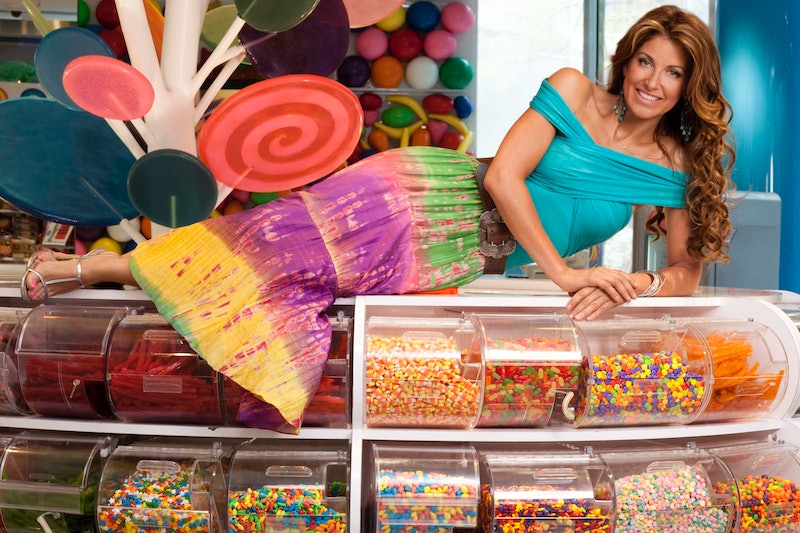 In Bustle’s Q&A series 28, successful women describe exactly what their lives looked like when they were 28 — what they wore, where they worked, what stressed them out most, and what, if anything, they would do differently. Below, Dylan Lauren, founder and CEO of Dylan's Candy Bar, reveals what her life was like just three years after she launched her first store in New York City.

With rainbow displays covering every wall and larger-than-life candy sculptures placed throughout Dylan’s Candy Bar, the store feels like a modern take on Charlie and the Chocolate Factory, founder and CEO Dylan Lauren’s favorite childhood movie. Lauren tells Bustle that she's always had a passion for candy, remembering how she looked forward to the Cadbury Creme Eggs that came out every Easter and loved the thrill of finally getting a red gum ball out of a gum ball machine. At just 25, Lauren translated her lifelong love of candy into a business and opened the doors to the first Dylan’s Candy Bar in New York City.

While it’s hard to imagine, the candy store was not Lauren’s first business venture. “I've always been entrepreneurial,” Lauren says. “I've learned that from watching my dad, Ralph Lauren.” After studying art history in college, she created Dylan’s Creative Events to plan charity events and launches for movies and products. She found herself consistently using candy for the decorations, the centerpieces, and the invitations, ultimately becoming frustrated that she couldn’t just decorate the spaces like Willy Wonka, she says. So, she began to think of new business ideas.

After circling through an event space, an art gallery, and a café, Lauren landed on Dylan’s Candy Bar, which essentially combines all those ideas into one whimsical space. While Lauren now has 26 stores across the U.S., Canada, the Bahamas, and Kuwait, with a new one opening in Hawaii, there was a point in time when her flagship store was her office. Lauren still pulls ideas from those early days of cutting out magazine images for inspiration, like this year's splatter paint Halloween collection. But even though her job title has stayed the same since she was 25 years old, in her first few years of business, Lauren was still figuring out who she was and what she wanted the store to become.

We’re going to take you back in time. How were you feeling on your 28th birthday? What were you thinking about?

DL: After I was 25, I always thought I was so old. So, 28 was one of those years where I was like, “ugh.” It wasn’t a milestone number, so it was kind of like whatever. But I just remember being like “Oh no. Now I’m old.” Now, when I look back, I’m like, “Oh my God. I want to be in my twenties.” Like half the people in my company are in their twenties, and I’m like, “What was I thinking?”

It was also a time of being very introspective because I already had three years in of knowing what I was doing. And so, you're just questioning not the work, but like, “Am I living in the right city? Am I on the right path? Do I want to do other stuff?”

What was your biggest source of anxiety when you were 28?

DL: I had certain relationships that I didn’t know where they were leading. I was never looking to get married. I think I was much more focused on my career. At the same time, I had boyfriends, and I think that was a big focus. I was like, “Where am I with this relationship? Is it going to end? Should it go to the next level?” I was balancing the love department with the work department.

Friends bring you back to your vision, who you are, the basics. I think that it’s easy to get so busy and not have time to see people.

When you were 28, what was like the one thing that you and your friends talked about the most whenever you got together?

DL: Guys. It was always about boyfriends or people they wanted to marry. That was pretty much the topic. It was about where to go to meet people. A lot of people I know were like, “My clock’s ticking. What do I do?” Thirty seems so old, and everyone thought it was like, “Oh no, it’s only two years away.”

What was the one moment in your career when you knew you made it?

DL: I knew it when I opened the doors. Or even before I opened the doors to our flagship, and I had signs up saying “Coming Soon,” and people kept trying to peek in. But just seeing how packed the store was and continues to be, I was like, “This is good. They’re saying what I want them to say, they’re taking away what I wanted them to get out of this.”

I opened our first store right around Sept. 11, 2001. On one hand, people were sort of scared to be in New York and the climate wasn't very happy, but it was the perfect time for something happy, colorful, nostalgic, American. And, so right when we opened our store, we were packed for months. People were like, “Oh my God. I just come here because it makes me happy.” I was providing an escape from the city.

What's the one piece of advice you wish you could go back and tell your 28-year-old self?

DL: Always keep friends who you grew up with or who supported you close because there’s a lot of people you start to meet in business and in the world who take you out of the grounded state that friends provide. Friends bring you back to your vision, who you are, the basics. I think that it’s easy to get so busy and not have time to see people.

At 28, you still have enough friends who are single, you have enough friends who don't have kids, enough friends whose parents are still around. It's like you kind of take for granted that everything starts to change at once. It’s different in different cities, but I think once everyone’s in their thirties, life is totally different. A lot of people move; a lot of people are really busy with their families. So, it's very important to have time to have fun. Still be social, don’t take everything so seriously. And appreciate the freedom you have before you start having more work and other obligations.

More like this
At 28, Vera Wang Worked At Vogue & Partied At Studio 54
By Allie Fasanella
At 28, Rachel Dratch Was Mingling With Steve Carell & Inhaling Secondhand Smoke
By Samantha Leach
At 28, Emma Thompson Was Already A Star — But Unhappy In Love, Actually
By Olivia-Anne Cleary
This TikTok Hard Seltzer Hack Involves A Milk Frother
By Alexis Morillo
Get Even More From Bustle — Sign Up For The Newsletter