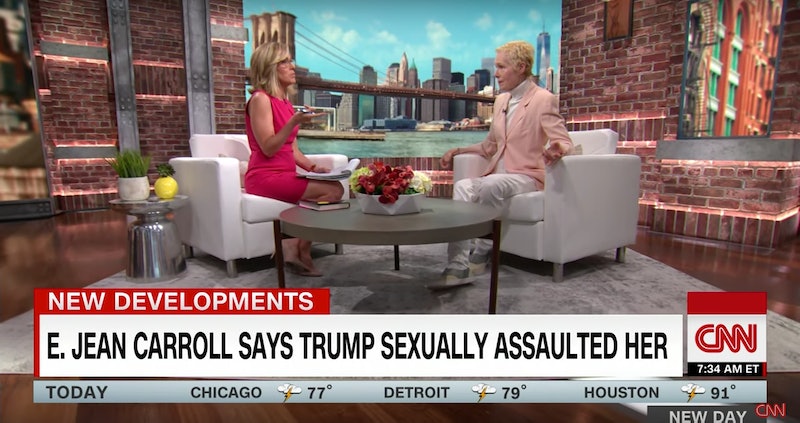 After accusing the president of sexual assault in an essay for New York Magazine last Friday, a famed advice columnist is opening up about her experience — and why she's so careful about how she describes it. In a new interview with CNN, E. Jean Carroll described President Trump's alleged attack as a "fight," and spoke out about why she prefers that word to "rape." Specifically, Carroll alleged that Trump assaulted her in a Bergdorf Goodman dressing room 23 years ago.

President Donald Trump has denied the allegations against him, describing them as "fake news." In a statement, he claimed that Carroll is using the accusations to generate publicity for her new book.

“I’ve never met this person in my life,” Trump said in a statement, per The Washington Post. “She is trying to sell a new book — that should indicate her motivation. It should be sold in the fiction section.”

Speaking with Carroll on Monday, CNN's Alisyn Camerota said that what the columnist described in her essay is essentially the definition of a rape allegation, even though she doesn't use that word in the New York essay. But Carroll said that she didn't want to see herself as a victim — for her, the alleged attack was a "fight." She suggested she also wanted the language she uses to send a message.

"I want women to know that I did not stand there," Carroll said. "I did not freeze. I was not paralyzed — which is a reaction that I could have had because it’s so shocking. No, I fought. It was over very quickly. It was against my will 100% and I ran away, out."

Carroll went on to explain that she's aware that other women experience sexual violence on a daily basis, which was another reason she was hesitant to label her alleged assault as rape. She pointed to the prevalence of sexual violence outside of her lived experience.

"It was a very, very brief episode in my life," Carroll told CNN. "Very brief. I am not faced with sexual violence every single day like many women around the world. And so yes, I’m very careful about that word."

As is often the case when women levy accusations against men in power, Carroll told the network she has received death threats since coming forward with her allegations. She told Camerota that although she has avoided personally reading responses to the piece, people close to her informed her that some readers were threatening her life.

In her interview with CNN, Carroll appeared unfazed by the alleged death threats. "I'm an archer," she quipped, according to footage of the interview shared on Twitter. "I have bows and arrows."

Carroll decided to come forward with the allegations because of her longtime career as an advice columnist, she told Camerota. After #MeToo took off, she said she was flooded with questions about women who had been mistreated and assaulted by men.

"That’s what made me come forward, lately, is because finally — I’m going to come clean," Carroll said. "Here I’m advising the women what to do, and I myself thought it was my fault and had been quiet. So, that’s changing."

Carroll is one of at least 15 women to come forward with sexual misconduct allegations against the president in recent years, all of which Trump has denied. Her accusation comes just as the president formally launched his 2020 reelection bid, but whether or not her accusations will have any impact on his campaign remains to be seen.