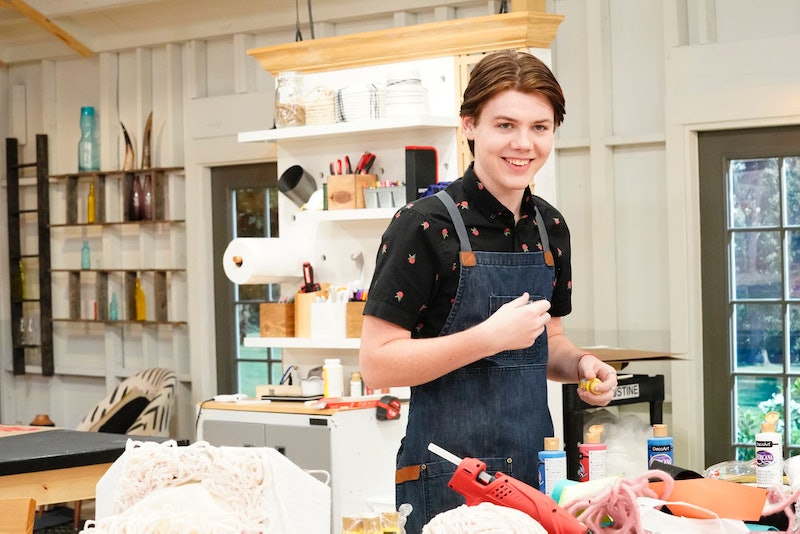 Nick Offerman and Amy Poehler's delightfully nice competition show Making It is back for Season 2, and with it comes a whole new group of talented craftspeople competing to become the "Master Maker" and win the show's $100,000 prize. Among these new Making It contestants is Eagan Tilghman, a 19-year-old from Meridian, Mississippi. If you don't recognize his name, you might recognize his work: Eagan went viral in 2017 after creating an epic Pennywise from It costume for his younger brother.

Suddenly, the self-taught costume maker was being featured in Cosmopolitan, the New York Daily News, and more. But for Eagan, who comes from a large family with seven brothers and sisters, seeing their reactions was more exciting than the newfound attention. "The best part of all this is hearing my little brother Shep brag on his Instagram livestream about how his older brother is 'famous,'" Eagan wrote on Facebook at the time, according to the New York Daily News. "All this is great, but my family is still the best part of all of it."

It's obvious from one look at his Instagram how close he is with his family, because it is covered in pictures of him dressing his siblings up in elaborate homemade costumes. Some standouts include The Grinch, the band Queen, and Edward Scissorhands.

Although Making It labels Eagan as a "Costume Maker," that is far from his only crafting skill. As evidenced by his Instagram, he can draw too.

He's also a puppet maker and set and prop designer. According to the Meridian Star, he recently helped with the sets and puppets for a local production of Little Shop of Horrors. You can see his creation in action in the video below:

This sort of work, not costume design, is actually the direction Eagan wants to take his career. He told the Meridian Star that he wants to do prop and set design for movies one day. "I have always, always, always loved movies as a kid," Eagan said. "They have always been my main source of inspiration. I would watch a movie and could barely finish it because I would want to get up and draw or make something I saw from the movie."

He added that he wants to enter that field so he can inspire other young people to chase their crafting dreams. "I want to be that source of inspiration for kids like me growing up, so they will have something to stem from just like I did when I was a kid," he said. On Making It, he listed Muppets creator Jim Henson as one of his inspirations, and it's not hard to see that influence in Eagan's own puppetry work.

If Eagan wins the grand Making It prize, he told the Meridian Star that he wants to use the money to move out of his parents' home and find a movie industry job. And with an impressive noodle puppet for the show's first challenge, he's already well on his way.

More like this
Yes, That's Christina From 'The Bachelor' In Taylor Swift's "Fifteen" Music Video
By Brad Witter
Rachel Fuda Gave Birth Just Weeks Before 'RHONJ' Season 13
By Brad Witter
Twitter Thinks This Is The Real Reason Zach Sent Christina Home On 'The Bachelor'
By Grace Wehniainen
Genevie Explained Why She Was Wearing A Sling During 'The Bachelor'
By Grace Wehniainen
Get Even More From Bustle — Sign Up For The Newsletter
From hair trends to relationship advice, our daily newsletter has everything you need to sound like a person who’s on TikTok, even if you aren’t.