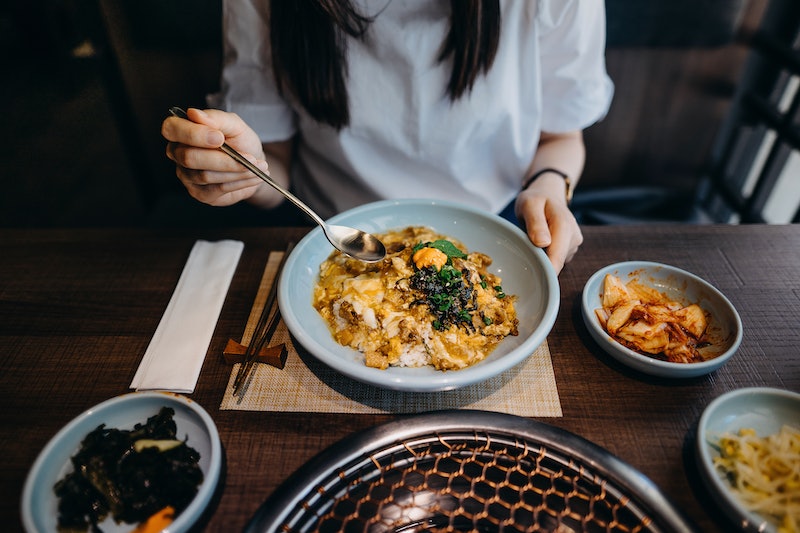 Protein is a pretty necessary part of our diets: it fuels a lot of important bodily functions, from muscle maintenance to the production of hormones and valuable enzymes. That's why many of us grew up thinking that protein — whether a juicy steak or a big bowl of beans — was the most important component of our dinner plates. But experts say that there is, in fact, such a thing as too much protein. The effects of too much protein on your body can be negligible — your body might just dispose of it — or be damaging to your health.

"It’s really difficult to be deficient in protein," Emily Fonnesbeck R.D., a nutrition therapist, tells Bustle. "Most of us get plenty, but the most amount of protein you are able to effectively use at one time is anywhere between 15 and 35 grams." That range depends on your individual energy consumption, body size, activity level, age, and a bunch of other factors — and those factors also affect how much protein is too much. When we eat protein, whether it's in eggs, meat, fish, or vegetable sources like tempeh or beans, it's broken down in the stomach into amino acids that are absorbed into the bloodstream. These amino acids can be transported all over the body to be used as needed. "Your body wants to have an amino acid pool in the bloodstream at all times," Fonnesbeck tells Bustle.

Our diets are an important source of these amino acids, but nutritionist Stephanie Papadakis, N.C., founder of Gut of Integrity, tells Bustle that different types of protein have different kinds of amino acids. "Animal sources like meat, fish, eggs, and dairy products contain all nine essential amino acids, but most plant sources don’t contain the exact amounts in the proper proportions (the exception being soybeans, which contain all of them)," she says.

If you consume more protein than you need, your body doesn't really have anywhere to put it. It has no way of storing up amino acids in fat or anywhere else, so if you have too many of them, your body converts them into glucose or some other source of energy, or simply decomposes them. But protein is harder for the body to convert into energy than carbohydrates or sugars. And excess protein doesn't automatically build muscle, Fonnesbeck says: "If you notice a boost in muscle mass or energy, it's not due to your excessive protein intake, it's due to your body adapting."

Too much protein can also be hard to digest. "Protein is digested in the stomach, and if your body doesn’t create enough stomach acid to break down the proteins, you’ll find yourself feeling bloated and overly full," Papadakis says. Other side effects include dehydration or even bad breath. "Your body and brain prefer to run on carbs, so if you’re not eating enough of them, it turns to using fat for fuel, which produces ketones," Papadakis says. If you've ever heard of the ketogenic diet, this is the principle behind it. Ketones make your breath smell slightly strange.

A high-protein diet can also affect your body because of the food it's replacing. If you've swapped out carbs for protein, you may risk ingesting insufficient fiber, which is a recipe for constipation; the body needs fiber to move waste efficiently through the digestive tract. One study also found that women on the keto diet experienced menstrual cycle disruptions, though it's not quite clear why.

Eating excessive amounts of protein is also linked to other health issues, though not necessarily because of the protein itself. Harvard Health notes that high-protein diets that contain a lot of dairy and animal products have been linked to higher cardiovascular disease risk and higher cholesterol levels. A 2013 review of studies on excessive protein consumption published in ISRN Nutrition also found evidence that eating too much protein can be linked to a host of different health problems, from bone loss to damaged organ health.

We need to eat protein for our bodies to function, but there's a point where enough is enough. If you're worried that you've been overloading with protein and are feeling blocked up or out of sorts, consult with your doctor about the right amount of protein for you.

Stephanie Papadakis, N.C., nutritionist and founder of Gut of Integrity