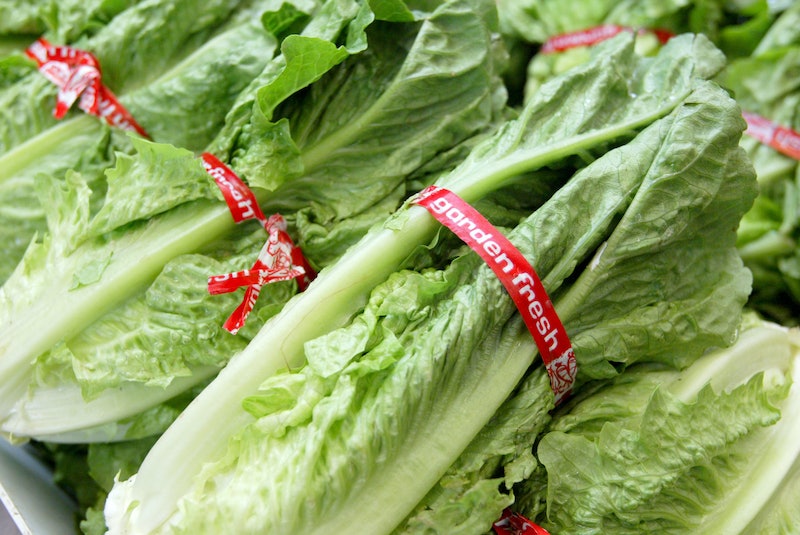 Earlier today, the New York Times reported that an E. coli outbreak linked to chopped romaine lettuce sourced from the Yuma, Arizona growing region has expanded to include 16 states, the Centers for Disease Control and Prevention (CDC) report. At least 53 people have been sickened so far by the tainted greens, resulting in 31 hospitalizations.

Restaurants and consumers should avoid any pre-chopped romaine lettuce from the Yuma vicinity, and should exercise extreme caution, as investigators haven’t traced the exact source of the contamination yet, according to The New York Times. “If you do not know if the lettuce is romaine, do not eat it, and throw it away,” the CDC advised in a recent statement.

According to Gizmodo, the infection currently spreading is a particularly nasty strain of E. coli called O157:H7, and five of the 53 people so far reported have developed serious complications via hemolytic uremic syndrome — which causes kidney failure. Fortunately, there have been no deaths reported so far.

Those affected by the contaminated lettuce range in age from 10 to 85, and seventy percent of them are female, The New York Times further reports. The first illness reported from the outbreak began on March 13, but any illnesses that started after March 29 may not be tallied yet as it typically takes two to three weeks for an illness to be tracked by public health officials. Idaho and Pennsylvania have reported the most number of cases so far, but E. coli linked illnesses have also sprung up in Alaska, Arizona, California, Connecticut, Illinois, Louisiana, Michigan, Missouri, Montana, New Jersey, New York, Ohio, Virginia, and Washington, according to Gizmodo — TIME reports that the largest number of cases have been reported in Pennsylvania, New Jersey, Idaho, and Montana.

Symptoms of E. coli infection include intense stomach cramps, diarrhea, and vomiting — symptoms lasting longer than a week can result in severe complications, and can be deadly.

The New York Times notes that the CDC was first made aware of the outbreak by officials in New Jersey, who noticed an increase in E. coli cases across the state. After analyzing data via PulseNet, a national network of laboratories cataloguing harmful bacteria samples from infected patients, CDC officials noticed that the strain was appearing across a number of states. “When we looked back into our PulseNet system we saw that there were other cases in other states with the same DNA fingerprint,” Dr. Laura Gieraltowski of the CDC told The New York Times.

The CDC discovered that others infected with the O157:H7 strain had also eaten chopped romaine lettuce before getting sick, but identifying the exact source of the greens requires samples. The short shelf life of lettuces combined with the time required to track down an outbreak makes pinpointing the exact source more difficult — most people don’t keep bags of greens around for several weeks, especially after getting sick from them.

The CDC advises that anyone who has store-bought chopped romaine lettuce at home, including salad mixes and salads, should not eat it — toss it out right away. Consumers are also advised to wash down and sanitize refrigerator shelving that’s come in contact with any chopped romaine. Even if you’ve eaten from a bag of romaine, and you haven’t gotten sick, throw it out anyway.

If you do come down with symptoms of E. coli infection, see your doctor on the double. You can help the CDC track the outbreak by writing down what you ate the week before you got sick, reporting your symptoms to the health department, and answering any questions public health investigators might have for you.