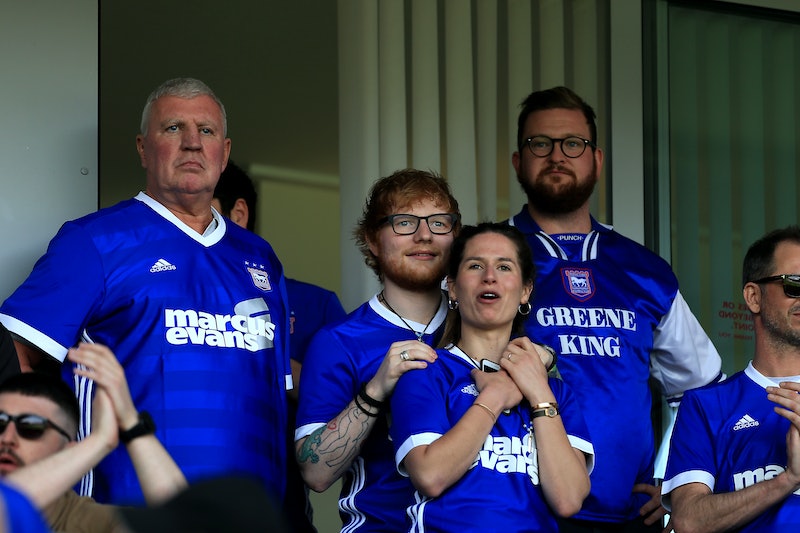 Can you hear those wedding bells? Can you hear them Chiming loud as can be heralding in the nuptials of Ed Sheeran and his wife Cherry Seaborn? But hey can you also hear that other sound? Yes, it is the choking tears of countless fans who really thought maybe they might be able to sway his interest. I'll tell you right now those fans are cray because if you look at the relationship timeline of Ed Sheeran and Cherry Seaborn you will see love has been waiting for this pair for quite some time.

Reports that the pair were secretly married in a super small and intimate family wedding over Christmas have set the internet alight. Ugh could you just imagine the cute AF acoustic music vibes going on at this event? Anyhow, the wedding allegedly took place in Seaborn and Sheeran's hometown, Suffolk, according to The Sun. Although it's not known precisely where the wedding took place, it is known that last year planning permission for a chapel on the grounds was denied, which scuppered any dreams of getting married in a tiny church of their very own. But planners be damned, it looks like the happy couple may well have got the low key event of their dreams — and it was a long time coming.

OK, so in true romance style, the pair met back in school at a super young age. Speaking to People, Sheeran explained: "I've known Cherry since I was 11". Ugh so Cupid basically drew back his bow right there and then, right? Well not so much, it was a while before musician Sheeran and the Wall-Street-working, hockey-playing Seaborn became an item.

So it was back in 2015 that the stars properly aligned. Basically Seaborn was busy earning crust working on Wall Street and Sheeran decided to ask his BFF Taylor Swift if he could ask Seaborn to her famous annual July 4 celebration. Sheeran spilled the beans to People:

"She worked on Wall Street in New York, and I had like six shows. It was around then, and we reconnected. I went on tour again, and then I went to Taylor's 4th of July party. I was texting, and she was like, 'I'm in Rhode Island at a 4th of July party,' and I was like, 'So am I.' I kinda said to Taylor, 'Can I invite one of my old schoolmates?' The rest is history."

The pair were spotted on vacation a whole bunch and Sheeran took a break from social media to work on his album. Probably also to fall in love... just saying.

2016: Swift Makes A Happy Anniversary Banner For Them

December 2016: It Is Reported The Pair Have Shacked Up

According to The Sun, Seaborn decided to move back to the UK in order to move in with her BF.

Sheeran's hit album contains all the lovey dovey-type songs he's become well known for, but many of them are said to be about Seaborn. Songs like Shape Of You are as sexy as they are romantic and don't even get me onto Perfect, which is just adorable.

July 2017: Making The World Jealous With Their Travels

Doing a bit of South America, why the heck not? The cute twosome enjoy travelling and getting to know each other better.

January 2018: Stop The Clocks We Have An Engagement

Sheeran took to his Instagram account to announce the happy news that he was engaged, saying: "Got myself a fiancé just before new year. We are very happy and in love, and our cats are chuffed as well xx"

Sheeran and Seaborn are photographed at a football match. Supporting Ipswich, they were looking not only loved up AF but like they are having a damn good time.

Drinking what looks like a well deserved bev in between shows, Sheeran and his beau are very cute as they sit backstage together.

The look of love remains pretty dang strong with these guys. No you're crying!

December 2018: At The Football Again

According to the reports regarding potential nuptials, this would have been just before their big day. No wonder they are looking insanely excited. OK, that might just be the football.