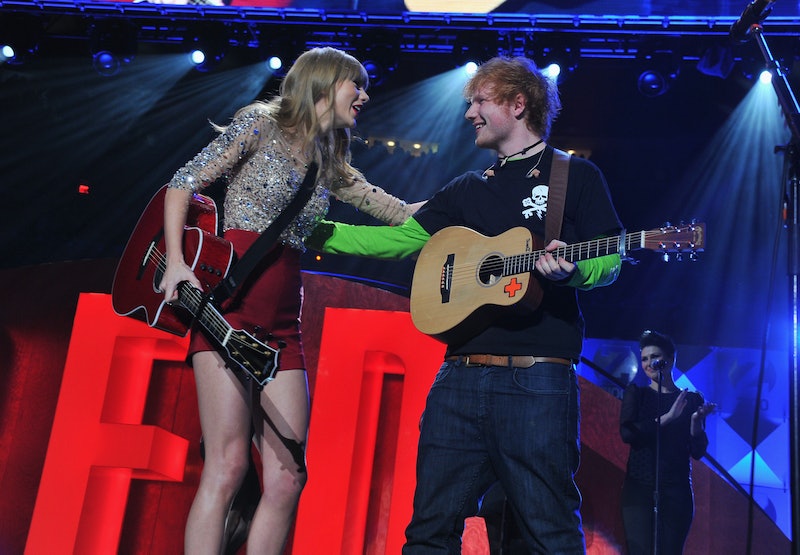 Even though it's been more than two years since the release of Ed Sheeran's last album, Divide, he's kept fans busy with his massive tour that started in 2017 and is still going. But earlier this month, he released a new song with Justin Bieber, and it turns out, that was the first single off his brand new album. And the singer just announced that he's giving his fans even more of what they want, which means Ed Sheeran's new album will be collaboration only. So even though jamming out to "Castle on the Hill" or "Shape of You" for the millionth time is fun, you'll have new tunes to obsess over soon.

On May 21, Sheeran posted cover art for a new single to his Instagram, asking if fans could guess who the next collab would be. This comes after the Bieber collab, "I Don't Care." But then two days later, he posted that the mystery guest on his next single, "Cross Me," would be none other than Chance The Rapper accompanied by PNB Rock. In the same post, he shared that a whole new album will be coming soon, and every single song will be collaborations with other, probably high-profile articles, if the first two singles are any hint.

"Before I was signed in 2011, I made an EP called No.5 Collaborations Project," he wrote in his caption. "Since then, I’ve always wanted to do another, so I started No.6 on my laptop when I was on tour last year."

Along with the No. 6 cover, he posted the 15-song track list, with all the featured artists blacked out, except for the two he's announced. "I’m a huge fan of all the artists I’ve collaborated with and it’s been a lot of fun to make," he continued in his post. "No.6 Collaborations Project will be out everywhere on 12 July. It’s available to pre-order from midnight tonight local time and my song with @chancetherapper and @pnbrock will be out everywhere at the same time x." So with a single dropping at midnight on May 23, and then a new album in the first two weeks of July, Sheeran is really out to give fans the song of the summer. Or songs, really.

As for the singles he's already released, "I Don't Care" is a certified hit, breaking the single-day Spotify streaming record with 11 million streams, according to Forbes. And his next collab single, with Chance The Rapper, has a mini-lyric video tease, with the caption, "Just know if you cross her then you cross me..."

He also posted a video of him sitting down with Charlamagne tha God, tirelessly listing off the seemingly endless amount of artists he has on the album. Of course, he can't actually announce who they all are yet, so not only is his mouth covered with a censor bar, but he's bleeped out too.

His last collab project No. 5 Collaborations Project, was released in 2011 and is currently available on Spotify for fans who might want to pre-game before No. 6.