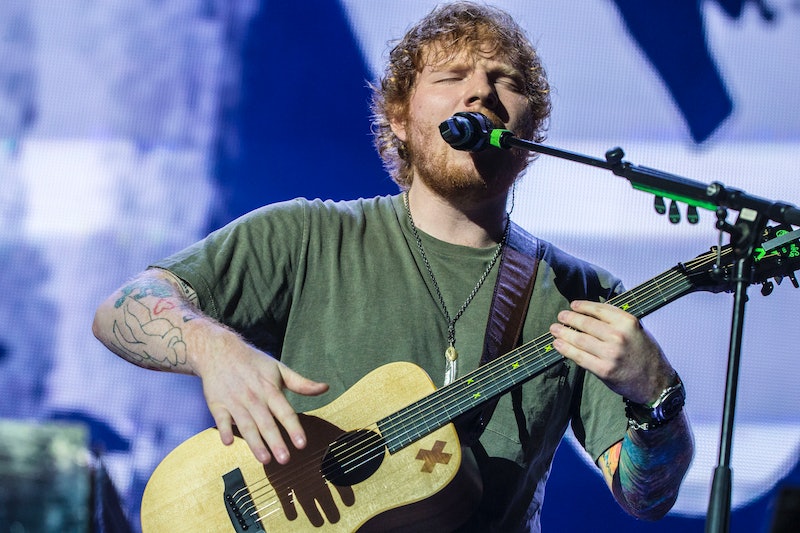 I always find myself endlessly interested in the anatomy of a song. How it starts, who writes it, who tweaks it, and, of course, who it was meant for. And it conintues to be a fascinating topic with Ed Sheeran's comments to BBC Radio 1 about his new song "Shape of You." Sheeran said that "Shape of You" was intended for Rihanna to sing. And while Bad Gal RiRi's musical vibe may initially seem a bit out of his wheelhouse, it's actually not a far stretch at all.

The reason why it's actually kind of fitting, is that Taylor Swift has become the unofficial Kevin Bacon of music. The gap of degrees of separation between her and other artists have been closing in in recent years and this case is no different. If you remember the drama-filled debacle from earlier this year, it was revealed that Swift co-wrote the song "This Is What You Came For," which featured both Calvin Harris and Rihanna. And, as all us Ed and Tay fans know, those two have collaborated before, as well. (For example, with the oldie but goodie "Everything Has Changed.") Meaning that Sheeran and Rihanna are more closely musically connected than you may have initially realized.

In fact, it's because Sheeran is actually totally in tune with Rihanna's sound and vibe that he decided not to hand the song off. Knowing what doesn't work for someone as important as knowing what does.

Sheeran explained in his interview that the song

"...is actually a really random one because I went in to write songs for other people with a guy called Steve Mac and Johnny McDaid, and we were writing this song and I was like, 'this would really work for Rihanna.' And then I started singing lyrics like 'putting Van The Man on the jukebox' and I was like, 'well she’s not really going to sing that, is she?' And then we sort of decided halfway through that we were just going to make it for me."

If you're bummed by what could have been, there are other ways this could still end up being a Rihanna song in the end. As one Twitter user brilliantly suggested, a remix would be awesome:

Seeing as how their different but still complementary styles of music could mesh, this doesn't seem totally out of the realm of possibility. So, what say you, RiRi and Ed?

More like this
Prince Harry & Lilibet’s Bedtime Routine Sounds Truly Adorable
By Kira Richards and Sam Ramsden
Someone Must Pay For What Happens To Bad Bunny In 'Bullet Train'
By Arya Roshanian
Who Is Camila Cabello Dating? She's Getting Cozy With Lox Club CEO Austin Kevitch
By Radhika Menon
Taylor Swift & Her Mom Clap Back Against The “Shake It Off” Plagiarism Lawsuit
By Jake Viswanath
Get Even More From Bustle — Sign Up For The Newsletter