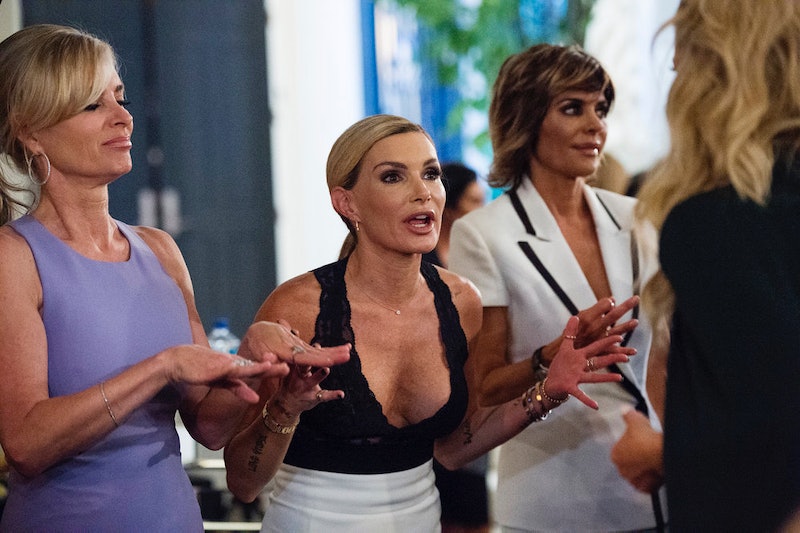 The Real Housewives of Beverly Hills Season 8 will be without a familiar face. Eden Sassoon isn't returning to the RHOBH, she reportedly announced on Facebook Wednesday, according to E! News. (The post seems to have either been since deleted or posted privately; a rep the reality star confirms the post was from Sassoon's Facebook.) Based on her announcement, the one season Friend of the Housewives couldn't be more thrilled to depart the show and take all of her long hugs with her. "I want to BE the one to share with everyone this news," she reportedly wrote. "I WILL NOT BE RETURNING TO #RHOBH NEXT SEASON."

According to her, the departure "#news" makes her "feel free & ALIVE to BE the REAL ME that was not shown to the #bravo world of viewers," she wrote according to E!. Despite all of the many downs she faced throughout her first and now only season, especially with Kim and Kyle Richards, Sassoon is "#grateful" for all of the experiences and lessons she learned during her time on Season 7. For her, this isn't the end, but a "NEW BEGINNING." As she reportedly wrote on Facebook,

I will be in full force with #love #hugs #truth and #compassion which are all things that make me shine. So if you can't handle my light .. please go be dim someplace else. The viewers that do resonate with my #spirit #pilates #smoothies #fashion #hair #stares #legacy #soberlife #singlelife #momlife #humor #discipline #daddyissues #lifeat43 #livbyeden #hereandnow #sisterwives #exhusband #familybytrade ✂️ #Sassoon .. Know I'm here and #youcantstopme.

She reportedly concluded her goodbye post, "Another chapter in #EdenLoveStory thank you @evolutionusa you know I truly Luv to LOVE YOU! @bravorhobh may u continue to create fun #drama always."

Sassoon also commented on the departure on Twitter and it seems like there's not hard feelings. She wrote:

Sassoon definitely ended her time on RHOBH with a bang by screaming at Lisa Rinna, and she clearly couldn't be more ready to move on.

For not being on Real Housewives that long, there's no doubt Sassoon made her mark. She's definitely one of a kind.