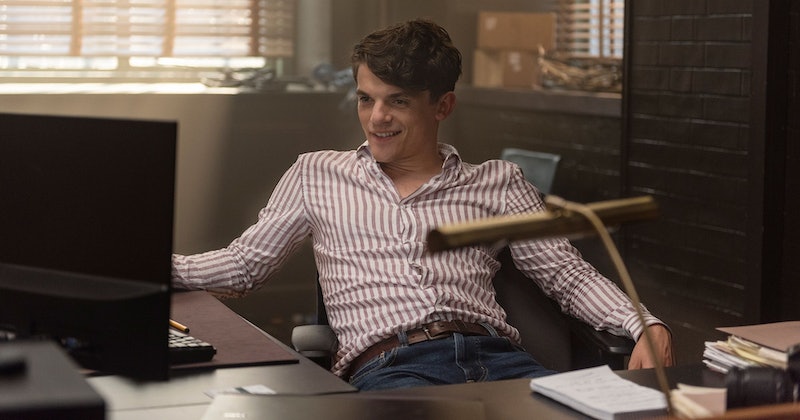 Season 2 of Killing Eve is grabbing a lot of headlines for obvious reasons. Not only is it one of the most hotly anticipated second season premieres of the year, but guys, the cast is incredible. A female led core cast is a rare thing in a drama in the espionage genre. However, let's not forget about the boys. Yes, the male characters in Killing Eve are also smashing it. One stand out new star is love-to-hate-him Hugo. And playing smug characters is nothing new for actor Killing Eve actor Edward Bluemel, who is used to playing characters people love to hate.

Bluemel, who hails from Somerset and attended Taunton School, has been doing pretty well since he graduated from the Royal Welsh College of Music and Drama in 2015. As a matter of fact, in the last 12 months he has appeared in not one but three hit TV shows. So not only Killing Eve, but killing it, as it seems. In this past year Bluemel has appeared in Sex Education, A Discovery Of Witches, and Traitors.

And guys, he kind of always does play smug gits. As a matter of fact, he has no problem admitting it. Speaking to the Evening Standard he revealed that the running joke is that the star low key plays one type of character. Talking of his relationship with his fellow actor housemates in Tooting Bec, Bluemel explained:

"The joke around my house is that I have zero range as an actor. Clearly I walk into a room and people think, God, you’d annoy people".

I guess you might worry that playing a bad guy gets boring or makes you feel sad. Hell no! He loves it! However, he admits to the Evening Standard that once that baby face gets a bit older he hopes to play more the nasty boss instead of the nasty intern.

"I'm hoping when I get older I won't still be the intern, maybe I'll be the annoying boss. I love playing parts that are a bit horrible, making people wince. I like being the bad guy".

After his first audition, he really didn't think he had the part. However, six weeks later he got the call back and suddenly there was a read through and he was surrounded by actual A-Listers. Speaking to the Evening Standard, he made it clear that he is basically any of us in the company of really famous people.

"I had Jodie on one side of me, Sandra next to her, then there was Julian Barratt who I've always loved, so I spent the whole read-through imploding on myself. As soon it was over I just grabbed the free food and legged it so I could remember how to talk".

The show's huge success was initially a shock to him, as when he auditioned for the role, he first season of the show had not aired yet in the UK. It only became the absolute national favourite while they were shooting the second season. Speaking to Town & Country, he explained the bizarre experience of being on an already famous show.

"When I first got cast, [it] hadn’t come out in the U.K. yet, and nobody was really talking about it at all. There were posters everywhere. At one point, me and Sandra were filming in Peckham in London and like across the back of the shot while we were filming, a massive double decked bus went past with just Sandra's face on it and Killing Eve in massive letters".

Sounds strange. Wait until you watch season 2 in its entirety - that's nothing.