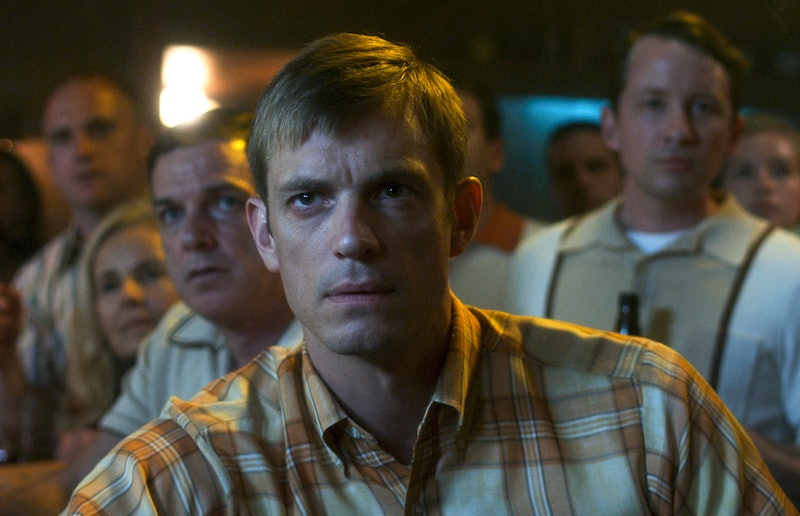 In Apple's For All Mankind, Joel Kinnaman stars as Edward Baldwin, an astronaut working at NASA during the '60s space race alongside Buzz Aldrin (Chris Agos), Neil Armstrong (Jeff Branson), and John Glenn (Matt Battaglia). Except, unlike many of the characters, Edward is not based on a real person. Instead, he functions as a nebulous stand-in for all the astronauts in that time period.

"[Edward is] kind of what you think of when you think of an astronaut from that era. And then you get him in the haircut and sunglasses and the suit, it's like he just stepped out of The Right Stuff," series co-creator Ronald D. Moore told Entertainment Weekly, referring to Philip Kaufman's 1983 film following the nation's first astronauts at the genesis of the space program. Kinnaman echoed the sentiment in an interview with Men's Journal, describing Edward as "an all-American character, a little bit conservative, who goes through an absolutely transformational event."

Unfortunately for Edward, that transformational event is not being the first man on the moon. In the show's alternate history, it's Russia, not the U.S., who is the first country to land on the moon. Had Edward and his colleague Gordo Stevens (Michael Dorman) not hesitated while piloting Apollo 10, it could have been them. (In real life, Apollo 10 was flown by commander Thomas P. Stafford, command module pilot John W. Young, and lunar module pilot Eugene A. Cernan, none of whom appear as characters in the show).

After the mission, Edward runs his mouth to a reporter about how the space program's director, Wernher von Braun (Colm Feore) is holding them back, and he's banned from flying. He then watches, frustrated, as the Russians win the space race — something he was so close to accomplishing himself.

"That's really what drew me to the role: How does that kind of personality deal with something like tragedy?" Kinnaman told Men's Journal in the aforementioned interview. "And I feel like I was able to break new emotional ground. I reached an emotional desperation I'd never achieved on camera before."

In order to prepare for the role, Kinnaman told BUILD that he watched documentaries about the space race, and discovered something unexpected: it wasn't landing on the moon that most affected the astronauts, but looking back at Earth.

"What I found really fascinating was all these accounts from astronauts that looked back at Earth from a distance and... for so many of them, that was a transformational experience — seeing that little blue orb in this vast ocean of black," he said. "It made them reevaluate what was important, and I think that was something that really made me feel like this is still a very important story to tell."