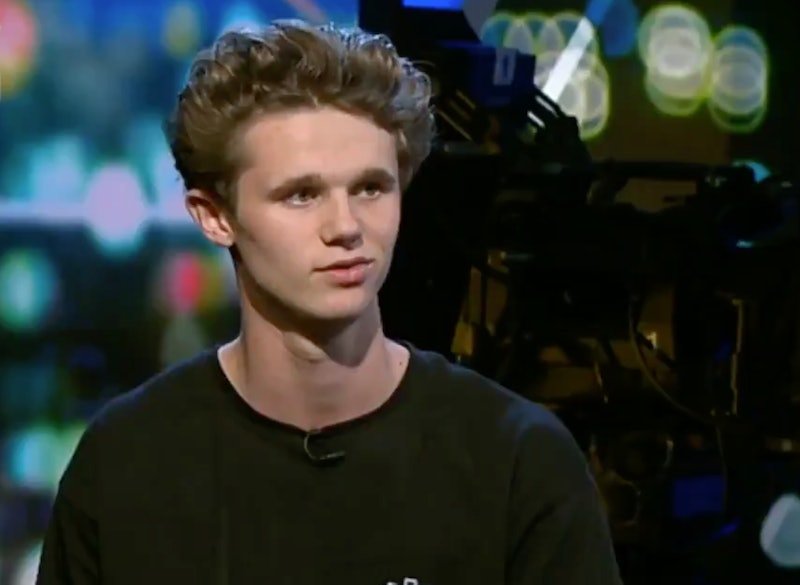 Australian Senator Fraser Anning got a nasty surprise on March 16 when a teenager egged him over his response to the shooting at two mosques in Christchurch, New Zealand. On Monday, the so-called "Egg Boy" gave his first public interview and announced that he's used the incident to raise thousands of dollars for victims of the shooting.

The 17-year-old Will Connolly smashed an egg into the back of Anning's head — earning the nickname "Egg Boy" — after the senator gave a speech arguing that Muslim refugees are a security threat at a Conservative National Party Meeting. Speaking to the Australian talk show The Project on Monday, Connolly said that, despite his protest, he believes that "there's no reason to physically attack anyone."

"I understand what I did was not the right thing to do," Connolly admitted to The Project. "However, this egg has united people and money has been raised. Tens of thousands of dollars has been raised for those victims."

Someone set up a GoFundMe page on Connolly's behalf after the incident and wrote that the money raised would go toward the teen's legal fees, as well as "more eggs." But Connelly now says that all of those funds — the total had reached nearly $80,000 by Monday afternoon— will be donated. "It's going to help people affected by the tragedy at Christchurch," he told The Project. "Every cent."

Connolly egged Anning while the senator was taking questions after the event. Anning reacted by immediately punching the teen in the face; when asked about that response, Connolly told The Project, "I understand what I did was not the right thing to do. I can understand why some people would react the way they did." News.com.au reported that Connolly's interview was well-received on social media and that many praised the teen's maturity.

On March 15, a shooting at two mosques in Christchurch, New Zealand left 50 people dead, including multiple children. Many leaders around the world quickly condemned hatred and Islamophobic violence. Anning, however, did the opposite. In a statement, the senator claimed "The real cause of bloodshed on New Zealand streets today is the immigration program which allowed Muslim fanatics to migrate to New Zealand in the first place."

Connolly told The Project that he had been "flat-out disgusted" by Anning's statement. Even so, he didn't enter the event with the explicit intention of egging the senator. "I actually went in there to listen to him for an hour — see if he'd change my mind — as I'm a pretty forgiving person," Connolly explained. "But then he started saying some more things ... which empowered me to egg him."

Anning vehemently criticized Connolly for egging him and suggested that the teen deserved those punches to the face. Anning has been widely rebuked for his response to Christchurch; the Australian parliament is expected to censure him when it reconvenes next month, according to the Australian Broadcasting Corporation.

As far as his newfound fame as "Egg Boy" goes, Connolly said he hopes that people fixate less on him and more on those affected by the Christchurch massacre. "Too much attention is actually brought away from the real victims' suffering," he told The Project. "We should be focusing on them."