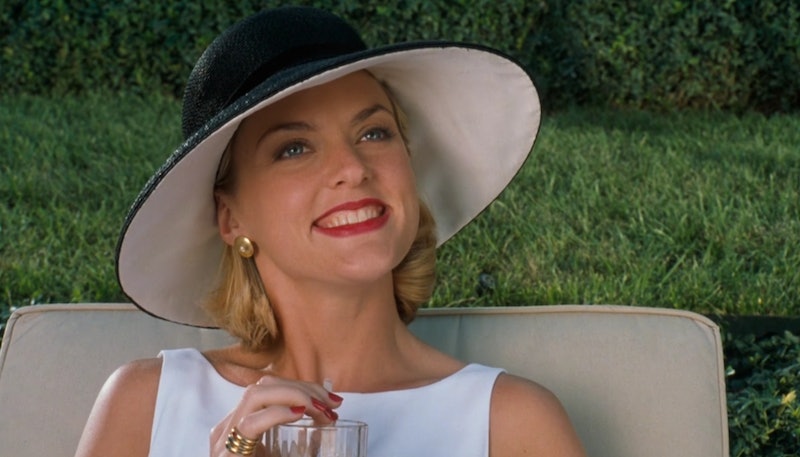 The 1998 remake of The Parent Trap will forever be a millennial classic, and it seems that it's not just fans of the film that reference it whenever and wherever they can. Following the recent news that Dennis Quaid (who played the twin's dad) is getting married again, his fictional wife-to-be Elaine Hendrix made a Parent Trap joke about the engagement.

In response to a tweet made by Page Six about the news, Hendrix advised Quaid's fianceé Laura Savoie to "[w]atch out for those twins" in an iconic callback to the 1998 film. And this isn't the first time that Hendrix has referenced the classic, oh no. Venture over to her Twitter feed, and you'll find a pinned tweet from 2018 where she replied to a tweet about the hate kids had for her character Meredith Blake. "I will ship every one of you brats off to Switzerland," she wrote, accompanied by a devil emoji.

There's plenty more where that came from, including a sarcastic congratulations for the twins birthday on Oct. 11, and a multitude of retweets supporting Meredith.

If you've got this far and have never seen The Parent Trap, the movie follows Hallie Parker and Annie James, (both played by Lindsay Lohan) who discover that they were separated at birth while their parents were splitting up. In the movie, they devise a plan to get their parents back together, which includes forcing Hendrix's character out of the picture.

Obviously, the movie is fictional (duh), but think about the trouble Savoie would be in now as Hallie and Annie would be 33-years-old. Their pranks would be off the charts. Although, by sheer coincidence, Quaid actually is the father of twins via his third wife Kimberly Buffington and they're around the same age as Hallie and Annie were in The Parent Trap. What are the chances?

Reportedly dating since the summer, Quaid proposed to Savoie fairly recently according to an interview he had with entertainment site Extra. He's currently promoting the film Midway in Hawaii, which is also the destination he decided to propose in. "It happened on the very northernmost point of Oahu, at Turtle Bay," he said. "It was kind of spontaneous. It was very much a surprise."

It's not clear how the two met, but according to Yahoo! Entertainment the two have "roots in Texas" as the actor is from Houston and Savoie "is a University of Texas at Austin student."