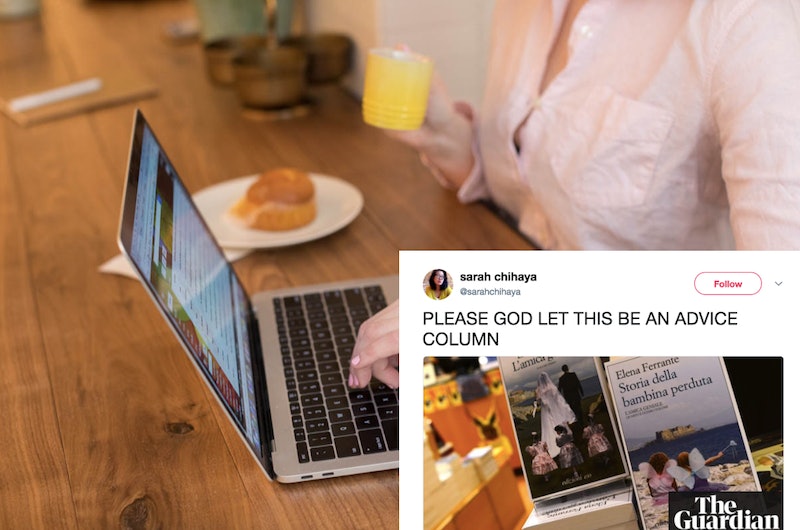 The Guardian announced earlier today that Elena Ferrante, the pseudonymous best-selling novelist and creator of the Neapolitan series, will be penning a weekly column for their newly-launched "Weekend" magazine, part of the company's design overhaul that began rolling out on Jan. 15.

"Every week, [Ferrante] will be writing a personal piece, covering subjects from sex to ageing to the things that make her laugh," said Weekend editor Melissa Denes in a recent statement. "I can’t wait to see where she will take us.”

We will now pause for a quick "shriek of joy" break. Take your time.

Ferrante, who publishes in Italian and works with English translator Ann Goldstein, rose to fame with her four-book Neapolitan series, which follows friends Elena ("Lenu") and Raffaella ("Lina") growing up in impoverished, violent, post-WWII Naples. My Brilliant Friend (Europa), the first in the series, hit American shelves in 2011, followed by The Story of a New Name (2013), Those Who Leave and Those Who Stay (2014) and The Story of the Lost Child (2015).

"Fierce female friendship," I would always say when I worked at a bookstore and fielded questions about the series. Usually, that was enough to warrant a purchase of the first book. And as millions of readers can attest, once you get one book, you can't help but devour the next three.

The rise of the Neapolitan series has been notable for a number of reasons, many of which revolve around Ferrante herself. She uses a pen name and seems to thrive on secrecy. She refuses to publicize her books. When her anonymity was unwilling unveiled by the New York Review of Books in 2016, Ferrante fans worldwide were enraged. They've since been waiting, anxiously, for their beloved writer's next move.

And then, of course, there are the books themselves. They follow two "ordinary" women - though, in the eyes of each other, they're anything but normal. They are one another's world, and isn't that how the intensity of friendship works? The women live their lives, experience violence, strife, pain and moments of brightness.

In addition to her new column, which will also be translated by Ann Goldstein and which Ferrante has called "a bold, anxious exercise in writing” (of course she did and of course it is), Ferrante is currently at work developing an HBO adaptation of the Neapolitan novels. This is shaping up to be the Year of Ferrante and ooh, baby, I am not mad at all, not one little bit.

As this morning's news began to spread, Twitter, predictably, began twittering. The most common sentiment? Dear Goddess in heaven above, please let this be an advice column.

And journalists chanting quietly "One of us."

And then, of course, there was just pure, unadulterated excitement.

As a writer who has made people care about and who has inherently valued the experiences of women, who has made poetry of the mundane, Ferrante has illustrated, again and again, the ways in which we are each our own protagonists. It's fitting, then, that the first on her column docket will be piece about her own first love.