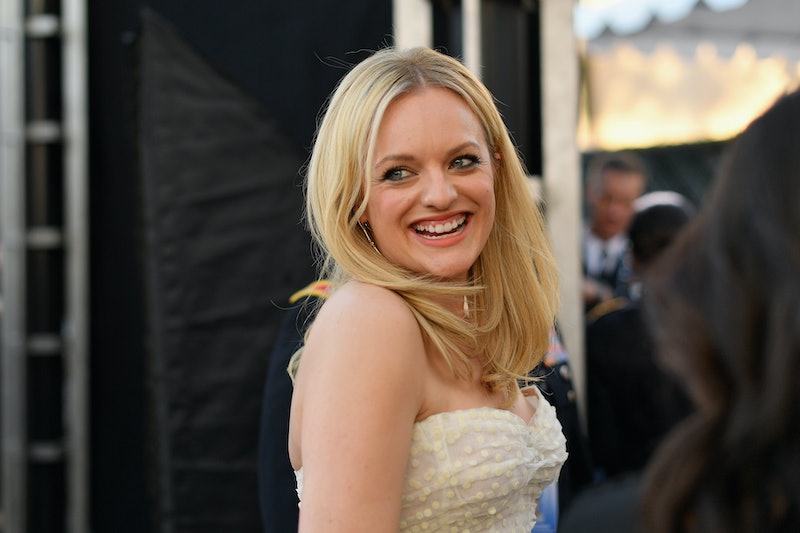 Your favorite Handmaid's Tale star has a new boyfriend, but don't expect to find out who the lucky guy is. Elisabeth Moss' recent comments about her love life show that she wants to keep things private, which makes total sense.

"I learned you just don't talk about it. Who really gives a sh*t whether or not I'm dating anyone? I hate to put that importance on it. I cringe a little," Moss told Marie Claire in an interview published Friday. The actor's elusive comments came after she shared that she's been going to sports games with her new partner in Toronto, where The Handmaid's Tale is filmed.

"I go with a special someone who also likes the Raptors and the Leafs," the Emmy winner told the magazine, referring to Toronto's basketball and ice hockey teams. "He shall remain nameless."

Moss also talked to Marie Claire about wanting children someday, though she's content being a cat mom at the moment. "I'd like to have that experience of loving something more than you could ever possibly love anything other than yourself," she told the magazine, referring to the possibility of having kids. "Of course you think about it when you're 36. You're like, How much time do I have?"

While it's understandable that fans would want to know everything they can about their favorite stars, it's more than within celebrities' rights to keep things to themselves. And in Moss' case, it sounds like her relationship is in the early stages. So it makes sense that she doesn't want to share too many details about her new beau, at least not yet.

For anyone who's in a relationship, it can be hard enough having your friends and loved ones sharing their own opinions about your decisions. But for celebrities, the pressure is way higher, with people weighing in about every choice they make. Stars' personal lives are no exception to criticism and speculation, especially when it comes to who they're dating.

Still, the actor hasn't kept fans totally in the dark about her new relationship. On Valentine's Day, Moss shared an Instagram photo of two shadows embracing on a beach, captioning it with a heart emoji. It's safe to guess that the silhouettes belong to her and her mystery boyfriend, who appears to be wearing a baseball cap in the picture. (Moss was also seen kissing a mystery guy in New York last August, but it's not clear who he was, or if it's even the same person she's currently dating.)

Whoever the actor is dating, though, it sounds like her love life is in a much better place than it was a year ago. Last May, Moss told Marie Claire U.K. that it was "difficult to find the time to give yourself to somebody" in a relationship, referring to how busy she is with work. But it looks like in the past few months, she's found more time to devote to her love life.

And if Moss does decide to reveal her boyfriend's identity, it will be on her own terms when she decides that she's ready. Until then, fans should respect the actor's privacy and trust that she's happy. Because based on the Valentine's Day photo and her recent comments to Marie Claire, it seems like that's definitely the case.