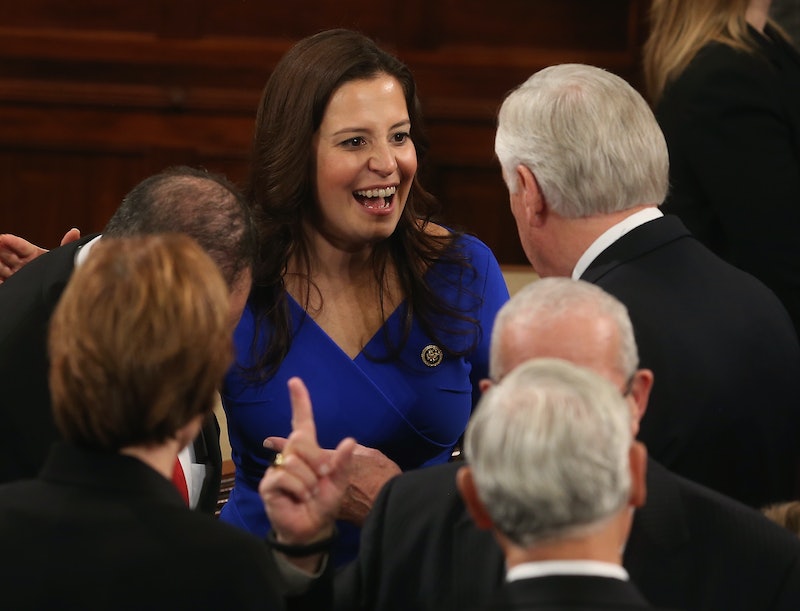 Even though the 2018 midterm election was billed as a wave of women because Democratic women won congressional races at record levels, Republicans saw some of their women colleagues voted out of Washington. Now, one Republican congresswoman is speaking out to try and change that. Rep. Elise Stefanik has a plan to elect Republican women, as she told Glamour — and she's not afraid of who's listening, least of all GOP leaders.

The problem in the past, she argued in the interview, was not the number of women who were recruited to run as Republicans. Rather, it was a lack of support in the time between "filing to run for office and winning on Election Day." Stefanik said that's where the Democrats do much better, with organized groups like EMILY's List helping candidates fundraise, develop campaign strategies, and more.

"We still have to focus on encouraging women to raise their hand to run for office, but that’s just the first step," she told Glamour. "A lot of times women haven’t run for office before, and this is their first time running. We saw that on the Democratic side these candidates learn how to be very strong candidates headed into the general election."

Through a leadership PAC, Stefanik plans to "provide a candidate development program," complete with help for strategy, budget, and messaging for "top key Republican women candidates." She said it will also help fundraise and work with partner organizations to provide the necessary "early support."

Stefanik told Glamour minority women will be included in the initiative. "I have a record of recruiting those candidates and I think that is important. It’s important not just to have women, but to have nontraditional candidates," Stefanik said, giving examples of diverse candidates she recruited in the 2018 election cycle.

As the former head of the National Republican Congressional Committee (NRCC), she was initially in the news in December following a small public spat with another Republican leader who's now running the NRCC. Rep. Tom Emmer called her moves to support women in congressional primaries "a mistake."

"It shouldn’t be just based on looking for a specific set of ingredients — gender, race, religion — and then we’re going to play in the primary," he told Roll Call.

"NEWSFLASH," Stefanik wrote on Twitter in response. "I wasn’t asking for permission." About a month later, Emmer came around and said the NRCC was "going to align" with Stefanik in upcoming races.

Stefanik elaborated on Emmer's evolution in her interview with Glamour. "He has since realized and listened that was not the right statement to make," she said. "We have to understand we have a problem and promote more Republican women. And then when they get to Congress, we need to elevate their voices."

She also spoke about when she realized how dire the gender gap was for Republicans in Congress. "After the election this year, when we first gathered as a Republican conference, I wasn’t planning on saying anything, but the room was so stark," Stefanik told the magazine. "I stood up and said, 'Take a look around. We are at a crisis level. We only have 13 women. This is unacceptable.'"

Now she's working to fix it.