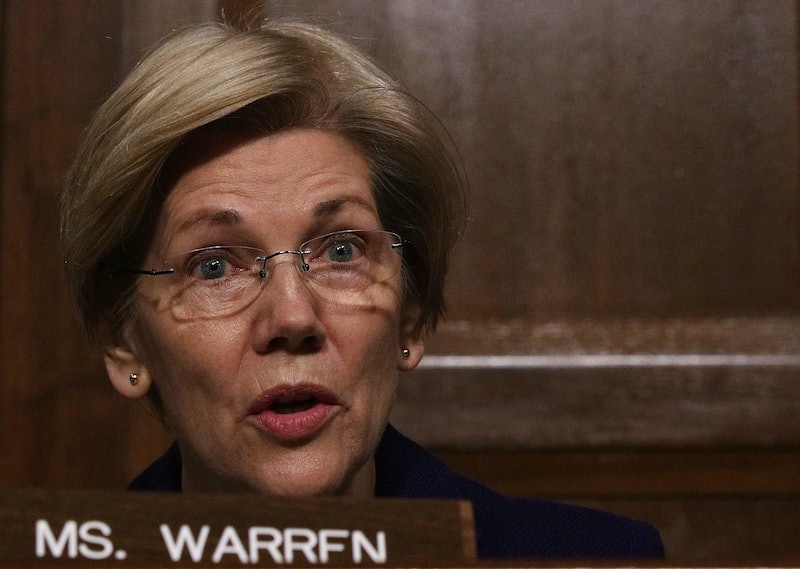 Not a week after she was silenced on the Senate floor for reading a letter by Coretta Scott King criticizing Jeff Sessions, Trump's Attorney General pick (who was subsequently confirmed), Elizabeth Warren protested Labor nominee Andy Puzder with a scathing open letter. The labor secretary nominee has been the executive of the parent company of Hardee's and Carl’s Jr since 2000, and he has received backlash from a number of workers' rights groups, including the Fight for $15. In the last 24 hours, it was reported that four Republican senators also may not even support the president's pick.

After being rescheduled four times, Puzder is scheduled to have a hearing for his potential secretary of labor position in front of the Senate Health, Education, Labor, and Pensions Committee on Wednesday.

Warren sits on that committee, and the Massachusetts senator made her views on the nomination of Puzder very clear in the biting 28-page letter she shared on Monday. The favorite of the progressive left wrote an open letter to him, questioning the ethics of his history as the chief executive of CKE Restaurants.

In the letter to Puzder, the senator grilled the fast food executive on how he would avoid conflicts of interest with CKE while questioning his relationship with his employees. Specifically, she wrote:

You've made your fortune by squeezing the very workers you'd be charged with protecting as Labor Secretary out of wages and benefits. Your long record of public comments reveals a sneering contempt for the workers in your stores, and a vehement opposition to the laws you will be charged with enforcing.

Just last year Puzder told Business Insider that he was looking into replacing fast food employees at Carls Jr. with robots to make things run smoother and cheaper. Puzder explained that he approved of robotic labor because "They're always polite, they always upsell, they never take a vacation, they never show up late, there's never a slip-and-fall, or an age, sex, or race discrimination case."

Warren was certainly not alone in her concerns. Not only have many of the issues she raised been discussed since Trump nominated Puzder, but her dissent was echoed by fast food activists and protesters in St. Louis and other cities where throngs marched against Puzder's nomination. Organizers from the minimum wage activism group Fight For $15 held protests at fast food chains and corporate offices around the country on Monday in opposition to his nomination.

Organizers rallied at the Carls Jr. headquarters in St. Louis and also reportedly urged people at home and across the country to call their representatives and urge them to oppose Puzder's nomination.

Granted, Protest campaigns against Rex Tillerson, Betsy DeVos, and Sessions didn't hinder their confirmations. Still, it will be interesting to see if Warren's letter makes all the difference when it comes to Trump's labor secretary pick.