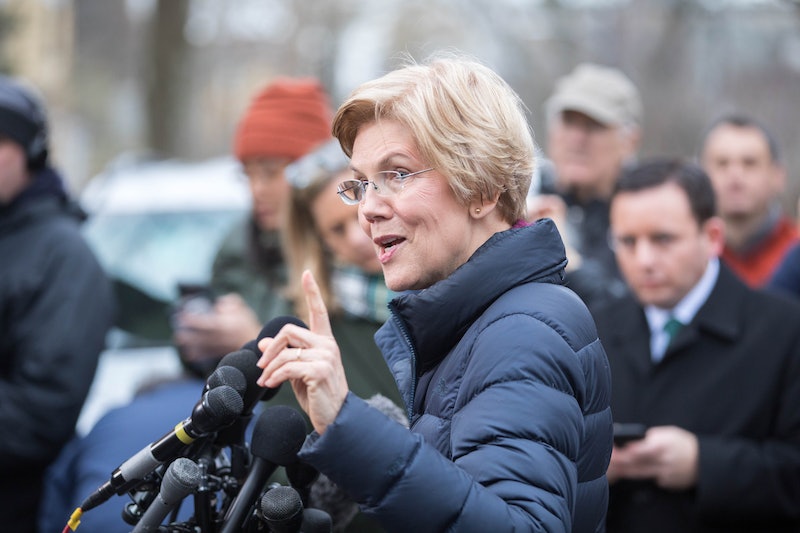 Massachusetts Sen. Elizabeth Warren is hitting the road just days after announcing that she'd officially formed an exploratory committee, a move often seen as the first step toward a presidential campaign. According to CNN, Warren will head to Iowa later this week in a visit that holds major potential for being the start of a 2020 campaign. Although perhaps best known for its corn, Iowa is also well known for kicking off Democrat's presidential primary process.

Facebook event pages shared on Warren's page revealed the Massachusetts senator plans to hold organizing events in Des Moines and Sioux City on Jan. 5 as well as a roundtable in Storm Lake that same day. On Jan. 4, Warren will host an organizing event in Council Bluffs.

"Elizabeth is fighting her heart out so that everyone gets a chance to create their piece of the American dream" the Facebook event pages noted. "That's why she's launched this exploratory committee: to have a real conversation about how to level the playing field for working families, and who is best to lead that fight."

Warren's upcoming travel plans are being hailed as likely more strategy than whim as Iowa is set to hold the nation's first presidential primary caucuses in February 2020. Good results in Iowa or other early caucus or primary states can potentially help candidates garner attention and support in states that hold later presidential primary events.

Warren announced the launch of her exploratory committee for president in a video first emailed to supporters Monday and later shared on her social media pages. "In the last two years, millions of people have done more than they thought they would to protect the promise of America," she said in the video. "And here's what we learned: if we organize together, if we fight together, if we persist together, we can win — we can and we will."

The 2020 Democratic primary field is expected to be one of the most crowded, with upwards of 30 legislators and politicians expected to potentially announce White House bids. So far Maryland Rep. John Delaney, West Virginia State Sen. Richard Ojeda, and entrepreneur Andrew Yang have all already officially launched 2020 campaigns. But Warren is perhaps one of the most high-profile Democrats expected to challenge President Donald Trump for the White House in 2020, which may give her a bit of a competitive edge come the primary.

In fact, a December poll conducted by CNN, The Des Moines Register, and Mediacom of likely Iowa caucusgoers found that 65 percent had favorable views of the Massachusetts senator compared to only 20 percent who viewed her unfavorably.