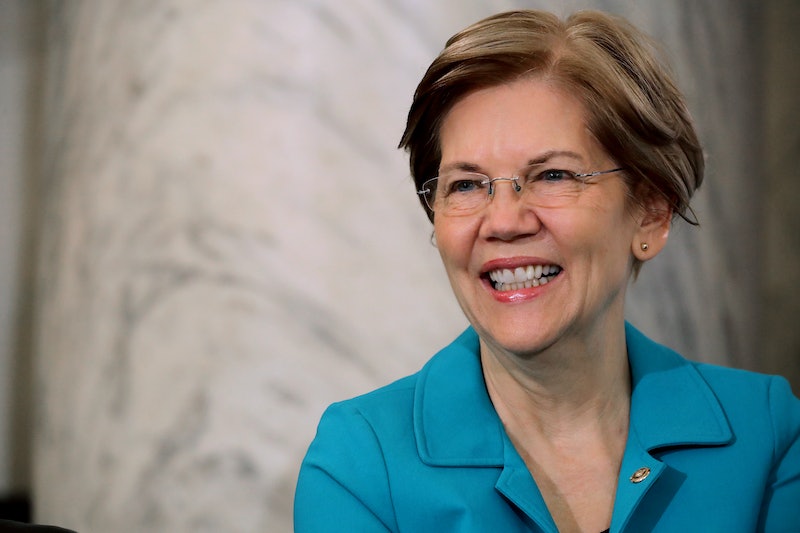 In a crowded race to become the 2020 Democratic presidential nominee, Sen. Elizabeth Warren is starting to introduce proposals that spell out exactly how she'd level the playing field for all Americans. Warren’s recent proposal for universal child care calls for the federal government to subsidize and quality-control a network of child care facilities, with free access for any family that makes less than 200 percent of the federal poverty line (that’s $52,500 for a family of four), and competitive wages for providers. Warren’s plan would be paid for by a new tax on ultra-millionaires. She also recently pledged to deny big donors special access to her campaign during the primary race.

Warren spent most of her career as a law school professor, and in 2008, she rose to prominence as chair of the Congressional Oversight Panel charged with reviewing the Wall Street bailout. Later, as an assistant to President Obama and special adviser to the secretary of the treasury, she led the charge to build the Consumer Financial Protection Bureau. Since being elected to the Senate in 2012, Warren has worked to tackle college affordability and student debt and rein in big corporations. She’s also used her seat on the Senate Banking Committee to hold some of America’s most powerful financial leaders accountable.

Bustle Contributing Editor Alicia Menendez spoke with Warren about her child care plan, including what’s not in it and who it covers; a forthcoming student loan debt plan; and her campaign finance pledge.

Alicia Menendez: There’s a lot in this child care plan. Let’s talk about what’s not in here. Why not include a home child care allowance for families who prefer to care for young children at home?

Elizabeth Warren: This is about building out a child care option for every family in America. There are other proposals about supporting families, and there are some good ones. But this one is about how we make sure that there is high-quality, affordable child care for every parent who wants to go to school or work, and needs that care outside their own home.

AM: The allowance is one that you have supported in the past. Why didn't it make its way into this plan?

EW: We're trying to build off two very successful child care programs that already exist in the country. The first is, our military provides high-quality, affordable child care for every service member. I'm on the Senate's Armed Services Committee. We had the generals in front of us, and I asked them about the child care that the military offers. It was really interesting to hear these generals weighing in on the importance of having child care available for everyone in the military, why that child care had to be high quality, and why it had to be affordable. They're clearly committed, and it shows in the program that the military has built. I want to make sure that that kind of option is available to every parent.

AM: Does one need to be a citizen in order to access the benefits of this plan as a caregiver, or does it extend to legal permanent residents and those who are undocumented?

EW: It extends to everyone, to all of our children.

AM: You're saying if you are an undocumented parent, you can have access to these child care centers, is that correct?

Early child care, child care for our youngest children, should be a profession in the same way it is for school teachers for third-graders or 10th-graders.

AM: What if you are currently a care provider who is undocumented or who is a legal permanent resident?

EW: Well, the bill has in it high national standards, the kind of standards that the military currently uses to certify their child care centers [Editor's note: The Department of Defense says that in general, you must be a U.S. citizen to work in its child development program]. And, by the way, 95 percent of military child care centers meet those standards. So there are standards that cover everything from the training of the child care workers to fire and safety regulations. You have to make sure that they have been met, because it's important that the care we're talking about is high-quality care. Now, having said that, this bill deliberately includes not just freestanding child care centers, but also child care centers that are home-based, so people who are receiving home care. But everybody has to meet quality standards, that's true across the board.

AM: How do you control the underlying cost of child care itself?

EW: We have a cost, and we need to pay it. By the way, I should add that one of the things this bill does — we're talking about parents, talking about children, but it's also about child care workers. This bill would raise the pay for many child care workers. It has a period of transition so that they can get appropriate training, but it emphasizes that people who are taking care of babies, toddlers, and preschoolers are often doing the same jobs as public school teachers, and they should be paid similarly. Early child care, child care for our youngest children, should be a profession in the same way it is for school teachers for third-graders or 10th-graders.

One of the big problems in this area is enormously high turnover, because the pay is so low that child care workers can't sustain themselves and their own families. So this is about bringing up that part of our child care infrastructure so that it's a real profession and people are paid a wage commensurate with that. Now, we've costed this out. Here's the thing: We can do this without costing working families a thin dime in new taxes. Our ultra-millionaire tax would apply. Only people who have fortunes greater than $50 million a year would pay 2 percent, and that would yield enough money that we could fully fund universal child care and early learning and still have $2 trillion left over.

Our country is crushing an entire generation of young people under the weight of debt.

EW: This is one that's personal for me. The very first bill I introduced as a senator when I got here was to refinance the outstanding student loan debt burden and bring down the cost for everyone who's struggling with student loan debt. I am committed to doing that.

AM: Do you believe that refinancing is enough?

EW: No. Refinancing can include loan forgiveness as part of it. I will continue to put forward proposals in this area, but the student loan debt burden in America is simply unsustainable. Our country is crushing an entire generation of young people under the weight of debt. The Treasury Department, the Fed, and the Consumer Financial Protection Bureau all have talked about the impact of high debt loans on the economy in general. I should say, the negative impact of high debt loans on the economy in general. Young people are not able to buy homes, they're not able to start businesses at the ages at which earlier generations that didn't carry those debt loans were able to do so. That not only affects their individual lives, it also affects our entire economy. Student loan debt is holding back the American economy. We need to cut the outstanding amount of student loan debt both to help people get back on their feet financially, and at the same time to help boost this economy to make it work.

AM: If you are going to expand the definition of who qualifies to have their debt forgiven, what would that look like? Who, then, do you see included in that expansion?

EW: Look, this is a piece that I'm going to have more on this position [later].

AM: Can you tell us when?

EW: Soon, very soon. But I can tell you this. Right now, we've got it exactly backward. In America today, if a young person goes to the mall and charges up $100,000 in stuff and then can't manage the payment, bankruptcy is an option. But if a young person goes to school and takes on $100,000 of student loan debt, there is no forgiveness available in bankruptcy. So when you ask the question about debt, you're asking the right question. But I just want to underline, we're exactly at the wrong place right now. It's exactly backward that someone who is trying to invest in their future — someone who tries to get an education so they can build something real in this country — runs the risk of taking on a debt burden that they can't pay, and will have no option to deal with it under current law. Do you realize there are people in America today whose Social Security checks are being garnished because of student loan debt? And you know, you can't garnish a Social Security check for failure to pay rent or a credit card. And so, that has to change.

AM: You recently announced you are not going to allow big donors to have special access to your campaign. With the $12 million you already have in your war chest, that includes the type of fundraising that you are now not accepting, will you return those donations?

EW: Actually, I gave away or helped redirect them for others — about $11 million in the last cycle. This is really, going forward, about how I want to spend every single day during this Democratic primary. I want to spend it with people who are trying to rebuild democracy with volunteers, with donors who pitch in 20 bucks, with people who are going to build the foundation for Democrats winning back not just the White House, but Congress, the governors' mansions, the state houses, up and down the ballot. Again, build the foundation for the changes we need to make in 2021. I'm going to do that every day.

This interview has been lightly edited for clarity.