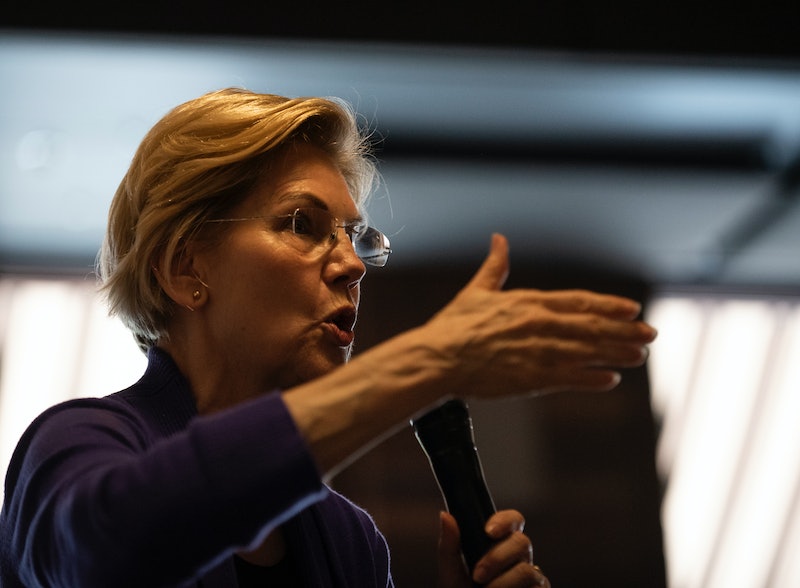 Several Democratic presidential contenders have held town hall meetings on Fox News, but don't expect the senior senator from Massachusetts to follow suit. On Tuesday, Elizabeth Warren turned down Fox News' town hall offer, calling the network "a hate-for-profit racket" that's "designed to turn us against each other."

Bustle has reached out to Fox News for comment. Here's Warren's statement in full, which she posted on Twitter:

I love town halls. I've done more than 70 since January, and I'm glad to have a television audience be a part of them. Fox News has invited me to do a town hall, but I'm turning them down — here's why...

Fox News is a hate-for-profit racket that gives a megaphone to racists and conspiracists — it's designed to turn us against each other, risking life & death consequences, to provide cover for the corruption that's rotting our government and hollowing out our middle class.

Hate-for-profit works only if there's profit, so Fox News balances a mix of bigotry, racism and outright lies with enough legit journalism to make the claim to advertisers that it's a reputable news outlet. It's all about dragging in ad money — big ad money.

But Fox News is struggling as more & more advertisers pull out of their hate-filled space. A Democratic town hall gives the Fox News sales team a way to tell potential sponsors it's safe to buy ads on Fox — no harm to their brand or reputation (spoiler: it's not).

Here's one place we can fight back: I won't ask millions of Democratic primary voters to tune into an outlet that profits from racism and hate in order to see our candidates — especially when Fox will make even more money adding our valuable audience to their ratings numbers.

I've done 57 media avails and 131 interviews, taking over 1,100 questions from press just since January. Fox News is welcome to come to my events just like any other outlet. But a Fox News town hall adds money to the hate-for-profit machine. To which I say: Hard pass.

In rejecting Fox News' overture, Warren is breaking with several of her fellow 2020 Democratic presidential contenders. Sen. Bernie Sanders, despite telling HuffPost in April that he thinks Fox News is a propaganda wing of the White House, held a well-received town hall on the network later that month, with the network's studio audience applauding many of his proposals. Sen. Amy Klobuchar also did a town hall on Fox News, and according to Politico, Sen. Kirsten Gillibrand and Mayor Pete Buttigieg are scheduled to do so in the future.

“To me, it is important to distinguish ‘Fox News’ from the many millions of people who watch Fox News,” Sanders explained in a recent appearance on The Daily Show. “I think it is important to talk to Trump supporters and explain to them to what degree he has betrayed the working class of this country and lied during his campaign.”

Warren is correct, however, that Fox News has been losing advertisers. Around 20 companies, including SanDisk, Samsung, SodaStream and Pfizer, dropped their ads from Tucker Carlson's program in December after he suggested that immigrants make America "dirtier," while Novo Nordisk, NerdWallet, and Letgo all stopped or suspended their advertisements on Jeanine Pirro's show after she claimed that Muslim Rep. Ilhan Omar, who wears a headscarf, is "Sharia-compliant."