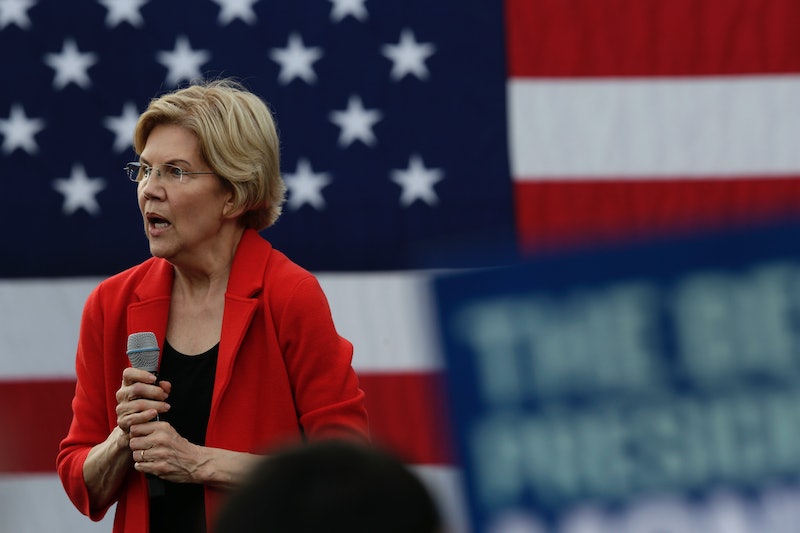 As Republican legislators in Missouri move to pass a near-total ban on abortion similar to bills already passed in Alabama, Georgia, and Ohio, one 2020 presidential hopeful is rolling out policy proposals aimed at fighting back. Sen. Elizabeth Warren has revealed a plan to protect abortion access nationwide in the wake of a wave of restrictive laws aimed at rolling back access at the state level and prompting a Supreme Court challenge to Roe v. Wade.

"This is a dark moment," Warren wrote Friday in a Medium post outlining her plan to protect abortion rights at the federal level. "People are scared and angry. And they are right to be. But this isn't a moment to back down  —  it's time to fight back."

The Massachusetts senator and 2020 Democratic candidate went on to lay out a series of policy proposals that would overhaul federal laws to not only protect abortion rights but expand them. She urged Congress to pass laws "that ensure real access to birth control and abortion care for all women" and "that will stand no matter what the Supreme Court does."

Citing studies showing voter support for Roe v. Wade, Warren called on Congress to establish "affirmative, statutory rights" to abortion at the federal level, thereby prohibiting states from interfering in either a health care provider's ability to provide abortions or a patient's ability to access them. "The establishment of these federal statutory rights would invalidate contradictory state laws, such as the Alabama, Georgia, and Ohio bans," Warren wrote, adding that "they would also end the political games being played by right-wing courts to try and narrow Roe's protections."

"And because these federal protections would be valid on a variety of constitutional grounds  —  including equal protection and the commerce clause  —  they would ensure that choice would remain the law of the land even if the Supreme Court overturns Roe," she continued.

Warren also called on Congress to pass The Women's Health Protection Act, which would overturn and block state-level Targeted Regulations on Abortion Providers (TRAP) laws such as those requiring abortion providers have hospital admitting privileges or conduct medically unnecessary ultrasounds before the procedure.

To guarantee all women have access to reproductive health care, Warren urged Congress to repeal the Hyde Amendment, which currently prohibits federally-funded health care programs like Medicaid from offering abortion coverage, and pass the EACH Woman Act to bar abortion restrictions private insurance plans. The 2020 hopeful also called for expanding conversations about abortion coverage to include immigrant women. "All women  —  no matter where they live, where they're from, how much money they make, or the color of their skin  —  are entitled to access the high-quality, evidence-based reproductive health care that is envisioned by Roe," Warren wrote.

Warren's plan also included proposals to support Title X family planning funding, curb violence at abortion clinics, end the stigma and discrimination that can follow those who choose abortion, and repeal the global gag rule once and for all.

"The next President can begin to undo some of the damage by appointing neutral and fair judges who actually respect the law and cases like Roe instead of right-wing ideologues bent on rolling back constitutional rights," Warren wrote. "But separate from these judicial fights, Congress has a role to play as well ... Congress should act to ensure that the will of the people remains the law of the land."

While Warren's plan may be the most comprehensive, she's not the only presidential hopeful to have released a plan for protecting abortion access. Fellow 2020 Democratic presidential candidate Sen. Kirsten Gillibrand has also laid out a strategy for protecting abortion rights. On Thursday, the New York senator vowed to codify Roe v. Wade into law, repeal the Hyde Amendment, and establish funding to ensure reproductive health center access in every state if elected president.