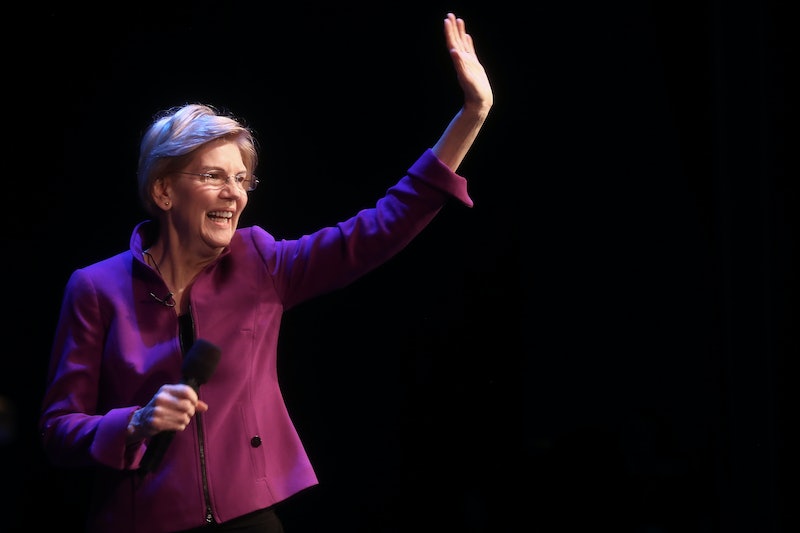 At a time when money's influence over Washington is under intense scrutiny, one Democratic presidential hopeful has announced she's making big changes to how she manages her time on the campaign trail. In an email to supporters, Elizabeth Warren said her 2020 fundraising plan will value each donor equally, suggesting that she will not be beholden to her wealthier supporters just because they might contribute more money.

"My presidential primary campaign will be run on the principle of equal access for anybody who joins it," the Massachusetts senator wrote in a campaign email that went out late Monday morning. "That means no fancy receptions or big money fundraisers only with people who can write the big checks. And when I thank the people giving to my campaign, it will not be based on the size of their donation."

She went on to explain that wealthier donors won't be able to buy special one-on-one time with her at campaign events, or even purchase better seating. She also said she would eschew extensive obligatory phone calls with those people who might donate significant sums to her candidacy. Instead, Warren said, she wants to use that time interacting with voters, on the ground.

"Consider this," she wrote. "For every time you see a presidential candidate talking with voters at a town hall, rally, or local diner, those same candidates are spending three or four or five times as long with wealthy donors – on the phone, or in conference rooms at hedge fund offices, or at fancy receptions and intimate dinners — all behind closed doors."

Her announcement evokes memories of the 2016 Bernie Sanders campaign, which heavily relied on small dollar donations. Some have contended that his success in fundraising that way has changed how Democrats will choose (or be expected) to raise money in the future. (Notably, Sanders reportedly raised about $6 million dollars in one day after announcing that he would be running again in 2020.)

"I am grateful for every donation we get — and we need every single one! — but what matters more, much more, is that everybody who supports my campaign is treated equally, regardless of how much they can afford to give," Warren wrote in her Monday email. "And doing things this way will give me hundreds and hundreds of hours of time back to spend with more voters, grassroots donors, and volunteers."

It's important to note that this decision isn't entirely out of left field for Warren. Since she first campaigned for the Senate, she has fashioned herself as a political outsider who was willing to challenge norms, especially where finances are concerned. It appears that she has continued to embrace this reputation in the early days of her first bid for the presidency.

"We’re going to take the time presidential candidates typically reserve for courting wealthy donors and instead, use it to build organizing event after organizing event in the early primary states and across the country," Warren wrote on Monday. "Organizers and volunteers are the core of building this campaign and expanding our reach, and I’m going to spend my time supporting them."