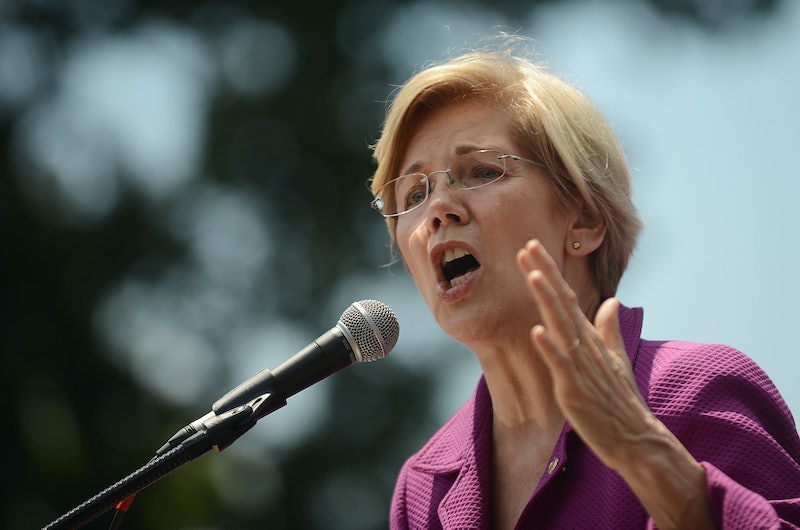 As speculation grows over how President Trump's executive order to end family separation will play out, Massachusetts Sen. Elizabeth Warren visited two immigration facilities in Texas to see the situation firsthand. Warren described what she saw at one of the facilities as a "disturbing picture."

Warren first visited the processing center in McAllen, Texas. She looked somewhat distressed afterward in a CNN video, speaking to reporters about the facility conditions and the families that are currently being held inside. She added:

There are children by themselves. I saw a six-month old baby, little girls, little boys... Family units are together if it’s a very small child, but little girls who are 12 years old are taken away from the rest of their families or held separately. They’re all on concrete floors in cages. There’s just no other way to describe it. They’re big chain link cages on cold concrete floors and metal blankets handed out to people.

After visiting the McAllen facility, Warren then went to the Port Isabel ICE detention center, where she visited and spoke with detained mothers. ICE has said Port Isabel is its "primary family reunification and removal center for adults."

When she left the Port Isabel facility, Warren said "It's clear. They’re not running a reunification process here." Bustle has reached out to DHS for comment.

Port Isabel is a remote facility 23 miles from Brownsville, Texas, with a capacity of 1,200. Sirine Shebaya, a civil rights lawyer who spent Friday interviewing parents, told The Washington Post that the center "seems to be at capacity."

Jodi Goodwin, an immigration lawyer, also spoke to The Post, saying "Port Isabel is a prison and it absolutely has no infrastructure to hold children." For parents seeking asylum, but facing criminal prosecution for illegally crossing the border, Goodwin said some have been "offered the choice to drop their asylum claims and accept deportation. And then once they've accepted deportation they'll get their children back," — essentially forcing a choice between staying separated in the United States, or returning to a potentially deadly home as a family.

HHS said on Saturday that it had 2,053 "separated minors" in its custody as of June 20, and that Customs and Border Patrol (CBP) had already reunited 522 children with their families. According to the statement:

The United States government knows the location of all children in its custody and is working to reunite them with their families.

However, in a video taken by reporters, Warren said ICE officials "made clear, this is not a reunification center." She added, "There will be no children brought here, there will be no families brought together in this place. All that's happening here is the detention of mothers and fathers who lost their children."

Warren said she pressed the ICE officials she spoke to for specifics, and was told that families would be reunited individually as parents are released from the detention center, but that ICE had no firm timeline or detailed plan in place to locate the children and match them with their parents. Already the process of reunification has proven difficult, with reports of parents being deported home without their children.

"The mothers I spoke with have no clue about where their children are," Warren said, "or any shape of a plan to reunite them with their children. Nothing."

Correction: A previous version of this story mischaracterized Warren’s description of the processing center. It has been updated to accurately reflect her comments.

More like this
What To Know About Martin Bashir After Watching 'The Crown'
By Bustle UK
Read Dan Levy's Heartbreaking Message After The Club Q Shooting
By Stephanie Topacio Long
Iran Has Issued A Death Sentence Over Mahsa Amini Protests
By Catharina Cheung, Darshita Goyal and Maxine Harrison
Tim Miller From ‘The Texas Killing Fields’ Assisted With Another True Crime Mystery
By Grace Wehniainen
Get Even More From Bustle — Sign Up For The Newsletter