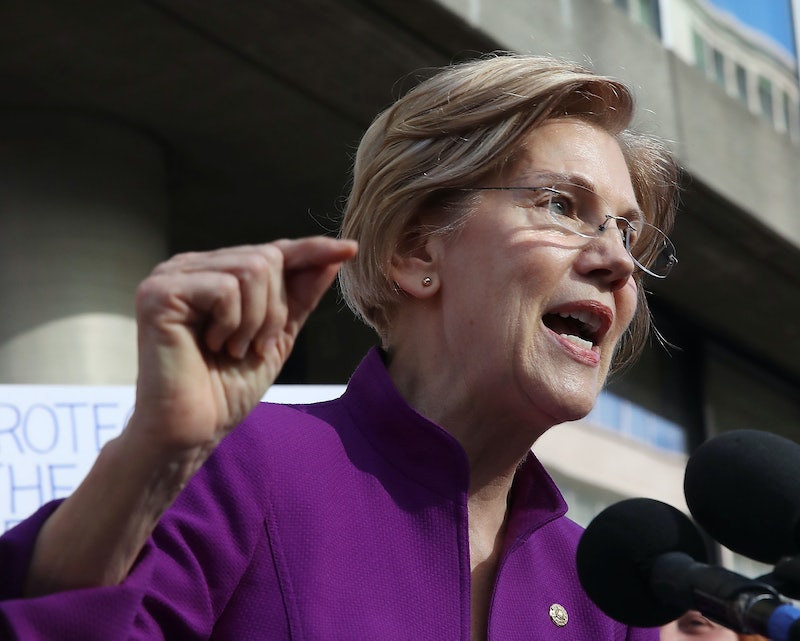 Last week, a Saudi-led airstrike hit a school bus in Yemen and killed at least 40 children, according to the Red Cross, shocking the world. The United States sells Saudi Arabia some of the bombs it uses in Yemen, and the Pentagon says it doesn't track what's done with those munitions. But one senator has doubts: Elizabeth Warren wrote a letter about the Yemen bombings to the leader of U.S. forces in the Middle East on Tuesday, demanding more answers.

Warren's letter addressed Gen. Joseph Votel, whom she previously interrogated in March when he appeared before the Senate Armed Services Committee. At the time, she asked Votel whether the Pentagon tracked what Saudi forces did with the bombs sold to them by the United States. "Senator, we do not," he replied.

But a report from The Intercept earlier this month suggests otherwise. An intelligence report on a May airstrike in northern Yemen reportedly included "what appear to be comments from an American intelligence analyst," according to The Intercept, meaning that a U.S. representative reportedly supervised the attack. Lt. Cmdr. Rebecca Rebarich tells Bustle, “We continue to work with Congress on this issue and provide them information when requested.” Rebarich adds that the U.S. Central Command doesn't discuss details of intelligence reports.

"The reported presence of U.S. advisors in a command center responsible for actively approving and directing such airstrikes [...] raise[s] questions about whether the U.S. does in fact have the capability to track the origins, purpose and results of U.S.-supported airstrikes should it choose to do so," Warren wrote in her letter.

Her memo comes on the heels of an attack on Yemeni civilians that drew condemnation from around the world. Last Thursday, an airstrike in the Saada Province hit a bus full of children returning from summer school. The Red Cross says that at least 51 people were killed in the attack, including 40 children, and that the majority were under 10 years old. The head of the United Nations Children's Fund (UNICEF) called the strike "a low point in the country's brutal war," which the United Nations has already labeled the world's worst humanitarian crisis, according to CNN.

While the origin of the munition used in the school bus strike has not been independently verified, some reports claim there are indications that it might have been an American MK-82 bomb, according to Asia Times. When Vox reached out to the U.S. Central Command to ask about whether U.S. weapons had been used in the attack, Army Maj. Josh Jacques said that "we may never know" because "we don't have a lot of people on the ground." Lt. Cmdr. Rebecca Rebarich told Axios that "U.S. Central Command was not involved in the airstrike in Saada."

In response to The Intercept's reporting on the May airstrike that may have been overseen by a U.S. intelligence officer, Eric Eikenberry of the Yemen Peace Project said that "the priorities of General Votel and the rest of the administration are obscene." He told The Intercept, "We knew that the United States was providing the fuel, weapons, and intelligence for coalition strikes, and now we know that the U.S. is perfectly capable of assessing strikes on civilian targets that use U.S. munitions."

An increasing number of congressional representatives are speaking out against aiding the Saudi intervention in Yemen, including by raising the prospect that the United States has been abetting war crimes. Warren is among this group of politicians; in March, she co-sponsored a bill that would have ended the United States' involvement in the conflict. (The bill was ultimately voted down, per HuffPost.)

In her letter to Gen. Votel on Tuesday, Warren asked for further information about "the role of U.S. advisors in the targeting process and airstrike approval." She requested that he clarify whether any members of the U.S. military are supervising the Saudi-led operations.

"I believe that the public has an interest in understanding the full scope of U.S. support and operations in Yemen," she wrote, "and accordingly request that you provide unclassified answers to my questions to the extent possible."