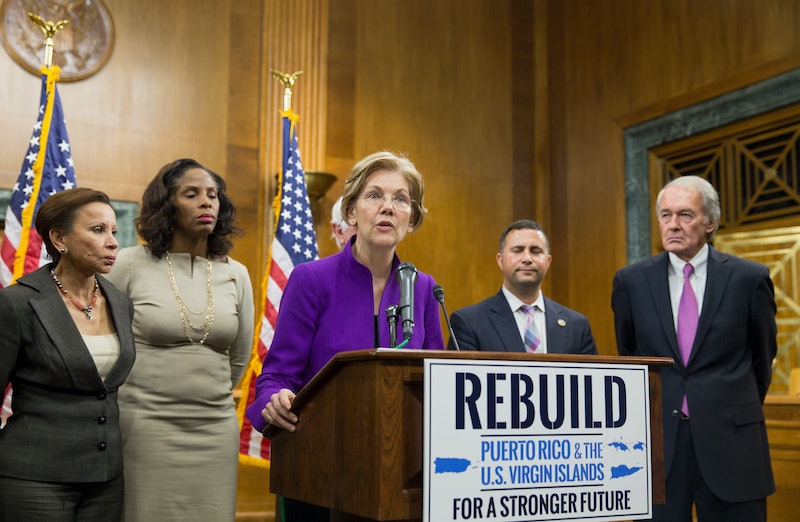 Two years after Hurricane Maria devastated Puerto Rico, Sen. Elizabeth Warren is proposing a radical plan to help the island recover, both from the hurricanes and its longstanding economic struggles. In a Medium post, Warren said her Puerto Rico debt relief plan would prioritize the island's recovery by wiping out its debt — and in doing so, put an end to Wall Street's decades-long profiteering off of that debt.

"Today, I am re-introducing the U.S. Territorial Relief Act, legislation that would provide Puerto Rico with a path to comprehensive debt relief," Warren announced in a Medium post. "This legislation would give U.S. territories like Puerto Rico the option to terminate their debt if they meet certain criteria, like being struck by a disaster, suffering major population loss, and staggering under overwhelming debt. The Territorial Relief Act would give Puerto Rico a shot at getting out from under its crushing debt load and building a future for itself."

Warren said that "the Trump Administration’s inept response" to Hurricanes Maria and Irma "denied families the help they needed and made it harder for them to recover." However, she also argued that Puerto Rico's debt — which totaled around $70 billion as of 2017, according to CNN — has been one of the biggest obstacles to the island's post-hurricane recovery efforts.

Much of Puerto Rico's debt has been purchased by hedge funds, mutual funds, and retail investors; as Forbes reported back in 2013, this means Wall Street investors profit directly from the economic deterioration of Puerto Rico.

"These Wall Street firms are called 'vulture funds,'" Warren explained. "They buy the debt of a borrower in trouble, usually for pennies on the dollar, and then pick the bones clean when the borrower can’t pay. For Puerto Rico, that means the Wall Street investors get paid by slashing services, selling government assets, and undermining any real chance the island might have to recover economically."

As Warren also noted, a 2016 piece of federal legislation called PROMESA placed much of Puerto Rico's management under the control of an oversight board made up of political appointees. Warren said that the oversight board, which is currently in the midst of a protracted legal battle over its membership, has "slashed basic government services throughout the island and imperiled Puerto Ricans’ pensions, while generously helping out the Wall Street firms that hold Puerto Rico’s debt."

In addition to canceling Puerto Rico's debt, Warren's legislation would also establish a fund so that certain holders of that debt — namely Puerto Ricans, individual investors, and credit unions — would be compensated when the debt is terminated. Warren clarified that "vulture funds and bond insurers would not get a penny from this fund," though she did not reveal how that fund will be paid for. Lastly, Warren's plan would impose an independent audit of Puerto Rico's debt.

"The United States needs leadership that respects all its citizens, even those living in the territories," Warren writes. "And in Puerto Rico’s case, respect means placing the lives of millions of citizens ahead of Wall Street’s profit margins."