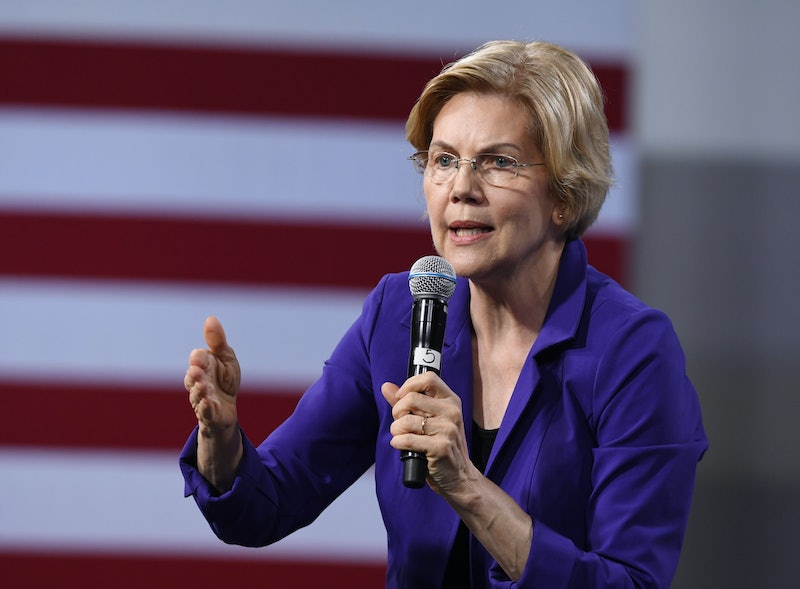 Less than two weeks after releasing a sweeping student debt cancellation plan, Massachusetts Sen. Elizabeth Warren is promoting a student debt forgiveness calculator designed to show voters exactly how much they would benefit from her plan. According to CNN, Warren showed people how to use the online calculator when she was speaking at Iowa State University on Friday.

She then asked people in the audience to take out their phones and plug their student debt amounts into the calculator, which can be found directly on her 2020 presidential campaign website. The calculator poses a short series of questions — about what type of schooling an individual took out loans for, how much student debt they accumulated, and how much their total income was the previous year. The calculator then uses that information to determine exactly how much of that individual's student debt would be canceled under Warren's plan.

The calculator is "a way to make real to people what it means to talk about student loan debt cancellation," Warren told attendees at the Iowa State University event.

Warren's student debt forgiveness plan "will cancel debt for more than 95% of people with student loan debt — and pay for it with a tax on the top 0.1% of Americans," according to Warren's campaign website. But that's not all Warren hopes to accomplish. As part of her plan to make higher education more accessible, Warren wants public two-year and four-year colleges to be free of charge for all students, regardless of their family's income. She also wants to create a minimum-$50 billion fund to service Historically Black Colleges and Universities as well as Minority-Serving Institutions, The New York Times reported.

Many Democratic presidential candidates want to make college more affordable, but a poll conducted by The Hill and HarrisX indicated that 64% of registered voters surveyed would support a plan like Warren's. Meanwhile, Vermont Sen. Bernie Sanders — who is running for president again in 2020 — made the idea of tuition-free college a central element of his 2016 platform, and he has called for legislation that would make public colleges free for all students whose families make less than $125,000 per year.

Warren has said that her student loan forgiveness plan would be funded by a tax on the wealthiest Americans. Her proposed "wealth tax," Vox reported, would impose a 2% tax on Americans whose fortunes amount to over $50 million, and 3% on those whose fortunes are worth more than $1 billion. Per Warren's plan, this money would go toward eliminating student debt, making public education more accessible, and curbing inequality across the country, according to Vox.