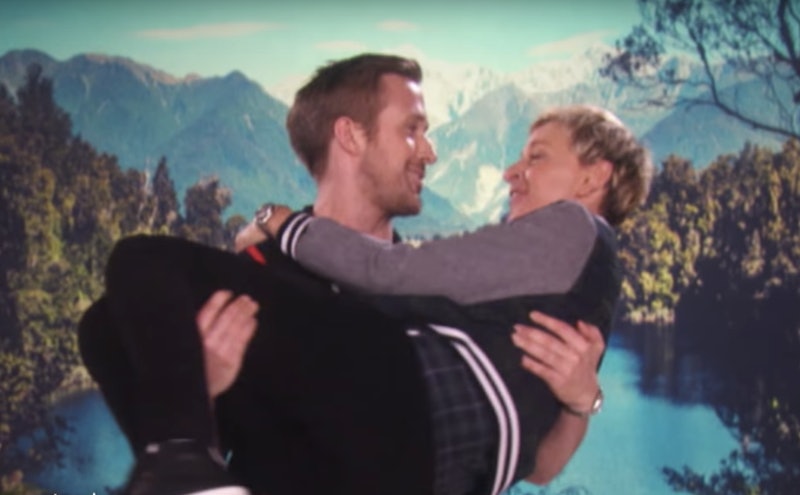 If you watched La La Land and wondered what it would be like if Ellen DeGeneres was in it, look no further. You see, DeGeneres took Emma Stone's place in La La Land and, honestly? She gives the Golden Globe winner a run for her money. As I am sure you know by now from the countless late night talk show couch anecdotes from various stars, the casting process is rarely ever seamless. Whether the role was supposed to go to another actor who turned it down, or the deliberations were up in the air until the chosen actor walked into the audition room at the very last second, it's always quite a tale. Using that cliched yet true factoid, DeGeneres used it to her advantage for a skit on her show.

The premise of the skit, as the host explains, is that she, not Stone, was "the first choice" to be cast as Mia. This point is highlighted by a slow motion montage of almost co-star, Ryan Gosling, picking her up bridal-style, with DeGeneres delivering a heartfelt and smitten smooch. This is set over the background noise of the producers lauding their abounding "on-screen chemistry." And, you know, they're not wrong. DeGeneres does look positively taken with Gosling, and vice versa. Like, I know it's a joke and all but... is it a joke when it kinda works?

Where it gets slightly more "out there" and on-brand with the host's purposefully silly shtick is when she's shown trying to be flirtatious with Gosling's character, Sebastian, in an obviously extraneously filmed scene where the actor was not actually present. And then there's the whole long, brown wig and flowing dress interpretative dance scene that's, well, amazing in the most ridiculous way. However, that still doesn't deter from the fact that Stone and Gosling's winning chemistry was nearly outdone by the talk show host.

Should Stone be worried? Well, if La La Land wasn't such an awards darling and a hit, maybe. Right now, her job seems pretty stable. But if there's another audition to act opposite Gosling? DeGeneres might just have that in the bag.

More like this
What's New On Netflix: A Third '365 Days' Movie & Lili Reinhart’s New Film
By Arya Roshanian
What’s New On Netflix: 'Never Have I Ever' & 'Indian Matchmaking' Return
By Arya Roshanian
Everything To Know About The HBO Max & Discovery+ Streaming Service Merger
By Brad Witter
Florence Pugh Won’t Discuss Harry Styles Sex Scenes In 'Don’t Worry Darling'
By Grace Wehniainen
Get Even More From Bustle — Sign Up For The Newsletter