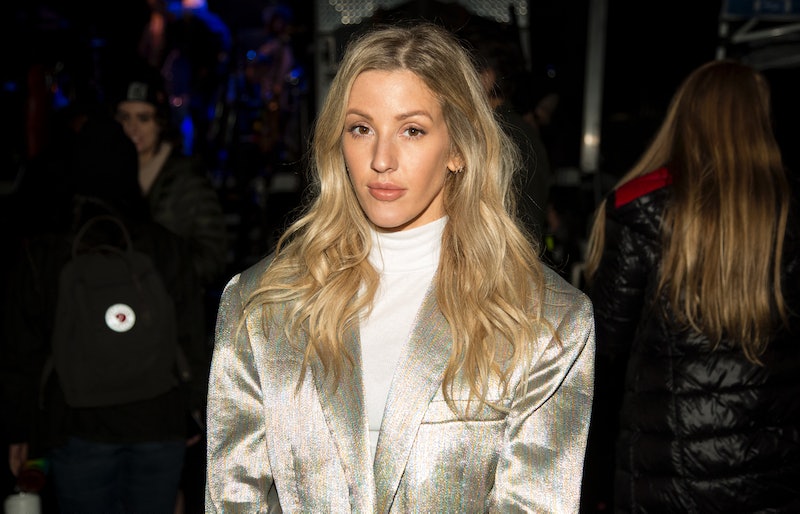 It's hard to know how you'll react if you're in or witness a road traffic incident, but hopefully grabbing your phone to film what's happening isn't your first instinct. Monday, Dec. 17 a collision on the A40 in London took over social media, and it turns out Ellie Goulding helped the two drivers after witnessing the event.

The singer explained her involvement on her Instagram story, describing how she and her driver were some of the first people on the scene. "I'm the one checking if this guy was ok," the caption reads. "[C]raziest thing I've ever seen on the road. Everyone was driving past but my driver Guy stopped. Drive safe and look out for others everyone!" A video captured by another motorist showed a Volkswagen GTi being pushed by a Royal Mail lorry along the dual carriageway. Other drivers can be heard beeping and shouting at the lorry driver to stop, who allegedly didn't realise he was pushing the car.

As The Guardian notes, Royal Mail provided a statement regarding the event. "We are very concerned about this incident," a spokesperson told the newspaper. "We sincerely hope that no one was hurt. We are investigating as a matter of urgency." The Metropolitan Police also spoke of the incident, reporting that there were no injuries or arrests, and that "officers spoke with both parties."

While it's become essential to have footage of incidents for insurance purposes (i.e. through owning a dashcam), in this instance, the filming of the accident seemed unnecessary — especially since no one was coming to the motorist's aid until Goulding and her driver were on the scene. "On a side note, I can't believe the first instinct of the other drivers who got out was to instantly start filming on their phones and shout abuse at the poor shocked driver," the singer continued in a second post, "not even checking the other driver was okay. What on earth."

Earlier this year, BBC News published a report on why people find it necessary to document crash scenes on their smartphones, which found that it has a lot to do with modern instincts. "We live in a culture where [photography on phones] is what people do; it's normative behaviour," Dr. Lasana Harris, associate professor in experimental psychology at University College London, said. "Often we're just running on autopilot and we're not thinking — and that's why it doesn't seem intrusive to those doing it."

There's also the added issue of "the so-called bystander effect", a theory where people "assume that if no-one else is acting, there's no need to." Which could explain what was happening in yesterday's incident, and why people actually started rushing over once Goulding and her driver started to help rather than just standing by.

While it may seem helpful at the time as many believe it can be a form of evidence could, actually helping those involved — if it's safe to do so — is much more important than pulling out your smartphone.

More like this
This Is When Netflix Is Going To Start Charging You For Sharing Passwords
By Darshita Goyal
Rita Ora Finally Opened Up About Marrying Taika Waititi & Their "Perfect" Wedding
By Sophie McEvoy and Catharina Cheung
This 'Emily In Paris' x Blackpink Crossover Is Beyond Iconic
By El Hunt
The Spice Girls Are Set To Reunite At King Charles III’s Coronation
By Sam Ramsden
Get The Very Best Of Bustle/UK
Sign up for Bustle UK's twice-weekly newsletter, featuring the latest must-watch TV, moving personal stories, and expert advice on the hottest viral buys.