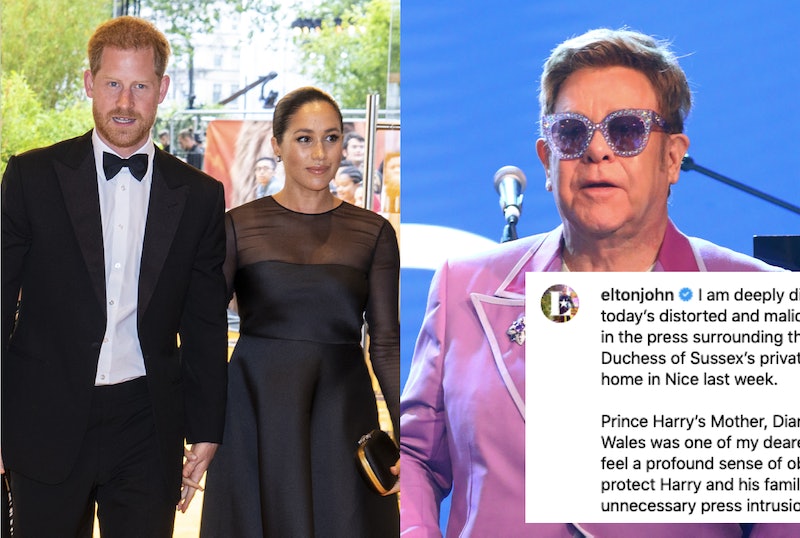 A certain singer is publicly showing support for the Duke and Duchess of Sussex. On Instagram, Elton John stood up for Meghan Markle and Prince Harry amid "relentless and untrue" attacks on their character, calling out the press for mischaracterizing the couple's recent visit to his home in Nice, France. British tabloids have attacked the royals for traveling via private jet while en route to Ibiza and Nice, criticizing Markle and Prince Harry for taking the vacation given their public commitment to fighting climate change.

On Monday, Aug. 19, John defended Markle and Prince Harry by sharing a photo of the couple on his personal account along with a lengthy, heartfelt message. The "Tiny Dancer" singer called press coverage of the trip falsified and upsetting, writing in the caption:

"I am deeply distressed by today’s distorted and malicious account in the press surrounding the Duke and Duchess of Sussex’s private stay at my home in Nice last week."

He went on to talk about his friendship with Princess Diana, and how he felt responsible for protecting Prince Harry from the invasive press coverage she faced. "Prince Harry’s Mother, Diana Princess Of Wales was one of my dearest friends," he wrote. "I feel a profound sense of obligation to protect Harry and his family from the unnecessary press intrusion that contributed to Diana’s untimely death."

In order to better manage the couple's safety and privacy, John and his husband provided their own jet for the journey. "After a hectic year continuing their hard work and dedication to charity, David and I wanted the young family to have a private holiday inside the safety and tranquility of our home," John wrote. "To maintain a high level of much-needed protection, we provided them with a private jet flight."

Markle and Harry also took careful consideration of the flight's emissions, and according to John, made significant efforts to minimize the climate impact. The caption continued:

"To support Prince Harry’s commitment to the environment, we ensured their flight was carbon neutral, by making the appropriate contribution to Carbon Footprint™."

The composer went on to applaud Markle and Prince Harry for remaining focused on their philanthropy and urged the press to leave the couple be. He wrote:

"I highly respect and applaud both Harry and Meghan’s commitment to charity and I’m calling on the press to cease these relentless and untrue assassinations on their character that are spuriously crafted on an almost daily basis."

Prince Harry and Markle's trip to the French Riviera followed a stay to Ibiza, Spain, where the couple reportedly celebrated Markle's 38th birthday, according to People. The two are expected to end their summer holiday at Balmoral Castle in Scotland to spend time with Queen Elizabeth and the rest of the royal family.

The coverage of the trip is not the first time Markle and Prince Harry have been the subject of negative tabloid stories, and John is not the first celebrity to speak out. George Clooney criticized U.K. tabloids' treatment of Markle in an interview with Good Morning Britain. "‘It seemed a little unjust, she hasn’t done anything except live her life," he said in March. "She’s a really kind, intelligent woman."

In June, Priyanka Chopra called out the British press as well, pointing out the role race has played in coverage of the Duchess of Sussex. "Of course it has to do with racism, it’s an obvious reason. But the beauty of Meg is that she’s been herself through all of this," Chopra said in an interview with the Sunday Times. "A lot of people got to know her after everything once she started dating Harry, but I knew her before and she’s the same chick."

It seems the Duke and Duchess of Sussex, who have opted to live a more private royal life, cannot escape the tabloid speculation. The good news is that they have the support of close friends, including Sir Elton John.

More like this
An 'Emily In Paris' Fave Is Joining Season 5 Of 'The Crown'
By Bustle Editors
Michelle Obama & Taylor Swift React To The Supreme Court Overturning Roe v. Wade
By K.W. Colyard
Taylor Swift's “Carolina” Theme For 'Where The Crawdads Sing' Soundtrack Is Here
By Jake Viswanath
Inside The Wild, Contrived World of Staged Paparazzi Photos
By Tess Garcia
Get Even More From Bustle — Sign Up For The Newsletter