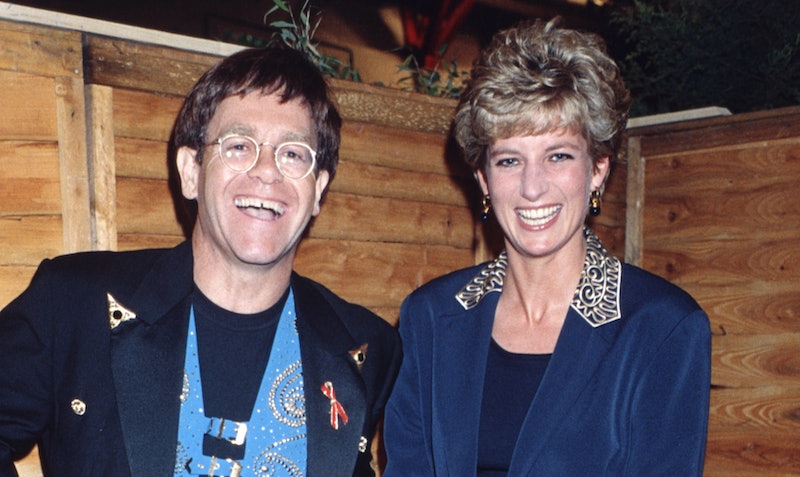 Elton John and Princess Diana famously had a very close relationship. He even penned a reworked version of Candle In Wind as a tribute to her when she tragically passed away in 1997, with all the proceeds from the track going to Diana's charities. The People's Princess and John were frequently photographed together and their friendship was strong enough to last 16 years, up until the Princess' death. Elton John's recent post about Princess Diana's passing will really pull on your heart strings. Prepare to feel seriously emosh.

It's been 22 years since Princess Diana died on Aug. 31, 1997 and during her life she touched the hearts of many all around the world. Her close friend John led the tributes to her over the weekend, taking to Instagram to upload a photo of the two of them beaming and smiling ear to ear, with the caption "miss you so much" showing just how close the two were. Ever the style icon, Diana is wearing a royal blue blazer with gold detailing. John is dressed in his signature Rocketman style, donning a black T-shirt, bedazzled blue waistcoat with a black blazer over the top.

Extra IE reports that the two first met in 1981 at Prince Andrew's birthday, where John was hired to perform, and the pair bonded over the Charleston dance. However, according to Harper's Bazaar the relationship hit a bump in the road at the start of 1997, when the the two didn't speak for months following the release of Gianni Versace and John’s coffee table book Rock and Royalty. The two then reconciled after Versace's death and in a recent interview John said of Princess Diana, "I loved her because she did so much for AIDS and she was a great friend to me. We had our fallings out, but we reconciled in the end. It was an extraordinary summer. Gianni Versace was murdered [on July 15, 1997], and then Diana rang me up and we reconciled. And six weeks later, I’m in the same house, and she’s dead. It was an extraordinary and mesmerising summer, and I just couldn’t believe what was going on."

John's tribute to Princess Diana comes just a couple of weeks after he threw his support behind the Duke and Duchess of Sussex, following criticism over their use of private planes. John posted a photo of the couple greeting a group of children to Instagram, captioned: "I am deeply distressed by today’s distorted and malicious account in the press surrounding the Duke and Duchess of Sussex’s private stay at my home in Nice last week."

He continued "Prince Harry’s Mother, Diana Princess Of Wales was one of my dearest friends. I feel a profound sense of obligation to protect Harry and his family from the unnecessary press intrusion that contributed to Diana’s untimely death." John went on to say that he had provided the private plane for the couple and paid to offset the carbon emissions the journey created. To me, this is definitely testament to just how strong John and Princess Diana's friendship was. Although John isn't Harry's official godfather, he's definitely fulfilling godfather duties here and honestly, it warms the cockles of my heart.