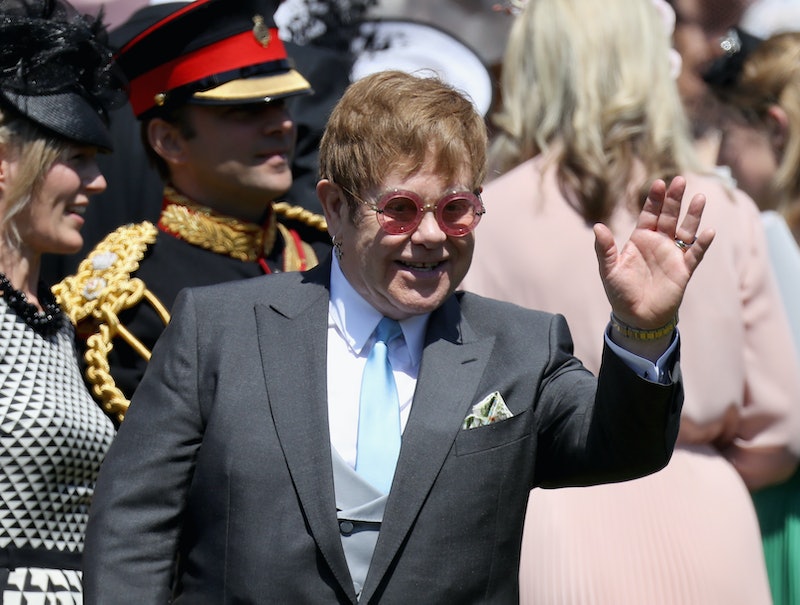 The 2018 Royal Wedding is a day-long affair, with plenty of snacks and talented cello players and celebrity guests everywhere you look. Even Sir Elton John performed at the royal wedding reception, and the rumored song list was absolutely perfect. Though there aren't videos available of the event yet, the songs Elton John reportedly played for the wedding reception span the length of his career.

Sir Elton John has performed at the Lunchtime Reception for guests celebrating the Wedding of Prince Harry and Ms. Meghan Markle.

Prince Harry asked Sir Elton to perform at the Reception which was hosted by Her Majesty The Queen at St George's Hall, Windsor Castle.

Sir Elton performed for the newly married couple in recognition of the close connection he has with Prince Harry and his family.

Per UK newspaper The Mirror, John's reception song list reportedly included "Tiny Dancer," "I'm Still Standing," "Your Song," and even "Circle of Life," from The Lion King soundtrack. (Bustle reached out to John's reps for comment on the rumored song list, but did not immediately get a response.)

The singer has maintained a friendship with Prince William and Prince Harry — now officially the Duke of Cambridge and the Duke of Sussex — since their mother passed away in 1997. Sir Elton John was close with Lady Diana, and released "Candle In The Wind 1997" in her memory. It makes sense that he'd attend the wedding as a guest of the family, but it's even sweeter than he performed a few of his classics for the wedding reception. It doesn't seem like "Can You Feel The Love Tonight" made the cut for the playlist, but perhaps that particular ballad would have been too obvious.

TMZ pointed out Sir Elton John did not perform at the 2011 Royal Wedding luncheon — English musician Ellie Goulding did. So it's heartwarming that he was able to play for this one. His reaction to a lengthy sermon during the wedding also spawned a new meme on Twitter already.

Sir Elton attended the day's nuptials with his husband, David Furnish. According to UK paper The Sun, the pair began dating in 1993. They entered into a "civil union" in 2005, and "retroactively converted it" into a legalized marriage once England allowed marriage equality. The pair officially married on December 21, 2014, on their ninth wedding anniversary. Too romantic!

Queen Elizabeth II knighted Elton John in 1998, per the BBC, so he's enjoyed the title of "Order of the British Empire" for just about 20 years. He and Furnish have two sons together, both of whom they welcomed through a surrogate per The Sun. The Sun also notes that they used the same surrogate for both children.

Lest fans were hoping to catch a glimpse of the lads all dressed up for the wedding, unfortunately, it seems as if the kids were left at home. That makes sense, though. It's a long day. And their oldest is only eight years old.

In case the news of Sir Elton John playing the 2018 Royal Wedding reception has fans thinking, "Was that his gift to the newlyweds?", rest assured that such is not the case. Kensington Royal, the official social media accounts for the British Royal Family, were specific about their objection to gifts:

The Duke and Duchess of Sussex have asked that anyone who might wish to mark the #RoyalWedding considers making a donation to charity, rather than sending a wedding gift. Take a look at the seven charities chosen by Their Royal Highnesses.

Kensington Royal then provides a link to a Twitter moment of the Duke and Duchess of Sussex's preferred charitable organizations. So modern. It seems as if the award-winning musician played a few songs at the reception simply as a favor to his beloved family friend and new spouse — and that's truly a gift in itself as well.

More like this
Britney Spears & Elton John Are Reportedly Collaborating On New Music
By Radhika Menon
Who Is Camila Cabello Dating? She's Getting Cozy With Lox Club CEO Austin Kevitch
By Radhika Menon
Kanye West Has The Most Kanye Reaction To Kim Kardashian & Pete Davidson's Split
By Jake Viswanath
Who Is Bad Bunny Dating? Gabriela Berlingeri's Vocals Are Featured On His Song "En Casita"
By Radhika Menon
Get Even More From Bustle — Sign Up For The Newsletter