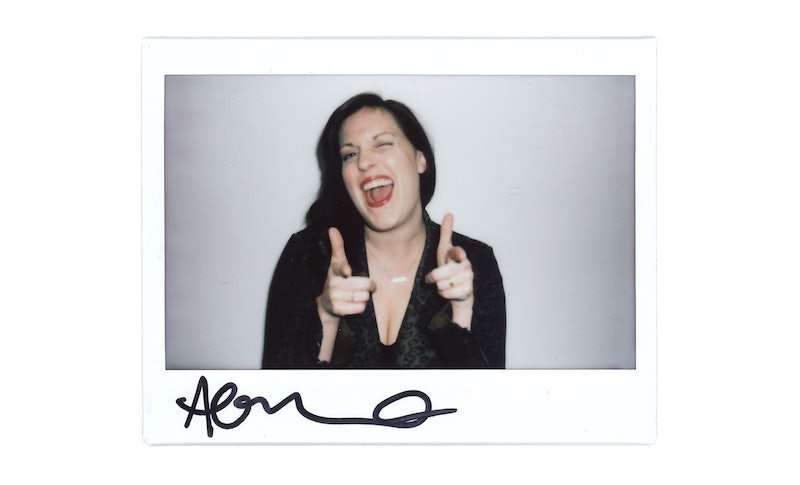 When celebrities hang out with Bustle editors, we want to give them the chance to leave their mark. Literally. So we hand them a pen, a piece of paper, a few questions, and ask them to get creative. This time, Emergence star Allison Tolman is leaving her mark in the Bustle Booth.

The lead character of Emergence, Jo, is a single mother and police chief trying to unravel the mystery of a girl who survives a fiery plane crash. She wears a uniform of jeans and T-shirts and — so far — doesn't seem too interested in dating. In other words, she's not the "sexy female" archetype we're used to seeing on television. And yet sexy is exactly how actor Allison Tolman would describe her character.

"I think Jo is the sexiest character I've ever played," she tells Bustle in our New York City offices. "She's not trying to get anybody's approval," she adds. "There's something about that confidence and her ease in herself that I think is very attractive."

In Emergence, Jo is a boss. She's in charge of an entire precinct, and she's also not afraid to take control or move forward, even when she finds out that — light spoiler alert — her new ward might actually be a robot. The role is a nice change of pace for Tolman. "I've played characters that I've loved, but they all have something to prove, and Jo has nothing to prove." It's an attitude Tolman herself has adopted, at least when it comes to certain aspects of her career.

When Tolman earned her big break playing police deputy Molly Solverson in Season 1 of Fargo, she quickly learned that being a woman in a parka on television is, well, not exactly ideal. After receiving criticisms about her weight online, the actor pushed back on Twitter. She's since reached a kind of peace with being a normal-sized woman on television. "It wasn't easy during Fargo to suddenly be thrust into the spotlight and have my image out there," she says. "It's really hard and continues to be hard. I don't know if it ever goes away or gets all the way easier."

That said, Tolman takes pride in giving women everywhere the ability to finally see their bodies represented on screen. "I have so many women who watch the show and say, 'It's such a relief and a joy to see someone who looks like me, a normal person,'" she says. "That is such a joy to get to represent something that women watching can look at and feel empowered by."

It's no wonder that, when filling out our Bustle Booth questionnaire, Tolman picked Emma Thompson — a rare relatable Hollywood icon — as one of her celeb idols. Check out the rest of her answers below.