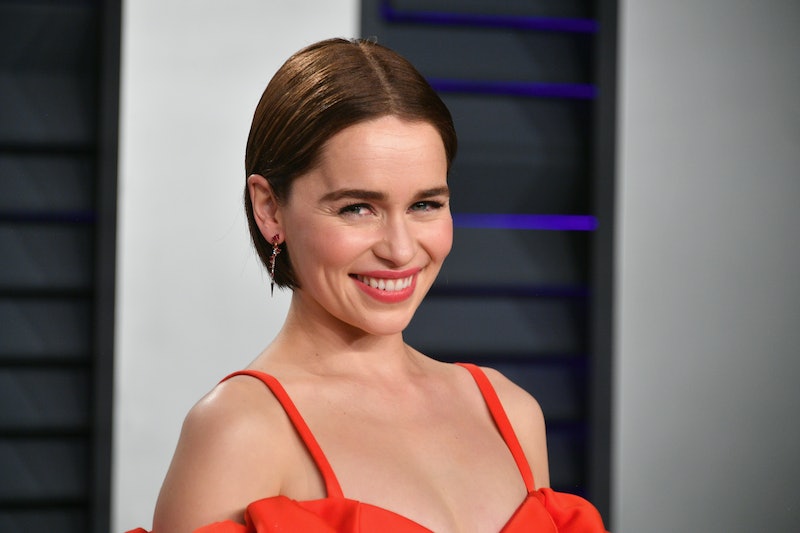 One of the biggest shows of the decade, possibly the century, is coming to a close in almost a month. HBO's Game of Thrones is its own cultural phenomenon. Completely unique and universally adored, it has fans everywhere enraptured by its fictional land of Westeros and the fight the the Iron Throne. So with the show's final season looming, Emilia Clarke talked about wrapping Game of Thrones Season 8 and what it was like to not only say goodbye to cast and crew for the last time, but also to finally be done with her legendary character, Daenerys Targaryen.

In an interview with Harper's Bazaar released on Tuesday, March 12, Clarke revealed that, while it was tough to say goodbye, it kind of felt good to wrap Game of Thrones. “I think ending it was just the mother of all releases,” she said. “It was just the metaphorical undoing of the bra, except it's like a 10-year experience.” If you're someone who wears a bra, then you can understand exactly how good that feels to just let it all go after a long day. To equate that discomfort to 10 full years of wearing a corset costume and acting in the cold, suggests that finally reaching the end of production must have truly been a magically relaxing feeling.

She also discussed what happened on her very last day of shooting as the Mother of Dragons. She said that she tried to give a little speech, something that is custom for when actors said goodbye on the show, but she didn't get too far. "I got three words in before I just completely broke down," she admitted to the magazine. "You just hold it in and you're holding it in and you're holding it in, and then I just burst into tears like a complete idiot." The actor went on, saying that people on the crew tried to bring some champagne out to celebrate, but she realized it was a depressant, so it didn't help matters much. "So it was less a celebratory champagne, it was more kind of like, 'We did it! We got to the finish line!'"

After so many years playing Daenerys Stormborn of House Targaryen, first of her name, rightful heir to the Iron Throne, etc., the actor pointed out that from the Daenerys from Season 1 and the one from Season 8 are “two incredibly different women." Makes sense, of course, as Daenerys went from a near teen being sold to Khal Drogo to give political gain to her brother to a queen and one of the leaders in the fight for the Iron Throne.

After almost a decade spent playing this character, it was difficult for Clarke to say goodbye. And after almost a decade of watching, it's definitely going to be be almost as tough for audiences to see the show go. Not being able to have that expectant feeling of waiting for another episode or another season will be disappointing, but then again, maybe, after all these years, when we finally find out who will sit on the Iron Throne, we'll feel relieved, almost like we've just taken our bras off too.