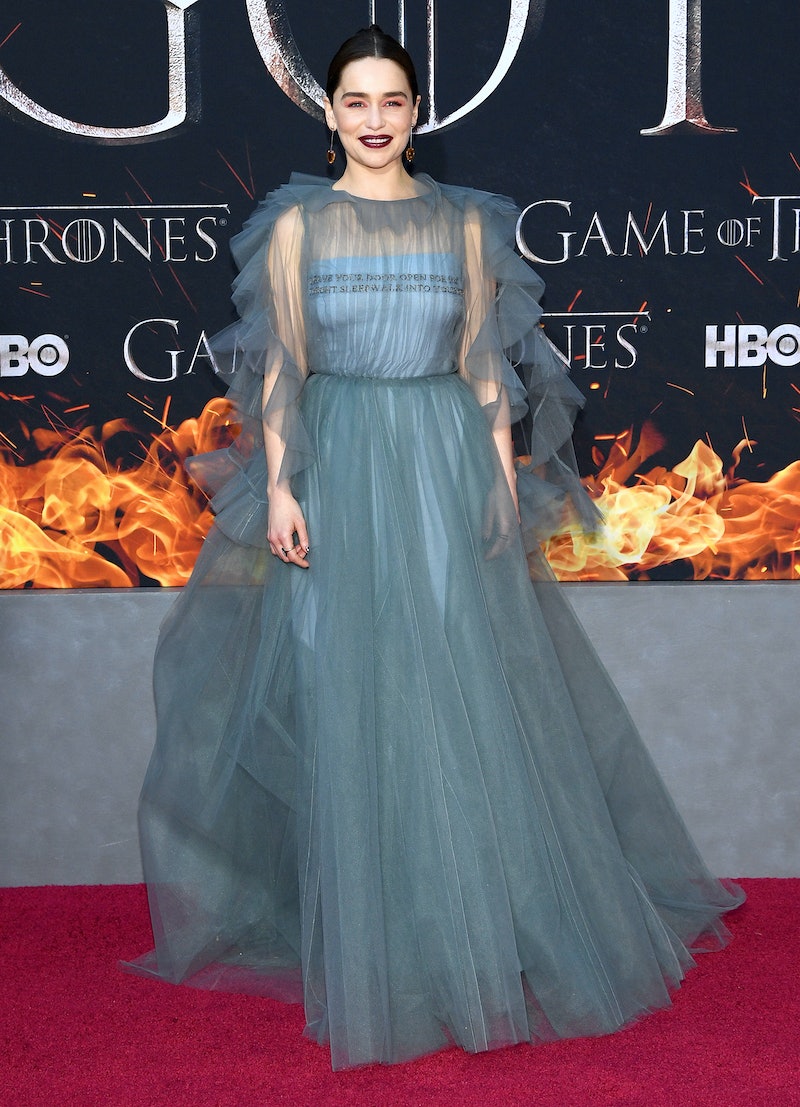 After almost a decade of working on Game of Thrones and eight seasons under her belt, Emilia Clarke has had some crazy times on the show — both as an actor and as her character Daenerys Targaryen. There's some good, some bad, and some that the actor might not want to revisit. As for Emilia Clarke’s least favorite Game of Thrones storyline, she recently revealed that it involves one sneaky character, whose intentions aren't always clear.

In an interview with Entertainment Tonight at the New York City premiere of the final season on April 3, Clarke let it known which GoT storyline she disliked the most. "There were bits of Varys' storyline [I didn't like], because I want Varys to just turn around and kill someone to their face or like, just tell everyone everything," she said. "I feel like you're on the edge of your seat waiting for him to blow up... That's it."

Varys (Conleth Hill) served as the Master of Whisperers on King Robert Baratheon's Small Council in the first season. His job in that role was to be the lead advisor on things such as intelligence and espionage. He stayed around in Westeros for a bit, keeping up with his spies and "little birds," gathering valuable information. It's very true that, as Clarke pointed out, he can be a bit passive in his manipulative ways, and his true allegiance to Daenerys isn't revealed until later seasons. Even Clarke's character is very skeptical of him, considering he seemingly was involved with trying to get her killed, too. He's so elusive that his true nature is really always in doubt, so you can't blame Clarke for wishing she could have seen a more passionate Varys, or that we could have seen more of him to understand his character.

In an interview with Insider, Hill shared that Varys doesn't create a lot of situations, he just reacts to them in a way to further his cause. "I think all the decisions that were made in recent history weren't made by him, but he was certainly there to advise on how to react to certain decisions and those big confrontations." In fact, Hill is so content with Varys' more passive approach, he said he hopes his character never sits on the Iron Throne:

As for who should sit on the Iron Throne? Clarke has an idea. "I mean, I do! Daenerys!" she told ET.

It will only be a few short weeks until fans get to see who actually ends up leader of all of Westeros and what Varys' final arc on the show will be. Perhaps he'll end up making a big power move, satisfying Clarke and stunning the audience. Or, maybe he'll stay in a more subdued role. With Varys, you really never know.