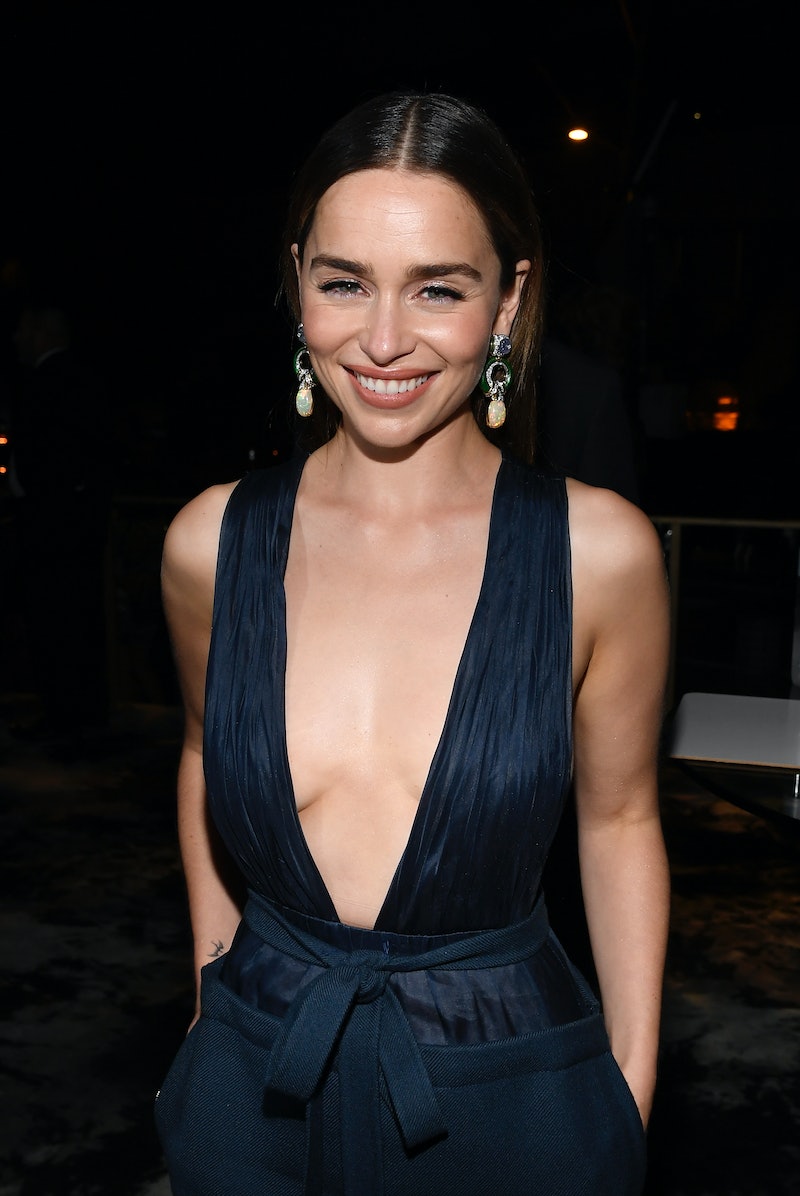 Despite her revered role as Daenerys, Mother of Dragons, Game of Thrones alum Emilia Clarke isn’t too worried about following up the success of the hit HBO series. Clarke, who starred as Daenerys Targaryen for eight seasons on the pop-culture phenomenon, recently opened up about her time on the beloved George R.R. Martin fantasy drama in an interview with Australia's Stellar Magazine published on Oct. 19. In the interview, Clarke explained why she didn’t feel any particular pressure to take on roles post-Game of Thrones.

"I don’t feel pressure to follow up the show because it’s unfollowable," Clarke told the publication. “I’m not going to go off and be like ‘Oh well, dragons are my thing…’ I can’t be a crazy woman demanding dragons forever! ‘These aren’t as good as my last dragons!’ Can you imagine?”

She also addressed the controversial ending of the eighth and final season, which saw her character take an unexpected tyrannical turn into the Mad Queen. The storyline left many longtime viewers feeling jilted. “Everyone is going to have their own opinion and they’re fully entitled to them,” Clarke said. “It’s art and it’s to be dissected and taken on in whatever individual way you wish.”

She added, “It sucks this wasn’t the perfect ending that people were hoping for, but I truly believe we would never have made everyone happy.” Despite the negative fan reaction, however, Clarke reflected on her time as the Mother of Dragons with reverence. “She taught me about lady balls," she said of her character. "She taught me what it feels like to be in a room and be heard. She wielded such power, calmness and such poise.”

"She had a fierce intensity and made some incredibly tough choices," Clarke added. "In Season 3, she had to start busting some balls, and as a 25-year-old standing in front of 500 extras, 150 crew members, six cameras, a drone, dragons and fire, I had to bring it. I felt like if I can do that, then the red carpet doesn’t feel so scary to me at all. So there’s a certain kind of self-belief that rubs off on you as a person.”

As for her first post-Game of Thrones role, Clarke will next star opposite Henry Golding and Emma Thompson in the romantic comedy Last Christmas, in theaters Nov. 8. Clarke depicts Kate, a woman who works as a department store elf recovering from a mysterious illness. In her interview, Clarke — who recently penned an essay about suffering two life-threatening aneurysms for the New Yorker in March — spoke about how Kate’s storyline paralleled her own life.

“It was uncanny reading the script because it’s my life at this point," Clarke said. “I have the benefit of having space between myself and my sickness and what you see through Kate is the fear of what happens when your body fails you in some way… I didn’t stop working so I didn’t give myself enough time to think it over.”

Last Christmas arrives in cinemas on Nov. 8. If the trailer is any inclination, it appears to be a worthy follow-up to Game of Thrones.

More like this
15 Photos Of 'The Last Of Us' Star Pedro Pascal That Cement His Zaddy Status
By Radhika Menon
At 28, Rosie Perez Risked Her Career To Stop Playing Stereotypes
By Gabrielle Bondi
Here’s Everything Coming To & Leaving Netflix In February
By Jake Viswanath
Helena Bonham Carter Doesn't Think 'The Crown' “Should Carry On"
By Sam Ramsden
Get Even More From Bustle — Sign Up For The Newsletter
From hair trends to relationship advice, our daily newsletter has everything you need to sound like a person who’s on TikTok, even if you aren’t.