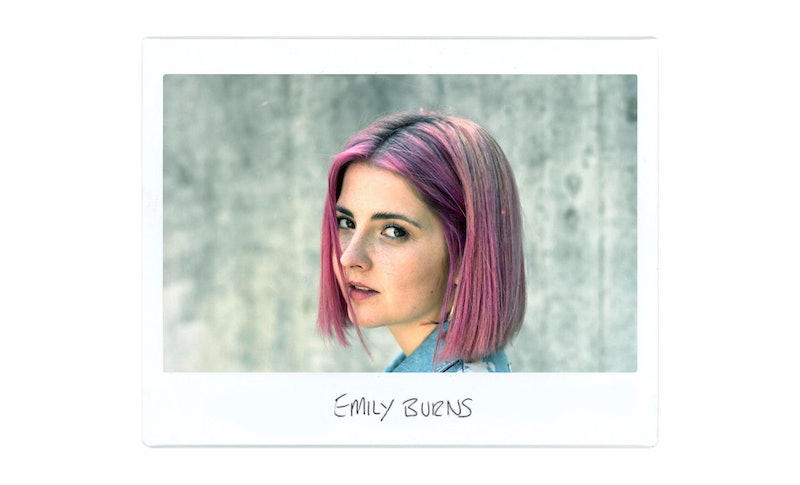 When celebrities hang out with Bustle editors, we want to give them the chance to leave their mark. Literally. So we hand them a pen, a piece of paper, a few questions, and ask them to get creative. The rest is up to them. This time, singer-songwriter Emily Burns is leaving her mark in the Bustle Booth.

If it wasn’t for her music Emily Burns says there would be one other option for her. “Crying, all the time,” she jokes, but after her monumental rise and with glowing endorsements from the likes of Noisey, Clash, and BBC Radio 1, living a life without music isn’t something she’s going to have to consider any time soon. Returning from her first headline UK and Asia tour where she sold out all four shows in China and her London show at Omeara she reflects, “I’ve always made sure to fill any spare minute I have with music.”

This summer has seen so much of what Burns has worked for come to fruition. She played at Radio 1's Big Weekend and her new EP PDA has just been released. Featuring the tracks “Too Cool” and “Damn Good Liar” alongside new releases “PDA” and “Ahead of Yourself,” it’s the ultimate feel good collection to add to your summer playlist.

Speaking about what music means to her she says, “when I was still at school, I’d spend most evenings and weekends listening to and writing music. Then when I moved to London, I worked as a receptionist at Abbey Road Studios for four and a half years which was really lucky because it meant that I was always around music.” She continues:

“I’d wake up a bit earlier than I needed to every day, just to play guitar and write some ideas. Then I couldn’t wait to get home, to pick up where I’d left off.”

Burns released her first EP Seven Scenes From The Same Summer back in 2017 and it would appear that since then she’s had a steady rise to pop stardom. However, it hasn’t all been plain sailing. “Moving to London felt like it was vital to me in terms of progressing in my career but I was really nervous about it at the time. It was frightening,” she says, “I’m really lucky that I’ve now got an amazing group of friends here and I love living in London, but it definitely took some getting used to.”

A few years into her career, Burns is reaping what she has spent her life sowing and she says, “I just feel fortunate that I’ve been in and around the music industry for so long now. It’s allowed me to learn a lot and I now feel like I’m ready to tackle whatever is thrown at me.”

With lyrics exploring serious relationship highs, painful lows, picking yourself up again, and doing your own thing, it feels like Burns is emerging at exactly the right time. Her raw, vulnerable lyrics set against colourful, playful beats make for very compelling listening. Be prepared to have "PDA" playing on a loop.

While her sound feels incredibly fresh, like any good artist Burns has some pretty awesome inspirations. “Pink, because she’s been unashamedly herself throughout her whole career,” Burns says, “Elton John because his musicianship is next to none and he still puts on a mind-blowing live show after 50 years of performing. Tove Lo because she has her own thing going on and couldn’t care less what other people think about it and it’s sick, and YEBBA because her voice and delivery is nothing short of breath-taking.”

It’s hard to imagine what the artist who has been dubbed “the new heiress of pop” will do next. Returning from her first headline tour, in the wake of the release of her new EP she says, “I’m about to release some music that I genuinely feel is the most honest and raw material I’ve ever written. I’m really excited for people to hear it and get to know a little bit more about me.” She continues:

“Because my songs are so self-reflective and personal, I feel like every time I release a track, I’m giving away a little bit more of me and I love that.”

Burns’ synth-filled, playful version of pop is so on brand for what’s going on right now in music. So if she was to collaborate with anyone right now, who would it be? “Lizzo, her energy is insane. I need that in my life.” Well, I’m praying to the music goddesses on high because I need to hear that track.

You can download PDA now and if you want to know a little bit more about Emily Burns, in her own words, she answered her Bustle Booth questionnaire.