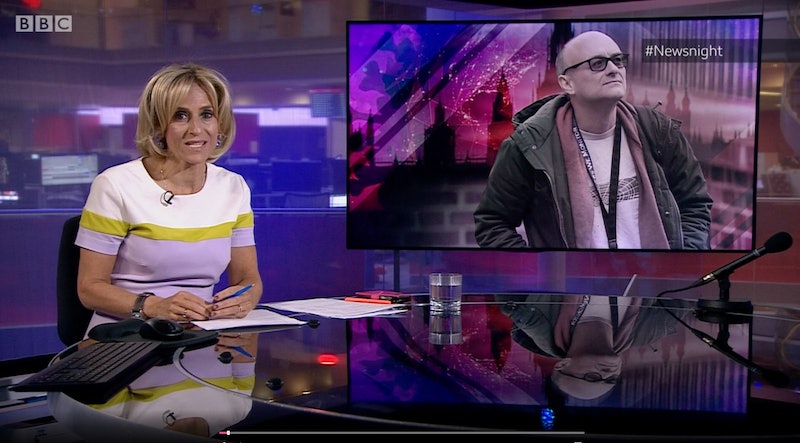 On Tuesday (May 26), reporter Emily Maitlis covered the ongoing Dominic Cummings controversy on Newsnight, which the BBC described as not meeting its "standards of due impartiality." The following day, Maitlis was absent from her post, replaced by Newsnight's UK editor Katie Razzall, leading to speculation that she may have been taken off air for her comments. However, Maitlis has now cleared things up with a tweet saying she "asked for the night off."

"So grateful to my friend and excellent colleague @katierazz for stepping in this evening," Maitilis posted on Thursday (May 28). "She did so because I asked for the night off — knowing tonight's prog would be in the most excellent hands 🤚 #newsnight". Razzall also tweeted that she wouldn't have "agreed to present the show" if this wasn't the case.

Stewart McLean, Newsnight's deputy editor, clarified things further: "For the avoidance of doubt, @maitlis has neither 'been replaced' nor 'taken off air' for this evening's Newsnight," he tweeted.

Maitlis speech gained a lot of traction on social media, bringing in millions of views, which, as the Guardian points out, is "many more than tune into Newsnight on a typical evening." In it, she stated that Cummings had broken lockdown rules, saying that he "made those who struggled to keep to the rules feel like fools and has allowed many more to assume they can now flout them."

Maitlis continued: "The Prime Minister knows all this but despite the resignation of one minister, growing unease from his backbenchers, the dramatic early warning from the polls, and a deep national disquiet, Boris Johnson has chosen to ignore it."

Following complaints from Conservative politicians and "journalists in and outside the public broadcaster," per the Guardian, the BBC issued a statement: "We've reviewed the entirety of last night's Newsnight, including the opening section, and while we believe the programme contained fair, responsible and rigorous journalism, we feel that we should have done more to make clear the introduction was a summary of questions we would examine, with all the accompanying evidence, in the rest of the programme.

"As it was, we believe the introduction we broadcast did not meet our standards of due impartiality. Our staff have been reminded of the guidelines."

More like this
This Is When Netflix Is Going To Start Charging You For Sharing Passwords
By Darshita Goyal
Rita Ora Finally Opened Up About Marrying Taika Waititi & Their "Perfect" Wedding
By Sophie McEvoy and Catharina Cheung
Michaela Coel Has Some *Thoughts* About The Nepo Baby Discourse
By Maxine Harrison
Twitter Is Burning As Phoebe Dynevor Reveals Daphne’s 'Bridgerton' Exit
By Sophie McEvoy
Get The Very Best Of Bustle/UK
Sign up for Bustle UK's twice-weekly newsletter, featuring the latest must-watch TV, moving personal stories, and expert advice on the hottest viral buys.