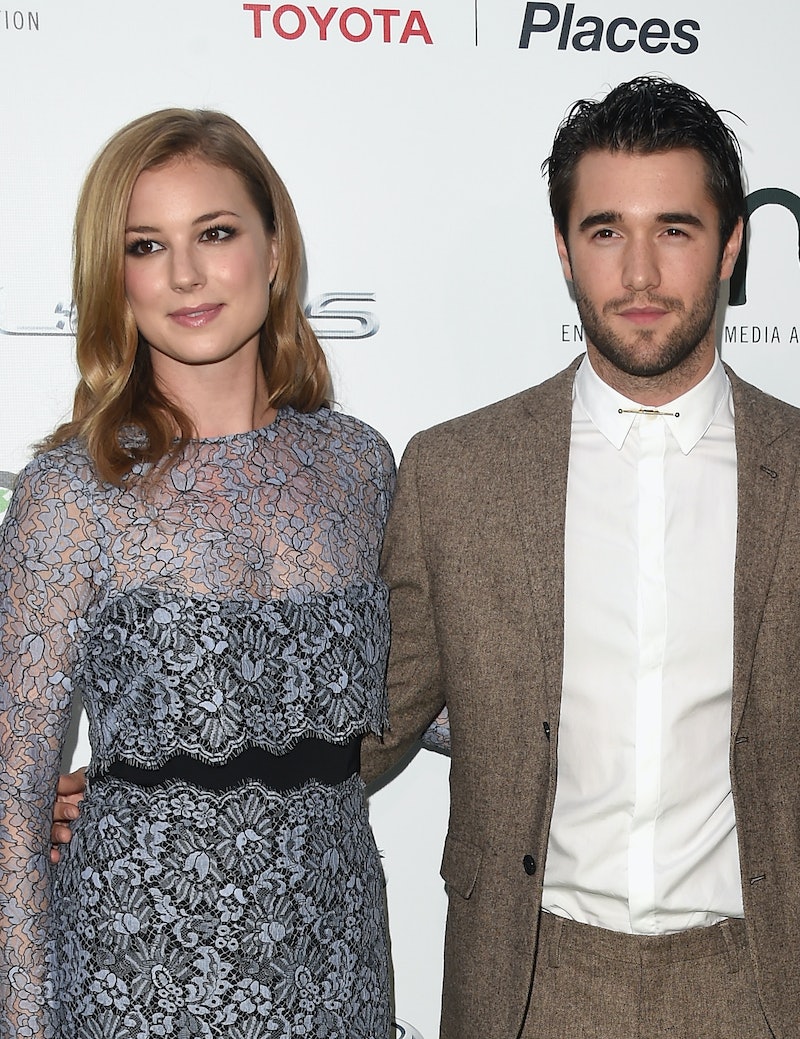 These costars are continuing the romance off-screen — but hopefully without all the drama. According to E! News, Emily VanCamp and Josh Bowman of Revenge are married, and it's no surprise this longtime couple decided to tie the knot. VanCamp and Bowman played Emily Thorne and Daniel Grayson on the ABC drama from 2011 to 2015. The couple not only worked together on the series, but their characters were married until Bowman's character died in Season 4. Fortunately, their real-life romance has contained less lies, deceit, and well, revenge.

VanCamp and Bowman were married in the Bahamas, according to Us Weekly. She announced the wedding to fans on Instagram, sharing several pictures from the big day, writing,

"Thank you to all of our friends and family who made their way to celebrate with us! We are eternally grateful. And to Lela Rose and your incredible team for creating my dream dress... Thank you times a million."

VanCamp also posted a photo from the celebration, captioning it with the date of the wedding, "12.15.18" and a heart emoji.

She and Bowman have been together for more than seven years, as reported by E! News. The couple announced the engagement in May 2017 on Instagram as well. VanCamp showed off the engagement ring in a photo, and captioned it with a simple heart emoji. According to People, VanCamp was thrilled about the proposal. “It’s literally only been a couple of days, but it’s amazing,” she said at the time. “I’m really happy."

Social media updates and occasional comment aside, the couple has kept their connection largely private. In 2014, VanCamp told InStyle they have a strong relationship, and the interview is one of the few times she discussed it publicly. "I have a wonderful love in my life," she said. "Trust is the most important thing in any relationship, because everything falls into place after that."

In January, VanCamp hinted the wedding would be on the horizon, according to E! News. The star was asked how planning was going, and she mentioned that conflicting schedules were putting the nuptials on hold. "We haven't had any time," she said. "We've been working in different countries. We're just taking our time with it." However, when asked if the wedding would take place in 2018, she said, "Maybe."

Browan and Vancamp reiterated that work made wedding plans difficult at the 2018 Television Critics Association press tour, according to People. “We’re not in a rush and we’re not in the wedding planning zone," VanCamp told the publication. "I think once we start it’ll go quickly, hopefully, but we’re both very focused on our work, so the little time we have together, we just want to be together.”

In addition to any professional developments, the next few years could be eventful in their personal lives as well. Back in 2014, VanCamp talked to Elle Canada about having kids. "How excited I am to have children," she said. "It never seemed tangible, but my sister just had a baby—beautiful little Ivy—and my sister Alison is having a baby boy. Suddenly, it's like that part of my life is real."

It seems like Vancamp and Browan's relationship is the exact opposite of their characters on-screen romance in Revenge. These two have been together for a long time, and finally found time to tie the knot. Even though they've kept their off-screen relationship fairly private, it's clear they are so happy together.