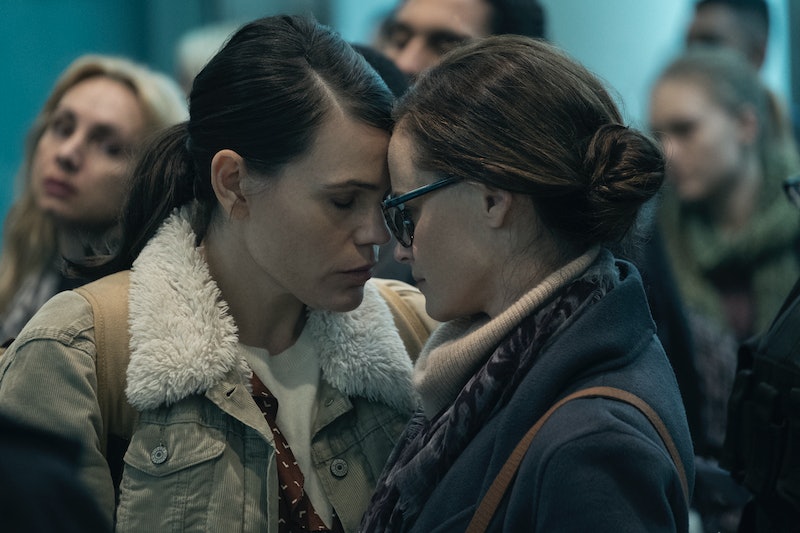 It takes a while for Emily to feel emotionally ready to reach out and find Sylvia. That's understandable, given all that she's been through. We've seen what it's like for characters to transition from Gilead to Little America before on The Handmaid's Tale. Moira made it out, as well as Luke and Erin — who was mute until just recently. When Moira escaped, she was taken to a refugee center and given so much paperwork that it was relieving and disorienting all at once.

Emily's story is a little different, and powerful in different ways. For one thing, we see more of the process: like the border patrol officer who Emily thought was a threat, but instead gives her a blanket and the opportunity to declare asylum in Canada if she would be persecuted as a woman were she to return to her country. Alexis Bledel's delivery of the word "yes" in response to that question alone probably earned her another Emmy.

She and June's baby are taken to a hospital, where they are applauded by onlookers. When Emily asks a staff member if she can keep baby Nicole with her, the answer is "of course." It says a lot that the simplicity of phrases like "yes" and "of course" are all that The Handmaid's Tale needs to make a powerful statement about the refugee process. It really can be that easy.

The series doesn't have to be over the top to highlight how different the refugee process is in many nations today, including our own. Emily is not a burden for Canada, or a problem. She is welcome, accepted, and cared for immediately.

Her doctor even tells her to watch her cholesterol. It's mildly annoying when doctors do that to us in the real world, but a strange kind of luxury for Emily. She's safe now, so safe that doctors can tell you to stop eating fried foods without it being a threat.

The fact that Emily is scared to call Sylvia and face her old life affects Luke. Moira thinks he's worried June won't find him if she ever escapes. However, what The Handmaid's Tale does so well is show that everyone's experience is different. Luke, a refugee himself, is now living with three former handmaids who have some shared experiences but disparate paths and individual ways of coping.

When Emily does call and Sylvia literally stops traffic, it's all the more emotional. We still don't know what Sylvia and their son's lives are like in Canada. She may be remarried. "I've seen a lot of release reunions and they're not always storybook endings," says Moira to Emily in Episode 2. "But nobody's talking about happily ever after, just after." No matter how Emily and Sylvia's reunion goes, their "after" has begun, and that's what's important.