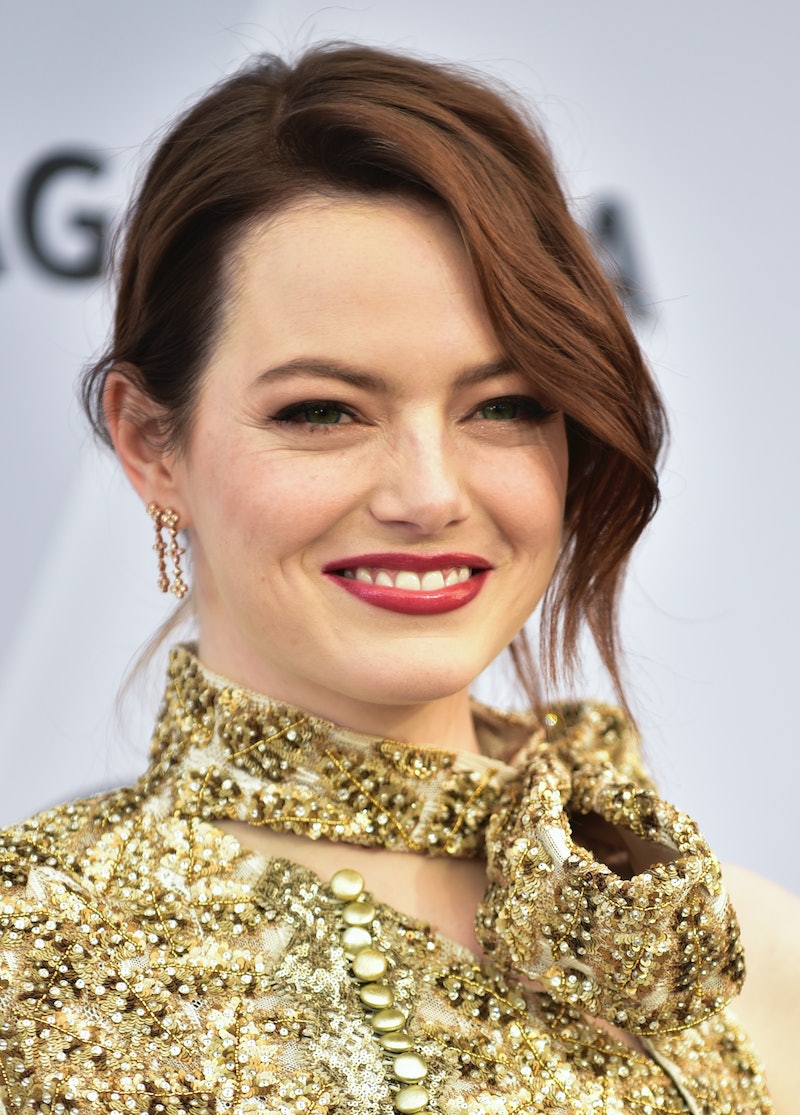 In case anyone needed more evidence that the 2019 SAG Awards were a special occasion, Emma Stone and boyfriend Dave McCary's appearance at the event was pretty rare, as pointed out by E! News. Stone reportedly walked the red carpet alone, but McCary was seated at her side to support her for the rest of the evening. The couple don't often step out together, but it seems like Stone's multiple award nominations provided an exception.

The actor received an Outstanding Performance in a TV Movie or Limited Series nomination for Maniac, as well as an Outstanding Performance in a Supporting Role for The Favourite, as reported by E! News. Even though she didn't ultimately take home any trophies, Stone and McCary could be seen smiling and chatting at their table throughout the night.

McCary and Stone were first linked at the premiere of Brigsby Bear, a film McCary directed, in July 2017, according to Elle. However, the first legitimate report that Stone and McCary were dating quietly surfaced months later in October 2017, according to People. It's not clear when exactly the couple first got together, but they met when Stone hosted SNL in December of 2016, according to People. McCary is a segment director on the show, and he directed Stone in the "Wells For Boys" sketch.

There have been several other times Stone and McCary have been spotted out, though they were not photographed. In December, Stone reportedly got cozy with McCary during a private holiday party she hosted at a roller rink, according to Us Weekly. The publication also reported that the couple attended a Golden Globes afterparty, along with Taylor Swift, Joe Alwyn, Rachel Weisz, and Daniel Craig.

It's possible that McCary and Stone will be more public about their relationship in the future, as the SAG Awards is the couple's second public appearance this month. On Jan. 20, Stone and McCary had a date night at the Staples Center in Los Angeles to watch the LA Clippers play the Golden State Warriors, according to Elle. The couple looked super happy together, and they were photographed laughing and smiling throughout the evening.

Stone star has historically been private about her romantic life. In the past, Stone dated actor Andrew Garfield, with whom she split in 2015 after four years of dating, as reported by E! News. During their time together, she was open about her decision not to discuss the relationship. In 2015, The Favourite star addressed the private romance during an interview with the Wall Street Journal. "I understand the interest in it completely because I've had it, too," she told the magazine. "But it's so special to me that it never feels good to talk about, so I just continually don't talk about it."

It seems that Stone intends to keep her current relationship private as well, since she hasn't spoken publicly about McCary. Neither star is on social media, adding an extra layer of privacy to their relationship. Still, the couple's recent appearances at the LA Clippers game and the SAG Awards could hint that they will be attending more events together in the future.