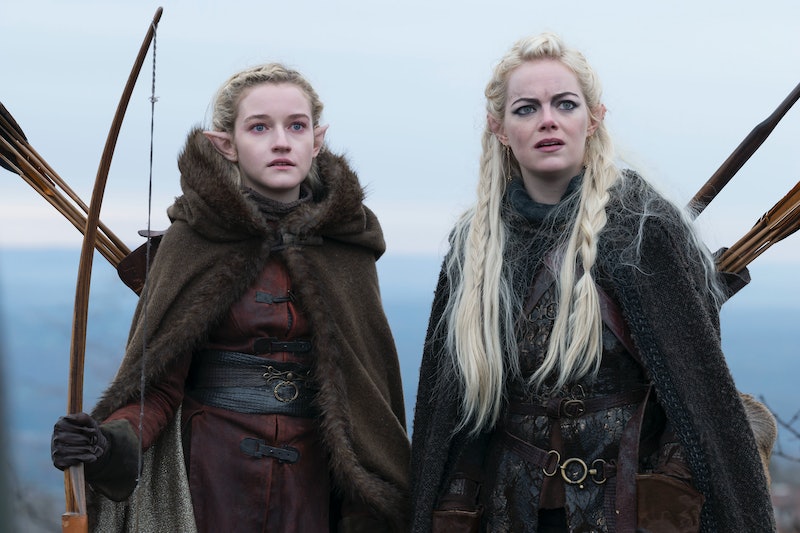 Spoilers ahead for all of Maniac. In Maniac Episode 7, Annie (Emma Stone) finds herself dressed like Legolas from The Lord of the Rings, much to her chagrin. This would be a strange scene for the uninitiated, but audiences have already watched Annie transform into a lemur-stealing hospice nurse in 1980s Long Island and a 1940s thief in previous episodes, which chronicle the drug-induced hallucinations of patients in a pharmaceutical drug trial. This time, Annie is a half-elf named Annia, while her late sister, Ellie (Julia Garner), has transformed into an elf named Princess Ellia. But Annie suddenly becomes lucid during the hallucination, and she's particularly angry about this dreamscape. "It's f*cking fantasy! It's my least favorite genre!" she exclaims. And she wasn't the only one who to be annoyed by the LOTR homage — Emma Stone hated playing an elf on Maniac just as much as Annie hated being one.

"When they gave me the script for the elf episode, I was like, 'No, no, no,'" Stone tells Bustle. "'Here's the one thing that I don't ever really need to go into.' And they were like, 'Well, that's how we're going to tell the story!' And I was like, 'No, no, no. Guys, is there anything we can do that would be different?'" While she ultimately still had to don some elf-ear prosthetics and get into character, Stone concedes that Annia was still fun to play. "[The writers] did do this great sort of Han Solo thing, where she hates being an elf," she explains.

And the La La Land actor wasn't the only one who was hesitant to fully commit to this particular fantasy. Garner tells Bustle that the Maniac script often changed last minute, and aspects of this storyline were part of those changes. "At first, [my role] was an elf," she recalls. "And then they were like, 'Do you do a British accent?' It was like, two days before, I was getting tested for prosthetics on my ear, and I'm like, 'Uh, no?'"

After determining that her first stab at an English accent was "too posh," director Cary Fukunaga instructed Garner to go home and watch Lord of the Rings to study the elven diction, which she did. Garner then slips into the high-pitched elf voice that audiences hear on the show when she says, "But I noticed that what really worked was, it almost sounded child-like."

The end result works perfectly for Princess Ellia, who is the sweet and innocent foil to Annia's drunk, grumpy ranger. Their mission, by the way, is to find the Lake of the Clouds, which is supposed to heal the dying Ellia. But since this dreamscape reflects what's happened in their realities, the two elves' quest is similar to the sisters' road trip, which results in Ellie's death.

Furthermore, Annie's elven cosplay reveals a deeper truth about herself. Stone describes Annia as the self-loathing part of Annie's personality, saying, "she has that sort of self-sabotaging behavior of cutting her own ears off." Indeed, although she's just a half-elf, she apparently doesn't want to be identified as one, which is why she cut off the pointy, elven part of her ears. Audiences see her real-world counterpart do similar things, like abusing drugs, getting drunk, and refusing to move on after Ellie's death. However, Pill C reveals that she can't keep running in place. "You have to look," Ellia/Ellie tells her guide/sister once they reach the Lake of the Clouds, which is really where they crashed. "This is how you move on."

And while the car wreck was incredibly traumatic for Annie, Garner said that she and Stone couldn't stop laughing while they filmed it. "They lifted [the car] up in the air, we had to go up a ladder, go in the car, and then it would spin," the Ozark actor says, then imitating the whirring, spinning car. "We were laughing because we were just like, 'This is weird,'" she says. "It was like a roller coaster."

The sisterly rapport that viewers see onscreen was just as present off, as Garner explains. "We had a really good time," the Ozark actor says of her and Stone. "And we definitely would be like, walking around in the elf costume, and we're like, 'This is our job!' Like, 'This is a Monday, we're on the edge of a cliff, and we're walking around in elf gear! It's totally fine!'" It seems like filming that elf storyline wasn't so bad after all.

More like this
Netflix Reveals First Look At Wednesday In The 'Addams Family' Spinoff Series
By Bustle Editors
What’s New On Netflix: Ana De Armas’ 'Blonde' & A Nick Kroll Special
By Arya Roshanian
Here’s Everything Coming To & Leaving Netflix In October
By Jake Viswanath
What’s New On Netflix: Meet 'The Real Bling Ring'
By Arya Roshanian
Get Even More From Bustle — Sign Up For The Newsletter