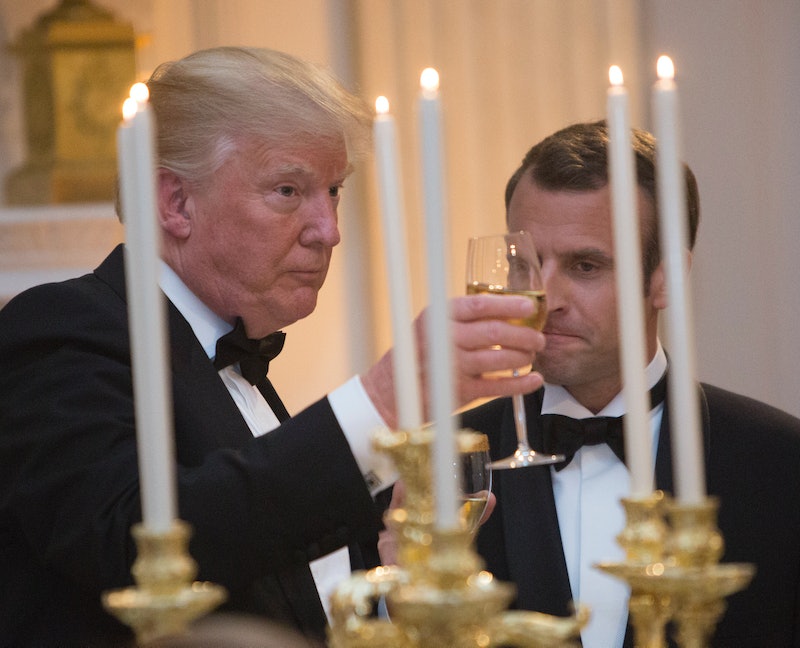 Imitation may be the highest form of flattery, but using imitation to play high-stakes trade war games might transcend all adulation. According to an Axios report, the president of France Emmanuel Macron used The Art Of The Deal against Trump and employed the book's negotiating tactics while the two were at the North Atlantic Treaty Organization (NATO) summit in Brussels.

Trump supposedly told the French president that he should persuade the European Union to negotiate with the United States, according to an unnamed source with Axios. Macron had apparently said no, that "he was not in favor of negotiating under threat."

"I read The Art of the Deal," Macron apparently responded to Trump, Axios reported. "I know that we need to retaliate first so we have some leverage in the negotiation."

Trump and Macron's relationship counts as one of the tamer relationships on the world stage, though the two have had tension in the past. Trump has reportedly told Macron that France should leave the EU, according to The Hill.

Trump, by all accounts, is an atypical president with a leadership style that many have been trying to understand since the start of his campaign. According to Axios, the French president's rhetoric is strategic and similar to other world leaders who have learned to communicate with Trump using the "transactional language of dealmaking" and "blunt projection of strength." Leaders who apparently understand Trump's responsiveness to this hard line approach include North Korean leader Kim Jong Un, The Hill reported. It's why Trump expresses admiration for iron-fisted rulers and why, Axios explained, Trump denigrates leaders he views as "weak," like Canadian Prime Minister Justin Trudeau.

The Art of the Deal was published in 1987, with Trump and journalist Tony Schwartz listed as co-authors. The book focused on how to succeed in business with Trump's life story as a backdrop. But while the two worked together to produce the first book under Trump's name (and, arguably, the one that made him a household name), Schwartz has made his opinion of Trump no secret. Since Trump's entry into politics, Schwartz has publicly berated his former subject, saying he is "incapable of reading a book, much less writing one" according to the Huffington Post. Decades after the book came out, Schwartz claimed that he wrote all of the book and has since expressed remorse for his role in Trump's rise to the presidency. Trump denies the claims that Schwartz wrote the entire book and insists they worked together to finish it.

Perhaps it's not a surprise that Macron read the book; after all, Macron and Trump's relationship seem to be friendly, with Macron making Trump the guest of honor at France's Bastille Day national celebration last year, during a "time when other European leaders were still recoiling from the shock of Trump's 'America First' revolution," according to CNN.

The European Union is currently considering the best course of action on the tariff escalation, though a European Council representative to the G20 has said that the White House's removal of tariffs on steel and aluminum imports is not a necessary precondition if trade talks between the United States and the European Union are to start.

Representative Hubert Fuchs' comments butted heads with the French finance minister's sideline remarks, according to Reuters, that the United States must withdraw the tariffs before trade discussions can begin.

“We are representing 28 member states of the European Union, not only Germany and France. We shouldn’t have any preconditions for the talks,” said Fuchs, who is also Austria’s state secretary for finance. “It’s not a precondition because preconditions are never good, but it would be a great wish.”

Cars are also on the negotiation table, should the European Union and the United States sit down for tariff talks. Trump had threatened to dump 20 percent duties on all car imports from Europe, leading to reciprocal retaliatory tariff threats from the EU in return.