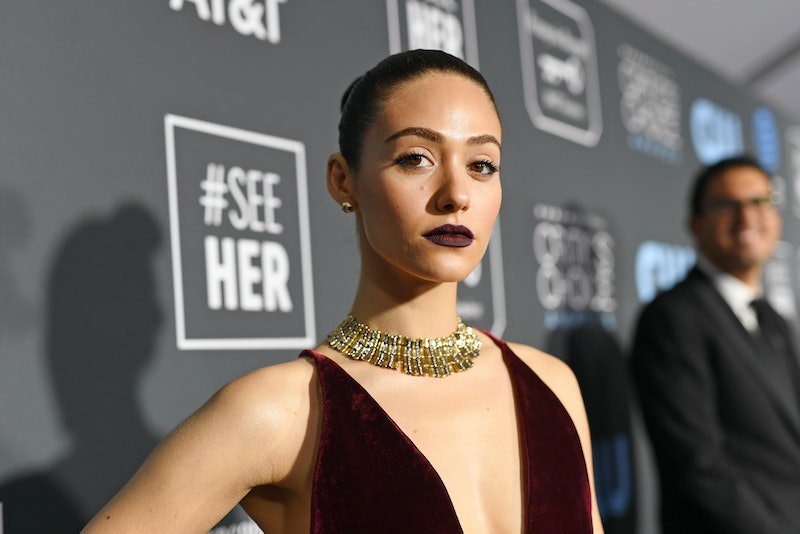 It's been a long road for Emmy Rossum and her character Fiona Gallagher on Shameless. The show started back in January of 2011, and after 9 seasons, the time has come for Rossum to say goodbye. Emmy Rossum’s Shameless farewell was bittersweet for the actor and fans alike, as proven through her goodbye posts to social media. Rossum announced that she would be leaving the show in August, and now it's time to say goodbye to Fiona for good.

On March 10, the Season 9 finale of Shameless, "Found," aired, and with it came Fiona's goodbye. Hours ahead of the finale, Rossum took to social media and shared a loving message about the end of her time as Fiona Gallagher. She shared a photo of Fiona from the pilot to Instagram, writing,

"Final episode tonight. Here is a picture taken eight years ago during our pilot. Today, 110 episodes later, I am filled with gratitude for my shameless family and for our faithful audience. I’ll be watching with love and can’t wait to see what comes next. ❤️"

Fans who watched Sunday's episode will recognize Fiona's outfit, specifically her blue jacket, in the photo. In her last episode, Rossum appeared to recreate her look from the pilot, something she confirmed on Twitter, calling it an "easter egg." It's almost poetic: the outfit she wore in the pilot, back when she was lost, young, and struggling to provide for her family is a complete 180 from her look in her final episode. The Fiona seen in the Season 9 finale was confident, triumphant, and hopeful. She might look the same, but all these years later, she's a totally different person.

In an interview with Entertainment Weekly, the show's creator John Wells gave insight into why Fiona's journey ended — spoiler alert — with her walking alway from her siblings and from Chicago. "Fiona was their mother. She’s their older sister, but she raised these kids," he said. He continued:

"And we wanted her to go through that experience, like all parents do, when you look around and realize, 'Wait a second, I might be mostly done. The kids have grown up and other people can pick up the ball and the responsibility and it doesn’t all have to be me, and maybe it’s time as I’m almost 30 years old to consider what I want from my life — is it my time now?' And she’s young enough, because she started having to do it when she was a teenager, that she can make that choice. So that interested me and the writing staff."

Fiona's destination is currently unknown, but Wells teased that fans will find out where she went in Season 10. So, there will be updates about her character. That said, fans shouldn't expect Rossum to return to the show anytime soon. In an interview with EW, the actor said that, for now, Fiona won't be coming back to Shameless. "I would never close my door on the family. Like I said in what I wrote and what I said to them repeatedly, they should just think of me being down the block," she said. "I’m just in New York. It’s not like I’ll never be in L.A. or Chicago ever again, so I’m not that far away. But for me, quite honestly, I’m not sure what more story can be told for her. I really liked the way we ended it."

That said, Rossum isn't closing the door on a possible return. "But never say never; I really love all the people I work with," she added. "There’s so many other things that I want to do but I love my family."

In the Season 9 finale, Fiona recieved a fitting exit for one of the most loved characters on Shameless. The show without Rossum will take some getting used to, but it definitely will go on — hopefully long enough for her to make a comeback appearance.