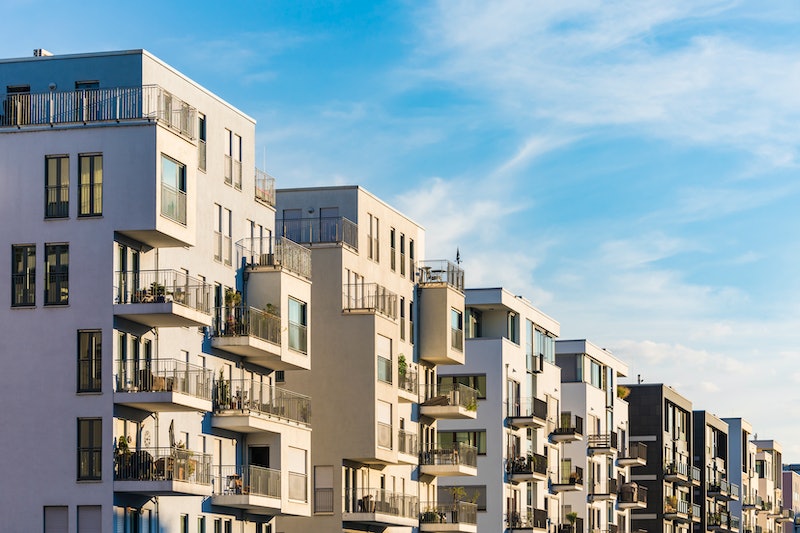 Housing discrimination happens all over the country on the basis of everything from race, to immigration status, to sexual orientation. In October, the House of Representatives Financial Services Committee heard testimony from an LGBTQ rights activist that highlighted the unique challenges LGBTQ people face when looking for a place to live. Now, advocates are calling upon members of Congress to create laws that address those unique forms of discrimination that LGBTQ people face from both lenders and landlords.

“LGBTQ people are some of the most vulnerable when it comes to affordable housing,” Rep. Ilhan Omar says in an email to Bustle. “LGBTQ youth are 120% more likely to experience homelessness than everyone else. The LGBTQ community also faces discrimination when purchasing or renting a home, and there is no federal law against it.”

In November, members of the house introduced two bills aimed at ending the affordable housing crisis. Rep. Alexandria Ocasio-Cortez’s bill, the Green New Deal for Public Housing Act, which she introduced alongside Sen. Bernie Sanders, focuses on creating more environmentally friendly housing. Omar’s Homes for All Act focuses more on increasing the number of public housing options across the country.

Omar’s bill explicitly prohibits federally funded public housing facilities from refusing to rent to tenants based on their sexual orientation or gender, which isn’t something that has yet been codified into federal law. It follows the introduction of the Equality Act back in March, which goes beyond housing to codify a total ban on LGBTQ discrimination. The act, which was cosponsored by Omar, is a civil rights bill seeking to make it broadly illegal to discriminate anywhere in the United States on the basis of sexual orientation, sex, or gender identity. The Equality Act also seeks to amend the Fair Housing Act to specifically prohibit this kind of discrimination. After being passed in the House, the bill landed in the Senate in May, where it hasn’t yet made progress.

Though the Federal Fair Housing Act, passed in 2012, protects against gender discrimination, it doesn’t specifically protect against all kinds of LGBTQ discrimination, like getting turned down for a loan or rental for being in a same-gender couple or for being transgender. According to Harper Jean Tobin, director of policy at the National Center for Transgender Equality, that lack of explicit federal protection is partly why discrimination against LGBTQ people in housing continues.

Tobin says that for trans people specifically, rates of unemployment, poverty, and homelessness are higher than they are for the general population. Those risk factors, paired with discrimination from banks issuing loans and landlords seeking tenants, mean that trans people face major roadblocks when looking for a place to live. According to the National Center for Trans Equality, one in five trans people have been refused housing on the basis of gender identity.

“People still get denied housing or evicted simply because they're transgender in this country,” Tobin says.

Under the Trump administration, Tobin says policy rollbacks have only made these roadblocks more common. “They're moving away from an emphasis on housing … to an emphasis on deregulation,” Tobin says, “and ideas like rounding up homeless people off the streets that have been proven not to work.”

Tobin isn’t the only LGBTQ advocate to call out Trump’s administration for its impacts on the community. The Human Rights Campaign (HRC), one of the largest LGTBQ advocacy organizations in the country, has been monitoring what they see as attacks on the LGBTQ community by White House in a project called “Trump’s Timeline of Hate.” The timeline refers to Trump’s secretary of housing and urban development, Ben Carson, as an “anti-LGBTQ proponent.” According to The Washington Post, Carson has a history of allegedly making “dismissive” remarks toward the transgender community that included claiming trans people are “abnormal,” and implying that transgender women were trying to infiltrate women’s shelters. That’s why organizations like HRC and the National Center for Transgender Equality are pushing for broader, federal-level protections.

“We need national action,” Tobin says. “We need action from Congress and voters to stop what the Trump administration is doing.”

Omar also recognizes that more direct federal legislation will need to be passed to fully address the problem of LGBTQ discrimination in the housing market, even beyond her own bill. “Ensuring that Americans have a stable home isn’t just an economic issue — it’s a civil rights issue,” the congresswoman says. “It’s why the House passed the Equality Act — which would prohibit discrimination on the basis of sexual orientation and gender identity in housing, employment, and elsewhere.”

Though the Senate hasn’t yet passed the Equality Act, and the Homes for All Act will be voted on in the coming months, activists like Tobin are hopeful that both bills will help make LGBTQ discrimination a thing of the past. For Tobin, federal reform that treats this kind of discrimination as a civil rights issue is key.

“We’ll need Congress to pass the Equality Act to make clear and explicit those protections across the country, including in fair housing,” she says. “These are systemic national issues. They require national solutions.”

More like this
What The UK Blocking Scotland’s Gender Recognition Bill Means
By Sam Ramsden
The UK Government Is *Finally* Banning Conversion Therapy
By Sophie McEvoy
Gen Z Are Twice As Likely To Identify As Queer, According To New Data
By Sam Ramsden
8 Charities To Donate To During Black History Month
By Alexis Morillo
Get Even More From Bustle — Sign Up For The Newsletter
From hair trends to relationship advice, our daily newsletter has everything you need to sound like a person who’s on TikTok, even if you aren’t.