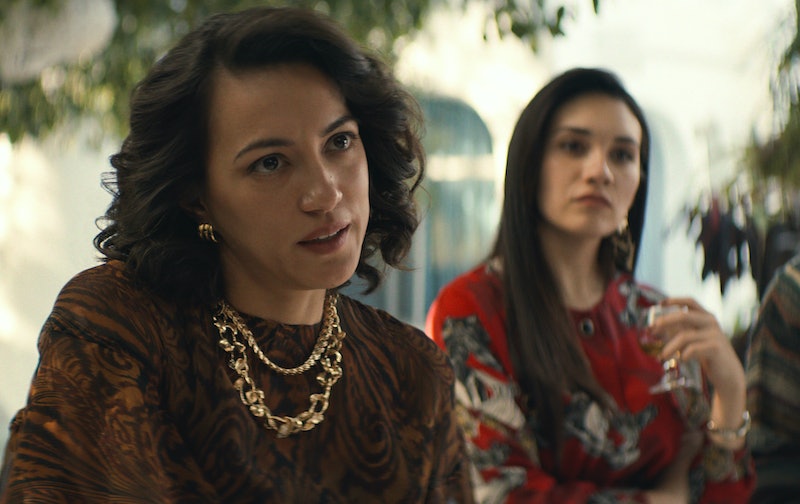 Although Miguel Ángel Félix Gallardo (Diego Luna) and later Joaquín "El Chapo" Guzmán (Alejandro Edda) are running the show in Narcos: Mexico, Enedina Arellano Félix has outlasted them all. The sister of Benjamín and Ramón Arellano Félix, Enedina took over the Tijuana Cartel after her brothers were taken out of commission, according to Time.

Ramón was killed during a police shootout in February 2002, per the Atlantic; a month later, their brother Benjamín was arrested by Mexican authorities. In 2012, he pled guilty to racketeering and conspiracy to launder money, per the L.A. Times, and was sentenced to 25 years in prison in April of that year. After he serves his time in the U.S., Benjamín will be relocated to Mexico, according to the article, where he will serve another 22 years.

After her two most powerful brothers were out of the picture, Enedina began shouldering more responsibility within the cartel. Since she studied public accounting in Guadalajara, according to a translated article from Proceso, Enedina was able to use that bookkeeping savvy when she began using storefronts like pharmacies for their money laundering operation, as reported by Time. The DEA considers Enedina to be the world's first female criminal leader, per Proceso. And while she hasn't made headlines in a few years, that just means that she is, by all accounts, still running the Tijuana Cartel.

"[Enedina] is an educated lady who took care of all of the administrative managements of money for her brothers," Robert Castillo, former Special Agent in Charge for the El Paso DEA office, told the San Antonio Express-News in 2015. He continued, saying that the Arellano Félix sister is known as "La Jefa" — or "The Boss" in English.

But while her brothers may have had a more violent reputation, Mike Vigil, DEA's former head of international operations, told Time that Enedina has steered the cartel away from gratuitous violence and back to their roots in drug smuggling. "She is not into the wars of her brothers. She is into making alliances and making money," Vigil said. "Her beauty may also have helped her make alliances with powerful traffickers such as Chapo Guzman." Although the article doesn't know her current marital status, Time claims that Enedina is twice divorced.

As for her onscreen counterpart, Enedina is played by the actor Mayra Hermosillo in Narcos: Mexico, who told La Razón in a translated version of her interview that people don't know very much about Enedina, "since she is not a 'celebrity' like many of the characters dedicated to organized crime."

The actor continued, saying that after she landed the Netflix role, several people recommended books and articles on the cartel leader. "What I discovered was that [Enedina] is a serious woman, who does not say bad words, is religious and does not like to solve problems with blood," Hermosillo told La Razón.

And since Enedina is, by all accounts, still "La Jefa" of the Tijuana Cartel in 2020, Hermosillo will likely have a job at Netflix for as long as the series airs.