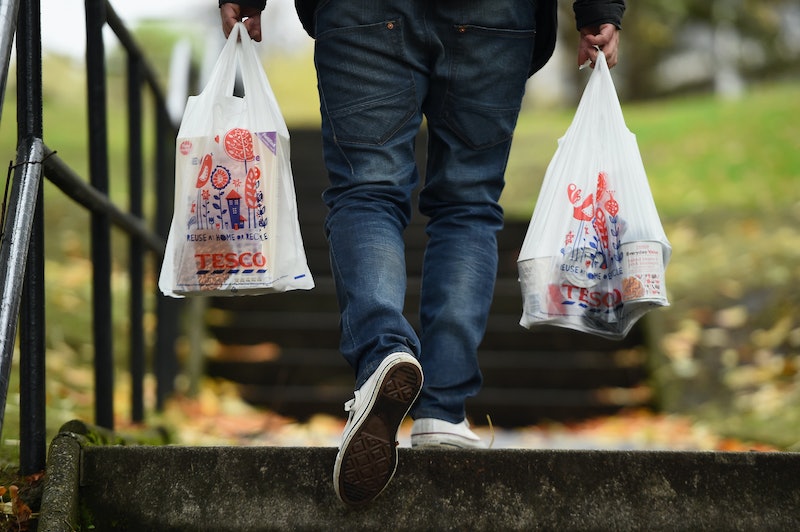 Over the last few years, Britain has tightened the regulations on single-use plastic as a response to the waste crisis as more oceans and landfills were becoming filled with plastic. We've been seeing fewer and fewer plastic straws floating around bars and, when it comes to supermarket shopping, things have really changed. For the better. Almost all big-name shops and businesses in England now charge somewhere between 5 and 10 pence for a plastic bag. And, thanks to these efforts, it appears plastic bag sales have halved in England in just one year. Finally, a news story to smile about.

On October 5 2015, a new law was brought into place that required all "large businesses" (retailers who have 250 or more employees) to charge 5p for single-use plastic bags. Gov.uk said of the initiative: "We want to reduce the use of single-use plastic carrier bags, and the litter they can cause, by encouraging people to reuse bags."

Now it looks like this initiative has worked, as the BBC reports that big supermarkets including ASDA, Marks & Spencer, Morrisons, Sainsbury's, the Co-op, Tesco, and Waitrose sold 549 million plastic bags in the year 2018-19. That may sound like a lot, but when you compare it to the whopping one billion plastic bags sold the pervious year, it's pretty impressive.

"WRAP [the Waste and Resources Action Programme] have previously reported that the main retailers in England issued 7.6 billion single use carrier bags in the calendar year 2014, before the carrier bag charge was introduced. Our data indicates that, in comparison to this, there has been a decrease of more than 90% of bags (over 7.1 billion bags less) in 2018 to 2019."

Metro reports that, on average, we now buy 10 plastic bags per year instead of the 140 bags we were buying in 2014. So it looks like storing all those plastic bags in cupboard and re-using them has finally paid off. According to the Guardian, the new environmental secretary Theresa Villiers said:

"Our comprehensive action to slash plastic waste and leave our environment in a better state continues to deliver results, with our 5p charge reducing plastic bag sales by 90% in the big supermarkets. No one wants to see the devastating impact plastic waste is having on our precious wildlife. Today’s figures are a powerful demonstration that we are collectively calling time on being a throwaway society."

In December 2018, the government released their environmental strategy for England. This details the plans in place for reducing plastic usage and the ban on straws, cotton buds, and plastic food and drink containers. This should help to combat plastic pollution, the report says, which is an issue which has been incredibly detrimental to our planet and wildlife.

CNN reports that sea birds are becoming smaller and more sickly due to ingesting the plastic that litters the seas and oceans. In addition, Dr Alex Bond, Senior Curator in Charge of Birds at the UK Natural History Museum, has said of the plastic crisis:

Although this is pretty shocking, it's good to know that the 5p plastic bag initiative has had a impressive impact in helping to reduce plastic pollution in England. Lets hope this continues.

More like this
Pret & Costa’s Coffee Is The Strongest On The High Street, According To Which?
By Sam Ramsden
Forestcore Is About To Take Over Your TikTok FYP
By Sam Ramsden
Here’s What TikTok's "Mascara” Trend Is *Really* About
By El Hunt
Ben & Jerry’s New Sundae Flavours Are A Chocoholic’s Dream
By Sophie McEvoy
Get The Very Best Of Bustle/UK
Sign up for Bustle UK's twice-weekly newsletter, featuring the latest must-watch TV, moving personal stories, and expert advice on the hottest viral buys.