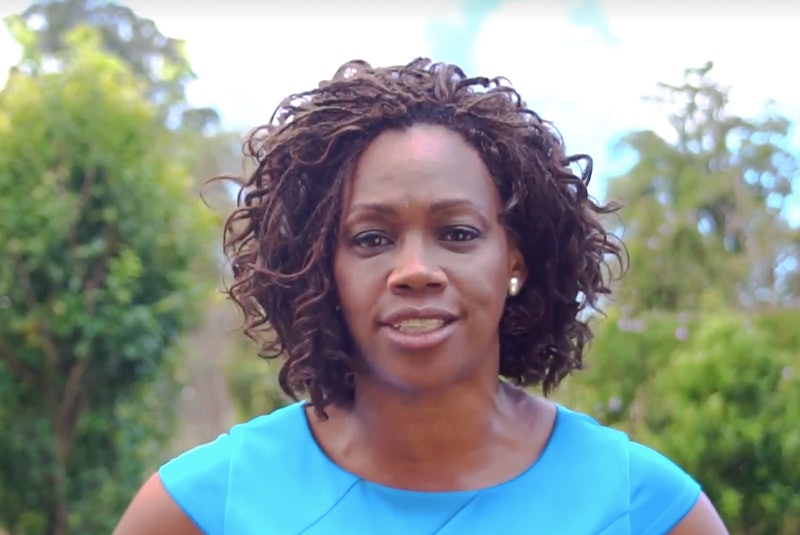 The winner of the Costa Rican presidential election, Carlos Alvarado Quesada, trumped his conservative, anti-gay opponent with double-digit margins. But perhaps the most impressive candidate of the race was his running mate. Vice President-elect Epsy Campbell Barr is the first woman of African descent to be elected vice president not just in Costa Rica, but anywhere in North or South America. And if that weren't impressive enough, you should hear her speak.

Campbell Barr is a lefty feminist economist and has spent her career in politics speaking out about racism and equal pay for women. She was one of the co-founders of the political party that won the election, the Citizen's Action Party, and she served in the Costa Rican legislative assembly from 2002 to 2006 and again since 2014. She has also headed groups like the Center for Women of African Descent, the Alliance of Leaders of African Descent in Latin America and the Caribbean, and the Black Parliament of the Americas, Jezebel reported.

But just hear what she said after her election to truly get a feel for the confident and prepared leader. She told CRHoy.com on Sunday — just before her win — what being the first black woman VP of Costa Rica would mean:

I wouldn't be the first only in Costa Rica, but in Latin America. And some day, if the president leaves the country, [I would be] the first woman of African descent to assume the presidency of a country in the entire American continent. It’s a big responsibility. But I've taken my political life as a great responsibility.

Campbell Barr continued, expressing how seriously she'll take her posting. "It is a responsibility not only to represent people of African descent but to represent all the women and men of the entire country, a country where a person like me is given the same opportunities," she told CRHoy.com.S

Campbell Barr noted that because she was given such opportunities, she wants to keep working, to make things better for all, in "a country that keeps having a place for women, a country that declares itself multicultural and multiethnic."

She sees the election as a turning point not just for her but for all women in the country:

May this be the opening of doors to many women in this country, not only to the one becoming vice president, but for many women, women of African descent, indigenous women, mestiza women, rural women, that they have the opportunity to be able to share power with responsible men. It would be a way to further Costa Rica's democracy, just as we reach 200 years of independence.

Costa Rica has been a trailblazer in advancing women and minorities in positions of power in government. The first woman of African descent in the legislature was Thelma Curling in 1982. The first woman to be vice president was Victoria Garrón (the outgoing Ana Chacón is also a woman). The very top spot was also a woman from 2010 to 2014, when Laura Chinchilla was president.

Campbell Barr was named after her paternal grandmother, who migrated from Jamaica with her husband. Born in San Jose, the country's capital, the vice president-to-be married young and had two daughters, Narda and Tanisha, around the time she started her university studies. She's experienced life as a working woman and mother, and that was a big message she shared during the campaign, too.

Before running, she also spoke out on racism in the country. Combined with her support for LGBTQ rights, this vice president seems well prepared to forge a progressive future in the region, one that could even extend beyond Costa Rica's borders.

More like this
Beyoncé & Madonna’s “Break My Soul” Remix Honors A Group Of Black Icons
By Stephanie Topacio Long
The 5 Best Hair Ties For Thick Hair, According To Reviewers
By Jenny White
'Yellowjackets' Just Announced Who’s Playing Adult Van & It’s Perfect
By Gretchen Smail
Everything You Need To Know About NYFW’s Spring/Summer 2023 Schedule
By Bella Gerard
Get Even More From Bustle — Sign Up For The Newsletter