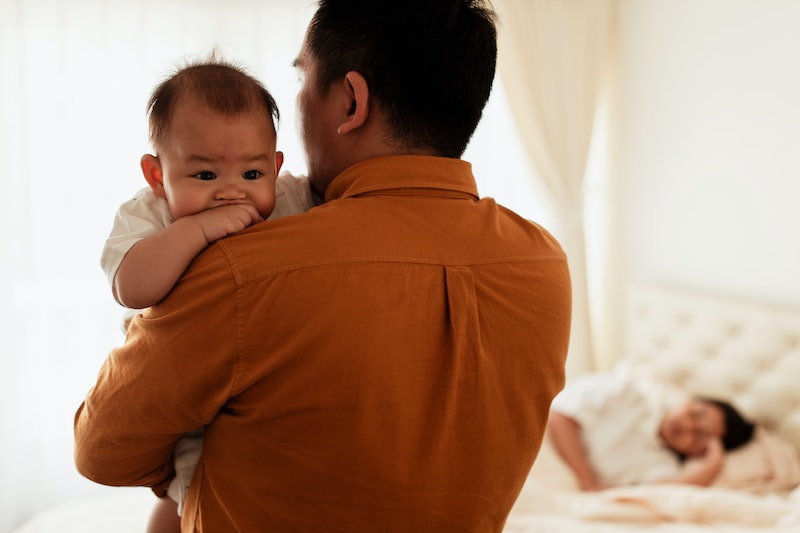 The gender wage gap is a serious problem across the world, with women consistently earning less than men. Data from 13 million employees in the U.S. in 2019 showed that, on average, women earn 79% of men's wages — and it's worse for women of color, who earn on average 4% less than white women. One of the major causes of the gender pay gap, according to experts, is the "motherhood penalty," where women are penalized in various ways in the job market after having children. One solution to the gap is emerging among researchers: non-transferable paternity leave for men.

The U.S. is the only industrialized country in the world without any kind of federal law guaranteeing paid parental leave for either parent. Experts tell Bustle that the lack of paternity leave could be a serious obstacle for parents in mixed-gender relationships to overcome the earnings gap caused by having kids.

"Motherhood penalties describe the systematic disadvantages mothers face in the workplace compared to childless women and men," Allison Dunatchik, a Senior Researcher at the National Center for Social Research who published a study on the motherhood penalty and paternity leave in 2019, tells Bustle. "Most explanations stem from the fact that even in 2019, mothers perform a disproportionate amount of unpaid work within the household, performing the lion’s share of childcare and housework even in two-parent households."

To cope with those responsibilities, Dunatchik tells Bustle, women often adopt strategies like temporarily leaving the workforce, reducing their working hours, or moving jobs to more family-friendly employers. "Each of these strategies tend to have negative consequences for women’s career trajectories and long-term earnings," she says. The impact of motherhood on wages can also be the product of discrimination. "Evidence suggests that employers tend to perceive mothers as less productive and less competent than men and childless women," Dunatchik says.

It's not just a problem for people in heterosexual relationships. These gaps also impact same-sex parents, though a 2019 study from Norway has shown that it doesn't affect them as deeply as parents in mixed-gender relationships. The gender pay gap is a product of patriarchy, so solutions tend to focus on the experiences of cis women co-parenting with cis men.

Over time, the motherhood penalty can be significant. A study in 2018 that focused on Denmark found that over time, mothers earned up to 20% less than men over time, whether the men were parents or not. Significantly, Denmark has generous parental leave policies, offering up to a year of paid leave to new parents — but their law allows the leave to be transferred between parents, and the study found that women would take the majority of the leave, with consequences for their earning later.

That's where the idea of the "daddy quota" comes in. Dunatchik and her co-author, Dr. Berkey Özcan, studied the effects of parental leave especially for fathers, where they couldn't transfer their time off to their partners. "We wanted to know whether policies incentivizing fathers’ participation in childcare could help to counteract some of the motherhood penalties women face in the labor market," Dunatchik tells Bustle. They studied the daddy quota in Quebec, Canada, which allows a new father five weeks of paid parental leave, over a period of five years.

However, they didn't find that the policy changed women's wages. "We didn’t find a significant effect on mothers’ earnings, which was a surprise to us," Dunatchik says, but the researchers think that time periods might be part of the issue. "It’s possible that a cultural change of this kind may take longer than the five years of data we analyzed after the policy’s implementation," she tells Bustle.

"I do think that daddy quotas and non-transferrable paternity leave policies have the potential to decrease motherhood penalties in women’s earnings over time," Dunatchik says, but notes that it's more complicated than it may seem. "Where paternity leave is unpaid or paid poorly and where eligibility requirements are high, few fathers take leave and the ones who can afford to do so generally come from wealthier, more privileged households." Another problem, she says, is whether paternity leave can exist with other family-friendly policies. "A generously paid paternity policy may be all well and good, but if childcare beyond a child’s first year is unaffordable or unavailable parents face difficult choices in how to reconcile work and care," she tells Bustle.

Paternity leave seems to be a good idea in general; a 2018 study found that it improves relationships between people in dual-income households. Its absence can also cement gender inequality in childcare. Claire, 35, whose partner took vacation time to care for their new baby as his company had no paid paternity leave, tells Bustle, "The lack of paternity leave reinforces the societal expectations that mum is the ‘baby expert’. Babies are hard. Without this opportunity for men to bond, to learn how to care for babies one on one, a lot of pressure gets put on the woman to do it all."

Over time, it seems, paid paternity leave reserved specifically for fathers may be one of the best ways to combat the penalties that entrench the gender wage gap for mothers. "When daddy quota policies — and work-family policies in general — intelligently address the full range of challenges working parents face, they have the potential to reduce the barriers mothers face in the workplace," Dunatchik tells Bustle. In the U.S., that's still a very long way away.

More like this
What Is Megan Thee Stallion’s Net Worth? The Traumazine Hitmaker Isn’t Worried About A Budget
By Hugh McIntyre
Gemma Collins' Net Worth Is Only Going Up
By Catharina Cheung
What Is Brad Pitt’s Net Worth? The Bullet Train Star Now Makes 8 Figures Per Film
By Hugh McIntyre
The Best Time To Date After A Breakup, According To Experts
By Bustle Editors
Get Even More From Bustle — Sign Up For The Newsletter