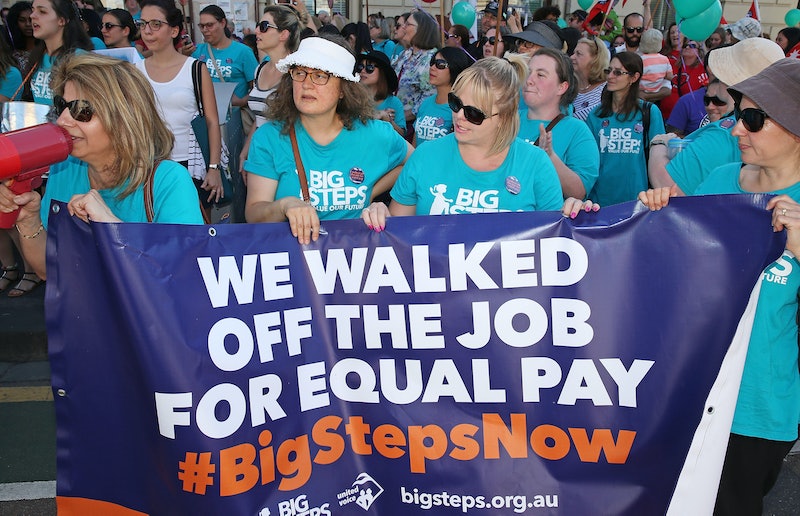 In case you missed it, Tuesday, Apr. 4, marks national Equal Pay Day. Created by the National Committee on Pay Equality in 1996 to draw attention to the gender wage gap, the date symbolizes just how far American women have to work into the year to earn what a man made the previous year. It's too depressing to be a holiday, per se — earning less than a man for equal work isn't really something worth celebrating — but the day is an important reminder that pay equity still hasn't been achieved in 2017.

Although the Equal Pay Act of 1963 aimed to end wage discrimination based on gender, research has shown that more than 50 years later, the wage gap remains a problem — and yes, that's after accounting for factors like education and choice of profession. The most commonly-reported statistic is that women are paid about 79 cents for every dollar a man makes in the U.S., but things are a little more nuanced than that. The size of the gap depends on a variety of factors, including location; in Wyoming, the state with the largest gap, women are paid just 64 percent of what men receive. Ethnicity also wields an enormous influence on women's wages — LatinX women, for example, earn 54 cents to a man's dollar, while the gap is much narrower for Asian women.

The wage gap remains a dismal situation, but that doesn't mean we can't gain inspiration about how to fight back from memes. Here are a few memes about Equal Pay Day to inspire you to fight back right now.