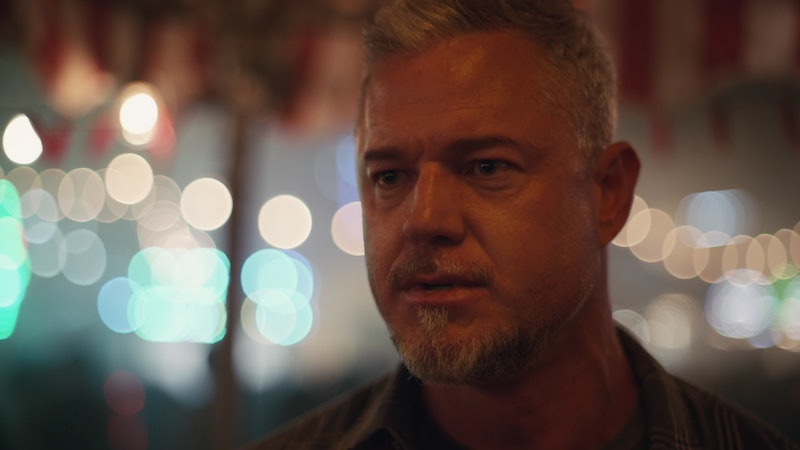 Euphoria’s Cal Jacobs and Grey’s Anatomy’s Mark Sloan are united by a common theme, and, no, it's not just that the same actor plays both characters. According to Eric Dane, his Euphoria and Grey’s Anatomy characters have one important thing in common: their bodies — or, more so, the way in which their bodies were introduced in their respective series.

Before Dane depicted Cal Jacobs, father of the irreverent Nate in HBO’s Euphoria, he memorably starred as Mark Sloan (best known as McSteamy), head of plastic surgery at the drama-filled Seattle Grace Hospital in ABC’s Grey’s Anatomy. In Grey’s, McSteamy was first introduced in a towel as he emerged from a steamy bathroom after a tryst with Addison (Kate Walsh). A ladies’ man, he inspired the formation of a Nurses United Against Mark Sloane group in the fictional hospital, and McSteamy was eventually killed off in the aftermath of a plane crash.

A parallel can be drawn to the introduction of Cal Jacobs in the HBO teen drama Euphoria. He’s first introduced in a seedy motel room for a tryst with new girl in town, Jules (Hunter Schafer). The circumstances are darker than McSteamy’s introduction, yes; but, in a new interview with Glamour, Dane broke down the commonalities between the contrasting characters. “Cal starts out like a punch in the face,” he told Glamour. “The common denominator is that I’m naked.”

Of course, there are perceptible differences in how these characters are presented in their respective shows. Dane added, “But it’s a lot deeper than that. With Mark Sloan, it was absolutely more of an aesthetic, and with Cal Jacobs it’s more [that] Cal wants to control and dominate.”

Cal Jacobs is a clear divergence from playboy Mark Sloan. On the surface, he's a family man who resides in a suburban haven and sells his famous chili at carnivals. Behind closed doors, however, is a man who meets up with strangers on dating apps for sex under the username DominantDaddy. Dane revealed to Glamour that while he considered the role a challenge, he was able to bring his own experiences into the mix. “I understand what it’s like to lead a double life,” he said. “To have secrets and to have to live keeping those secrets from people.”

He continued, “I’ve certainly had my struggles with alcoholism, drug addiction, mental health, and I know what it’s like to have to put up a facade and have an external experience not match the internal experience. I felt like that was my strongest asset in trying to articulate what the guy’s going through.”

Another major difference between playing Cal and Mark Sloane: the sex scenes. HBO's Euphoria pulls no punches, and Dane revealed that the network hired an intimacy coordinator for sex scenes to create a safe atmosphere while filming. He told Glamour of filming the scenes with Schafer, whose turn as Jules marks her first-ever role, “Part of my comfort comes from me being vigilant that my scene partner’s comfortable. Because if that person’s not comfortable, it’s going to create some discomfort for me and the sincerity and the intimacy isn’t going to be there.”

McSteamy and Cal might share a certain shirtless quality, but based on Dane's comments, that's about all they have in common.